Taiwan Needs to Become the Austria of East Asia 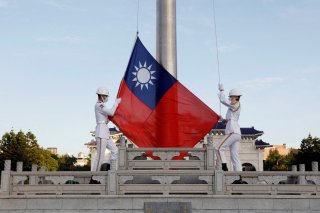 Tensions in the Taiwan Strait are rising fast and reaching alarming levels. The virulent reaction of the People’s Republic of China (PRC) to U.S. House speaker Nancy Pelosi’s visit to Taiwan caught even many veteran China observers by surprise. Not only were Beijing’s protests to the Biden administration more strident than before, but some of the warnings came from the highest levels. PRC president Xi Jinping stressed to President Joe Biden that the visit would encourage Taiwan’s separatists and significantly damage relations between China and the United States. He warned the United States not to “play with fire.”

Even more ominously, Chinese units conducted large-scale, live-fire exercises that encircled Taiwan. In at least one case, there are indications that a missile was fired directly over the island, landing in waters on the opposite side. Some sixty-eight warplanes and thirteen warships crossed the informal “median line” in the Taiwan Strait that both sides had respected, and which helps prevent incidents that could lead to an armed clash. Not only were the war games larger and closer to Taiwan than ever before, but they seemed designed to demonstrate that the PRC now had the capability of blockading or even invading the island.

If the harsh PRC response to Pelosi’s visit was designed to intimidate Washington or Taipei, the effort failed. The strategy of President Tsai Ing-wen’s government to seek more international space and respect for Taiwan (and push the envelope on independence) appears to be as strong as ever. Taiwan’s friends in the United States seem especially intent on having Washington treat the island as a democratic partner and a crucial U.S. economic and military ally. They want security cooperation with Taipei (which already has been rising for years) to become even closer. Since Pelosi’s visit, several more members of Congress have visited Taipei and held meetings with Taiwanese officials, despite Beijing’s escalating protests and the announcement of another round of military drills. Congress also is considering new legislation, the Taiwan Policy Act, which would fundamentally revamp U.S. policy toward Taiwan and gut Washington’s official “one-China” policy. Although the White House is quietly seeking to delay that measure, it will be under tremendous pressure to accept such changes.

The current trajectories of U.S. and PRC policies mean that the Taiwan issue now has a high (and growing) potential to trigger a disastrous war. As I warned in my 2005 book, America’s Coming War with China: A Collision Course over Taiwan, unless there were major policy changes in Beijing, Taipei, and Washington, war was almost inevitable at some point. The probability has grown, not receded, since then.

There is a solution that would prevent such a calamity while preserving the most crucial interests of both the United States and the PRC. Unfortunately, it is a solution that would require a swallowing of considerable national pride on Beijing’s part, and the abandonment of ambitions to use Taiwan as the key component of a strategy to perpetuate U.S. hegemony in East Asia on Washington’s part. Consequently, despite its extensive potential benefits for all parties concerned, it is extremely unlikely that U.S. and PRC leaders will embrace such a prudent compromise.

The best—perhaps the only way—to avoid an impending military calamity between the United States and the PRC is to adopt the Austria model for Taiwan. In a rare willingness to compromise, the Soviet Union and the Western powers agreed to restore a united Austria (which had been divided into several zones, each controlled by one of World War II’s victorious but now estranged allies). The 1955 treaty imposed strict neutrality on Austria, and thereafter, Vienna remained carefully aloof from the various Cold War power struggles that plagued most other portions of Europe. Indeed, Austria has attempted to maintain its neutral posture to this day.

Washington and Beijing could mandate a similar outcome for Taiwan—refraining from attempts to make the island an economic and strategic pawn for either side. It would, however, require an enormous concession by the PRC. Chinese leaders would have to explicitly relinquish the long-standing goal of compelling the Taiwanese to agree to political reunification with the mainland. That goal has become increasingly unrealistic in any case. Numerous public opinion surveys show that a massive majority of Taiwanese want no part of political unification with the PRC—under Beijing’s “one country, two systems” plan or any other formula.

Indeed, a sizable majority of people on Taiwan now identify solely as “Taiwanese,” not “Chinese”—or even the once-popular “both Taiwanese and Chinese” option. Taiwan has never been part of the PRC, and indeed, it has not been ruled by any government on the mainland except for a brief period after World War II. It has had a totally different political, cultural, and economic experience from that of the mainland ever since Japan wrested control of the island from China in 1895. Taiwan is now a vibrant Western-style democracy, and it would be a frustrating, ugly, and probably violent task for any PRC government to try to subdue and integrate the island’s population. Taiwan is not Hong Kong, and Chinese leaders make a tragic error if they assume it is.

Japan’s seizure of Taiwan is still an open wound for most Chinese. It was one of the most visible and humiliating examples of China’s “century of humiliation.” Recovery of Taiwan would put an emphatic end to that period when China was treated so badly. In addition to the issue of national pride, Chinese leaders recognize that Taiwan is a crucial strategic and economic asset. By virtue of its location alone, a foreign power controlling Taiwan keeps China’s military (especially naval) power contained behind the “first island chain.” Taiwan’s importance in advanced semiconductors and other arenas also makes the island a pivotal economic player. China quite understandably does not want the United States or any other great power rival dominating Taiwan.

But if Beijing wants to avoid a calamitous war with the United States, it will have to sacrifice some national pride and accept a less-than-optimal outcome. However, a guaranteed neutral status for Taiwan would secure China’s tangible, vital interests with respect to the island. Conversely, a war would be horribly damaging to those interests, even if the PRC eventually “won.”

Washington’s necessary sacrifice would be less visible, but it would be extremely significant. Accepting a strictly neutral Taiwan requires abandoning the goal of maintaining U.S. strategic primacy in East Asia and using the island as America’s unsinkable aircraft carrier. Taiwan could no longer be the leading edge of a comprehensive U.S.-led strategy to contain the PRC. Such a policy change by Washington would require accepting China as the leading power in the region—and that would involve swallowing more than a little American pride. It likely would require some additional substantive concessions as well, including recognizing at least some of Beijing’s territorial claims in the South China Sea and backing away from support for Japan’s claims to the Senkaku (Diaoyu) islands in the East China Sea.

As unlikely as it is in the short term that U.S. and PRC leaders will embrace the “Austria solution” for Taiwan, it is important to put the option out there for discussion. If Beijing and Washington do not ultimately make Taiwan the Austria of East Asia, it is hard to see how the current impasse over Taiwan will end peacefully. Only the timing of the military collision and the extent of the resulting tragedy remain in doubt.

Ted Galen Carpenter, a senior fellow in defense and foreign policy studies at the Cato Institute and a contributing editor at the National Interest, is the author of thirteen books and more than 1,100 articles on international affairs.