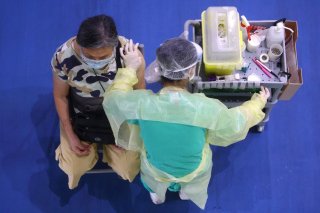 Amidst a global pandemic, the parallel universe in which Taiwan enjoyed a reprieve underwent a reality check in May 2021, when the spread of the coronavirus spiraled out of control for the first time at the local level. As a reaction to the bad news, Taiwan’s major stock index experienced two of the largest plunges in history later that same month, trading at record volumes. Similarly, according to Bloomberg’s COVID resilience ranking, Taiwan plunges into the bottom half of the ranking to the forty-fourth, accentuated by a lagging vaccination drive and a resurgent outbreak.

Since then, the coronavirus-induced death rate in Taiwan has surged past 4 percent, well above the global rate at approximately 2.2 percent. As a former role model in coronavirus prevention, Taiwan’s fall off the pedestal was largely due to the current administration’s complacency and myopia, which it contracted during Taiwan’s coronavirus-free experience for most of the duration since the global outbreak.

The evidence had been clear from the beginning that the cornerstone to returning to normalcy is a vaccinated population. Yet not only was the government behind in procuring vaccines for 23.5 million citizens, the Central Epidemic Command Center (CECC), Taiwan’s center for disease control, even rejected an offer by AstraZeneca to manufacture vaccines in Taiwan. In comparison to another fellow Asian country, Singapore has so far vaccinated 41.1 percent of its population to Taiwan’s single digital to date.

More notably, South Korea announced a vaccine partnership with the United States in May and has since emerged as a global vaccine production base with its fourth coronavirus vaccine contract manufacturing deal struck as of late June.

The United States also has a similar vaccine arrangement for the Quadrilateral Security Dialogue partnership between the United States, India, Japan, and Australia. Under this dialogue, the Quad will finance, manufacture, and distribute at least 1 billion doses of safe and effective coronavirus vaccines by the end of 2022.

India, the world’s vaccine leader, produces 60 percent of the world’s overall vaccine needs. The United States and Japan finance the initiative, India makes the vaccines, and Australia helps with the logistics and delivery.

All is not lost for Taiwan. A statement released by the White House on June 3 unveiled Washington’s strategy for global vaccine sharing. This was followed by a concrete reiteration by Jonathan Fritz in mid-June, where the deputy assistant secretary of state for East Asian & Pacific Affairs commented on plans for the United States to partner with Taiwan to manufacture and distribute vaccines.

Taiwan needs to seize this opportunity to end the vaccine drought for its population, and at the same time reinforce its Indo-Pacific strategic alliance with the goal of building resilience.

President Biden said that it is “an ambitious new joint partnership that is going to boost vaccine manufacturing for global benefits and strengthen vaccinations to benefit the entire Indo-Pacific.”

Taiwan and the United States’ partners can join together to launch an ambitious new partnership to boost vaccine manufacturing for the world’s benefit and to strengthen vaccinations to benefit the entire Indo-Pacific. Taiwan has much to offer these like-minded countries in achieving progress on health security while also standing to gain from this partnership—primarily by assuring Taiwanese that the island will not be short of vaccines in the years to come.

This is an opportunity for a global response to expand safe, affordable, and effective vaccine production and equitable access, to speed economic recovery and benefit global health.

As the former commander of The Central Epidemic Command Center during Taiwan’s response to H1N1 influenza during 2009, I know Taiwan offers a pharmaceutical capacity for vaccine rollout that could serve as a model for other places. Taiwan is a country with a universal health care system that ensures a digitized distribution network and stores patient data in a centralized manner. Domestically, such production facilities can also create jobs in management, quality control, and production that can benefit Taiwan’s economy.

Amidst the coronavirus pandemic, the world meets a single disease and finds a single fate. We are at a turning point in the search for good health and vaccination. So it was during the Spanish flu. So it was during H1N1. While people are now divided into the vaccinated and the not, we still stand united together. Because there is no Taiwanese problem. There is no American problem. There is only a world’s problem facing the pandemic. Taiwan is eager to be a solution to that problem. Given the opportunity, Taiwan has the power to help the United States. Together we shall overcome this pandemic by supporting a new global effort to manufacture and distribute vaccines.

Eric Chu is a former Chairman of Taiwan’s opposition Kuomintang.