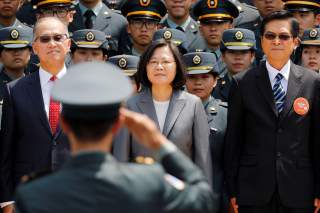 We’ve been hearing a lot lately about the rise of authoritarian governments. These administrations have been voted into office by their own citizens, sometimes in free and fair elections. Less talked about, however, is a democracy that is endangered by external pressure: Taiwan.

Since the victory of a presidential candidate it didn’t favor—the American and British educated Tsai Ing-wen—Beijing has been relentless in its pressures on this country of 23 million to join the People’s Republic of China (PRC). Speaking at the country’s rubber-stamp parliament in March, Chinese president Xi Jinping thundered that Taiwan would “face the punishment of history” for insisting on its independence. Chinese planes have circled the island menacingly, as have its navies’ ships—in the words of one observer, like a dog marking out its terrain. The increasing tempo of these, as well as improvements in the capabilities of the ships and planes taking part, have prompted concerns in Taiwan’s defense ministry that even the island’s eastern flank, heretofore considered a safe zone, was no longer so.

Less headline-worthy but at least as dangerous, Chinese pressure forced the World Health Organization to bar Taiwan from its deliberations. A specialized agency of the United Nations, the WHO plays a major role in efforts to curb the spread of infectious diseases from one country to another. In this era of ubiquitous air travel and major population movements, excluding any country for whatever reasons could have severe consequences not only for that country but for the world at large. Likewise, and with similar potential for disaster, China has made sure that Taiwan cannot join international aviation agreements or Interpol.

Four countries—Gambia, Sao Tome and Principe, Panama and Burkina Faso—have broken diplomatic relations with Taiwan, lured by promises of lucrative business deals with China, and also reportedly by bribes to leaders. Beijing has hinted that more will follow. Negotiations with the Vatican, Taiwan’s last remaining European ally, are ongoing. Several countries have been told to remove Taiwan’s trade offices from their capital cities and even to change their names. The name changes are part of a larger effort to “disappear” Taiwan: under pressure from China, the huge Marriott hotel chain changed the name on its website from Taipei, Taiwan, to Taipei, China. Forty foreign airlines were ordered to do the same if they wished to continue flying to Chinese destinations. Most, including those of the United States, fearing the costs of losing business to a market of 1.4 billion people, quickly complied, despite Washington bluntly terming the Chinese order “Orwellian nonsense.”

The soft-spoken Tsai, Asia’s first female president, has several times indicated her desire for negotiations with China, but has been spurned, with her overture rejected as “an incomplete test paper.” The price of talks, Beijing made clear, is Tsai’s acknowledgement that Taiwan is part of China—in essence, requiring her to giving away her negotiating position as a precondition for negotiation.

Meanwhile, China has increased its attempts to subvert Taiwan from within. Through the Chinese Communist Party’s United Front Work Department (UFWD), which is responsible for operations that influence the politics of foreign countries to support party policies, Taiwan’s Communist Party and its New Party, which espouse unification with China, are lavishly funded even though they get very few votes. Both are perfectly legal under Taiwan law, although not all of their activities are. In late 2017, investigators searched the residences of four prominent members of the New Party, retrieving materials supporting allegations that it had founded a paramilitary youth association with the goal of “wartime control.” One has been convicted of approaching Taiwan military officers for classified information; three others have been indicted for acts endangering national security.

The focus of China’s UFWD work appears to be the “independence by nature” generation, meaning those who came of age after the lifting of Taiwan’s emergency decrees, sometime referred to as martial law. They have no memories of life in China, have grown up under a democratic system, and see no need to declare an independence the country already enjoys. To this end, the UFWD sponsors “exchange” tours to China by Taiwanese students, their teachers, and principals. It has established a Student Baseball League in Shenzhen—the game being very popular in Taiwan—in which players compete against the backdrop of a large banner reading “both sides in the Taiwan Strait are one family.” In a democracy, these can be difficult to stop: subsidized travel is popular, as is the gracious hospitality they receive. When parents of elementary school children protested against plans for a school trip to participate in Shanghai’s “Angel of Peace Exchange,” a principal explained that China had shown “goodwill” by agreeing to remove “controversial slogans and phrases” from the agenda, and the trip proceeded as scheduled.

At the tertiary level, students from Taiwan are offered scholarships at China’s most prestigious universities. Already, according to China’s official press agency, two Taiwanese studying at China’s highest rated institution, Beijing University, have applied to join the CCP, one of them vowing his fervent desire “to become a participant in the mainland’s joint rejuvenation.” The large number of PhDs from Taiwan universities who have not been able to find employment there have been offered jobs in China. In January, Taiwan-born Hsieh Kuo-chun was selected to the top advisory board of the CPPCC, the non-party institutional face of the united front.

Since the bulk of Taiwan’s trade is with China, special attention has been devoted to business people. Those who endorse policies favorable to China receive appointments to PRC organizations and favorable treatment for their investments; those who do not find opportunities cut off. Although Taiwan is forbidden to participate in China’s One Belt One Road scheme, compliant individual companies may be granted exceptions. With billions of dollars at stake, the lure can be difficult to resist.

The United States, bound by congressional legislation to make sure that any resolution of Taiwan-China differences is peaceful and consonant with the wishes of the people involved, has expressed both concern and reassurance. In May, in a belated but nevertheless welcome acknowledgement of China’s actions, a State Department spokesperson accused China of unilaterally altering the status quo across the Taiwan Strait, thereby “undermining the framework that has enabled peace, stability, and development for decades.” A few months earlier, Congress passed, and President Donald Trump signed, the long-delayed Taiwan Travel Act, which facilitates the exchange of high level officials between Washington and Taipei. An agreement has also been reached to share information that would allow representatives of Taiwan’s research institutions and its Ministry of Defense’s Armaments Bureau to visit their counterparts in the United States for collaborative projects.

In June, America’s new embassy-equivalent in Taipei was dedicated, with de facto ambassador Kin Moy lighting incense, bowing three times, and vowing “I offer [this building] as a tangible symbol that America is here to stay.” And National Security Adviser John Bolton has said it may be time to rethink the basis of America’s China policy. In the Senate, bipartisan legislation seeks an investigation into Chinese political influence in the United States, which includes efforts to change its policy toward Taiwan. Similar investigations have been taking place in Australia and New Zealand.

Clearly Taiwan is not alone. Let us endorse these efforts, lest our own democracies be subverted as well.

June Teufel Dreyer is professor of political science at the University of Miami and a past commissioner of the U.S.-China Economic and Security Commission.