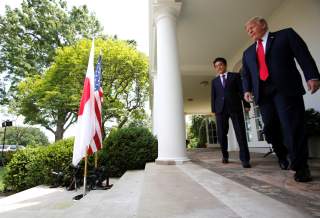 Japan’s Prime Minister Abe faces a major political warfare campaign as he labors to defend Japan’s security interests through the normalization of Japan’s armed forces. He faces a small, but powerful, radical-left domestic minority that desires a weak, neutralized Japan. In addition, nearby hostile totalitarian regimes benefit from, and support, these radicals.

While the world generally benefits from an assertive, proactive, and militarily capable Japan, and Taiwan, also called the Republic of China (ROC), especially needs such a Japan. This is because together Japan and the ROC represent a higher manifestation of individual liberty, consensual government, and rule of law than most countries in the world. They demonstrate how free peoples can govern themselves and prosper in a very tough neighborhood—in close proximity with two of the world’s most ruthless totalitarian regimes.

Furthermore, the ROC benefits from a Japan that works effectively with its only treaty ally, the United States. While the relationship looks good on paper, there are vexing shortcomings in the security alliance and with Japan’s defense structure that could have devastating consequences. Japan still has not implemented a coherent national-defense strategy and its forces face major shortfalls in funding, manpower, communications, doctrine, training, and weapons and equipment.

Just as important, U.S.-Japan-ROC strategic communications efforts need to be better led and coordinated to help fight the efforts to break up these alliance. This threat comes from both radical activists within Japan and the People’s Republic of China’s (PRC) Political Warfare operations designed to “disintegrate” these PRC “enemies.”

Japan faces security challenges from all of its immediate neighbors. The most imminent challenge is the PRC which, by any objective assessment, is an expansionist, coercive, hyper-nationalistic, brutally repressive and totalitarian state. Japan is reminded daily through the PRC’s bombastic propaganda organs that the PRC is now militarily and economically powerful, eager to avenge Japan’s brutal past imperialism, and planning to take Japan’s territory such as the Senkakus and Ryukyus.

But also in the neighborhood is totalitarian North Korea, a slave state whose crimes against humanity are well documented by the United Nations and which also has intense historical grievances against Japan. Also, two other neighbors occupy lands and adjacent waters claimed by Japan: the Republic of Korea occupies Takeshima Island, and Russia occupies Japan’s Kurile Islands, its northern territories. As nuclear powers, Russia and North Korea, like the PRC, are each capable of destroying Japan as a civilization within minutes.

The status of the ROC also poses a serious challenge for Japan, in that the PRC occupation of Taiwan would severely compromise Japan’s southern flank and lead to increased pressure on its territorial integrity. Economic, psychological, and other damage from Taiwan “going Red” would also be severe. But, given the existing political environment dictated by Beijing, Japan is limited in its public cooperation with the ROC on common security issues.

The PRC threat to the ROC is well known, of course. In the name of a so-called “China Dream,” the PRC is engaged in an all-encompassing campaign to bring the ROC into its tender embrace. In its relentless war against the ROC, the PRC employs economic, informational, political and military warfare on a daily basis. All these means are destabilizing and demoralizing, but it is the military tool that is of most concern:. For example, PRC ruler Xi Jinping has ordered the People’s Liberation Army to be able to invade and secure Taiwan by the year 2020—just two years from now.

Under these circumstances, Japan’s security is inextricably linked to Taiwan’s security, and vice versa. Consequently, Taiwan needs a militarily capable Japan, and one with improved military interoperability with the United States.

Shinzo Abe, Japan’s strongest prime minister in decades, recognizes the threats facing Japan, and has taken substantial steps to address shortfalls within his limited political maneuvering space. He has ordered two revised National Defense Program Guidelines, revised the U.S.-Japan Guidelines for Cooperative Defense, spearheaded the 2015 Legislation for Peace and Security, and pledged to amend Article IX of the Constitution to codify the Japanese Self-Defense Force’s (JSDF) existence. In addition, Abe has begun preparing a significant new Midterm Defense Plan that will guide defense projects and acquisitions essential to high-end warfare.

Abe’s Japan: Neither Fascist nor Pacifist

While there are some genuine pacifists in Japan who sincerely question the need for defense reform, it is Japan’s radical activists (kagekiteki katsudoka) that generate the most hysteria. In their worldview, Abe’s efforts will upend Japan’s “pacifist” tradition and lead it to fascism and rapacious regional conquest. But Japan is not pacifist, nor is Japan’s kagekiteki katsudoka.

Japan is now a peaceful nation. After a particularly vicious era of near-genocidal rampage followed by U.S. military occupation and democratic reform, Japan has not fought in a foreign war in seventy-three years. It has been a role model in international aid, in foreign-direct investment and in humanitarian actions. Japan’s pacifism post–1945 is a curious mix of moral posturing buttressed by a large defense establishment and reliance on the U.S. military force to obliterate any country that threatens Japan.

Despite its “peace constitution,” Japan quickly built a real military after North Korea (NK) invaded South Korea in 1950. At the request of UN forces, Japan dispatched minesweepers to support the fight. From early on, the JSDF was an armed force in the sense most nations understand the term, even if it has been subjected to increasingly restrictive interpretations since.

In Japan, communists and other far-left activists protested Tokyo’s support for the UN forces fighting NK-PRC-USSR aggression. As they protested against Japan’s support in defense of South Koreans from one of the more oppressive, murderous states in world history, the kagekiteki katsudoka set their pattern for the rest of the Cold War and its aftermath: attack and undermine liberal democracies and provide support for communist dictatorships. They always accuse the democracies of militarism and fascist aggression, while ignoring (or defending) hyper-nationalistic, fascist aggression from communist dictatorships.

The Japan-America Security Alliance (JASA) has provided security and prosperity to the Asia-Pacific region for nearly sixty years, and enabled the “free world” to win the Cold War against the Soviet Union. However, the JASA presently lacks a unified strategy to meet the threat from the PRC, and to support democratic ROC.

Regarding Taiwan’s security, Japan and the United States could help the ROC defend itself by addressing the suffocating isolation that the PRC is inflicting on an embattled democracy. Overcoming this isolation requires authorizing considerable leeway for JASA’s military forces to engage with the ROC’s military. The JASA forces can do this separately and bilaterally, and can also conduct trilateral or even multilateral engagements, such as Rim of the Pacific (RIMPAC) exercise.

Concurrently, JASA military forces must work better together, and the JSDF must become more effective. The JASA looks good on paper, but there are significant shortcomings in Japan’s defense structure in alliance management. For instance, Japan still has not implemented a coherent national-defense strategy and its forces face major shortfalls in funding, manpower, communications, doctrine, training, and weapons and equipment. Further, there is not yet an alliance coordination mechanism that allows Japanese and U.S. forces to interoperate effectively as there is in Korea and NATO.

A solidly linked JSDF and U.S. military (with the strong political ties that come of this relationship) that works with the ROC military would send a tremendously strong message to Beijing that it cannot successfully coerce or threaten force against the ROC.

This potential trilateral strength is one major reason for why pro-PRC radical activists try so hard to undermine the alliance.

If, as Clausewitz wrote, “war is the extension of politics by other means,” then it’s fair to say that the PRC’s political warfare (PW) is “an extension of armed conflict by other means.” A useful definition of PW is “those operations that seek to influence emotions, motives, objectives, reasoning, and behavior of foreign governments, organizations, groups, and individuals in a manner favorable to the PRC’s objectives.”

It is important to note that the PRC’s version of PW is all encompassing. It is “total war” that goes beyond traditional liaison work (building coalitions in a “united front” to support the PRC and to “disintegrate” enemies) and the “three warfares” (strategic psychological warfare, overt and covert media manipulation, and use of “lawfare”) to include use of violence and other forms of destructive attacks.

The PRC’s PW has been especially effective over the past decade, particularly in weakening America’s already faltering status and alliances in Asia during the Obama administration. In Japan, it has successfully exploited anti-defense and anti-bases organizations in Japan to obstruct military reform and paralyze the long-delayed relocation of Marine Corps Air Station Futenma from crowded mid-Okinawa to the less- populated northwest part of the island.