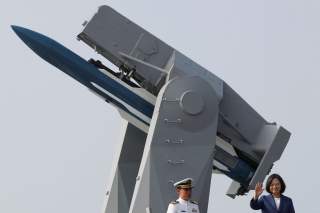 On November 24, millions of Taiwanese will go to the polls to vote for mayors and councilors in the “nine-in-one” nationwide local elections held every four years. Seen as a mid-term for President Tsai Ing-wen of the Taiwan-centric Democratic Progressive Party (DPP), this year’s local elections have also gained attention due to the level of Chinese interference involved.

In the previous local elections, the DPP and ideologically-aligned candidates made significant gains over the then-ruling Kuomintang (KMT), continuing a political realignment that had begun with the Sunflower Movement in the spring of 2014. That movement built momentum for the January 2016 general elections, which saw Tsai ascend to the presidency and, for the first time in the nation’s history, the DPP gain a majority of seats in the Legislative Yuan, Taiwan’s parliament.

The upcoming November 24 elections occur amid criticism over domestic reforms and impatience, within the more extremist “deep green” camp, that the Tsai administration has failed to do more to counter an aggressive China and secure Taiwan’s position within the international community. Some, frustrated with her adherence to the Republic of China (ROC) constitutional order, have unfairly accused her of being a “closet KMT” and an “opponent of independence.” For their part, more pragmatic voices in Taiwanese politics, as well as government partners overseas, have argued that President Tsai has successfully struck a healthy, and admittedly difficult, balance between asserting Taiwan’s sovereignty and reassuring its allies that Taiwan will not spark a crisis in the Taiwan Strait.

The local elections are, of course, being waged primarily over local concerns, and it would, therefore, be a mistake to analyze them solely through the prism of cross-Strait or foreign relations. Still, the outcome of those elections and the political balance will inevitably have repercussions for the incumbent government’s ability to maintain the course—and for its re-election bid in the January 2020 general elections.

Coming into the November elections, the DPP controls thirteen of a total of twenty-two municipalities, cities, and counties—including four of the nation’s six special municipalities—with three held by independent candidates (including the capital, Taipei) and six by the opposition KMT. Close races have developed in New Taipei City, where incumbent KMT mayor Hou You-yi is in a heated battle with the DPP’s Su Tseng-chang, a former premier. Other close races have developed in Taichung, where the DPP’s Lin Chia-lung faces off against Lu Shiow-yen of the KMT, and in the southern port city of Kaohsiung, where the DPP’s Chen Chi-mai’s lead over his KMT opponent, Han Kuo-yu of the KMT, has been narrowing.

Amid the electoral frenzy, Taiwan’s Ministry of Justice Investigation Bureau (MJIB) revealed it was investigating thirty-three cases of suspected Chinese funding of various candidates, with a focus on four key municipalities. Much of the illegal funds, according to the MJIB, come from the State Council’s Taiwan Affairs Office, which relies on Taiwanese businesspeople to distribute money to favored—and ostensibly pro-Beijing—candidates (known as “little brothers”). Taiwan’s intelligence agencies have also confirmed that China-based “troll factories” and “content farms,” many of them with ties to the People’s Liberation Army (PLA) Strategic Support Force, have also engaged in a massive disinformation campaign to influence the elections.

Additionally, the China Unification Promotion Party (CUPP), which works as a proxy of the Chinese Communist Party (CCP) in Taiwan and has fielded candidates in some elections, has also rallied behind non-DPP candidates nationwide. Even more marginal pro-Beijing groups, such as the Concentric Patriot Association of the ROC (CPAROC), whose members have a long history of physically assaulting Falun Gong practitioners and holding pro-Beijing rallies at various popular spots in Taipei, also have candidates in the election.

Earlier this year, the CUPP and its ideological ally, the New Party, were raided by prosecutors over suspicions that they may be receiving illegal funding from China. Triad crime organizations working in partnership with the CUPP have also resorted to intimidation in some of the local races, including Changhua, where members were reportedly paid NT$1,000 each to turn up at rallies held by DPP politicians and wear CUPP blazons. Police raids against such groups have uncovered People’s Republic of China (PRC) flags, CUPP apparel and an assortment of baseball bats. Underground gambling, which is also controlled by organized crime, have also run election bidding in Kaohsiung and elsewhere whose effects could distort voter decisions. For instance, the DPP’s Chen’s lead against the KMT’s Han has dramatically increased the value of an—until recently highly improbable—Han victory, with rigging compelling participants to only bid on Han.

According to Taiwanese law-enforcement authorities, Beijing is replicating tactics utilized by Russia to influence elections in Crimea and the United States. Moreover, the PRC regards the November 24 elections as a trial run ahead of the 2020 elections, in which it will seek to install a pro-Beijing candidate. After all, following Tsai’s election in 2016, Beijing already stated its intention to ensure she would be a single-term president.

Much of the disinformation, whether it originates in China or within Taiwan, has targeted the Tsai administration. Using traditional media, content farms, as well as popular social media platforms like Facebook, Line groups and the PTT bulletin board, Chinese disinformation has sought to exploit and to widen, contradictions within Taiwanese society. This is intended to further isolate President Tsai, who according to various assessments (including this author’s) is the largest obstacle to Beijing’s political objective of “peaceful unification.” Dissatisfaction within the “deep green” camp, which has resulted in protests, calls for referenda and a narrative which depicts the DPP as “no better” than the “pro-Beijing” KMT, therefore presents another tempting target for Beijing. All of this creates a ripe environment for the spreading of disinformation, this even though the CCP and the “deep greens” could not be any more distant ideologically, the former seeking unification while the latter is fundamentally pro-Taiwan independence.

Thus, the November 24 elections represent a new instrument by which to assail the Tsai administration. Major DPP losses in the elections—for example, Kaohsiung going over to the KMT, or Taichung suffering a similar fate—could, with a strong injection of propaganda and disinformation into Taiwan’s media bloodstream, exacerbate views within the green camp that President Tsai has failed as a leader. Such a view would amplify calls for another, less careful, candidate to run in her stead in the 2020 general elections. Such an electoral outcome could also shift disillusioned voters away from the DPP and toward populist independent candidates, some of whom, like Taipei mayor Ko Wen-je, have already received Beijing’s backing for 2020. (So far Ko, who is expected to win re-election in the capital, has not signaled his intention of running for president, but this could change over the coming months.

Adding to this complex mix are conservative groups, most of them Evangelical Christians as well as the traditionally DPP-allied Presbyterians, who have also threatened to boycott the elections to punish the DPP over its support for marriage equality, a promise it made during the 2016 election campaign. Referenda will be held concurrently with the November 24 elections on same-sex marriage and gender education. Those issues have also become targets of a very active disinformation campaign, with reports suggesting possible Chinese involvement.

In all, while the DPP will conceivably lose a few municipalities, the outcome of the November 24 elections will not, in and of itself, radically transform the political map in Taiwan. That is in part due to a highly disorganized KMT, which since its substantial defeats in 2014 and 2016 has yet to regain its footing. So disorganized is the KMT that the PRC’s Chinese Communist Party itself has ceased to regard it as a suitable partner for unification, choosing instead to collaborate with independent candidates and other United Front proxies in Taiwan, such as the CUPP. Still, Beijing would regard victories by Ko in Taipei and Han in Kaohsiung (bei-ko-nan-han, 北柯南韓) as a positive outcome, given the two candidates’ malleability and anti-democratic tendencies. Han, for example, told an interview recently that if he were elected mayor, he would ban all protests political and ideological in the city, comments which he eventually had to retract.

What the November 24 elections offer instead is an opportunity to amplify negative perceptions of the Tsai administration within her camp and thereby lower her chances of being chosen as her party’s candidate in the 2020 presidential elections. A less careful DPP leader, one who perhaps acts upon the demands of the “deep green” camp (as former president Chen Shui-bian did in 2005), would quickly derail the careful, and by design quiet, diplomatic web that her administration has woven with key international partners since 2016, returning to international isolation. A more radical DPP candidate would also have slimmer chances of being elected than Tsai, as the latter’s middle-of-the-road policies successfully appealed to “light greens,” “light blues” and the important group of “swing voters,” which could then result in either a KMT victory or the highly dangerous election of a populist candidate with no party affiliation. Finally, the election of a more radical DPP candidate in 2020 would embolden more hawkish elements within the PRC to intensify Beijing’s crackdown against Taiwan, their “defensive” actions thus “justified” by Taiwan's “provocative” actions.