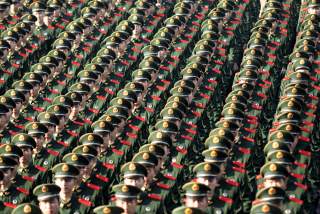 As East Asia and the world continue to turn their attention toward the escalating nuclear crisis on the Korean Peninsula, Beijing has taken advantage of the distraction to move forward its agenda of a “China Dream” of regional hegemony. This dream envisions a China restored to what is viewed as Beijing’s rightful place of domination of the Asian continent while American economic and military power and prestige recede back across the Pacific.

Taiwan has long been the ultimate prize for Chinese military irredentists. Just two weeks ago, Beijing demonstrated its contempt for Taiwan by launching new civilian air routes in the Taiwan Strait (the northbound M503 flight route along with three east-west extension routes—W121, W122 and W123) without any prior consultations with Taipei. The M503 route is close to the Taipei Flight Information Region (Taipei FIR) while the western routes pass by defensive positions on Kinmen and Matsu, Taiwan’s offshore islands. The Taipei FIR provides services for nearly 1.5 million civilian flights annually which carry nearly sixty million passengers, including over half-a-million American travelers.

Beijing’s latest arbitrary and unilateral action also runs counter to the assurances given in the March 2015 agreement between the Taipei Airlines Association and the China Air Transport Association. Taiwanese president Tsai Ing-wen immediately tweeted her strong response, and pledged that Taiwan will continue to “safeguard the status quo” while calling on “all parties to do the same.”

Meanwhile, Beijing has increased its military overflights of Taiwanese airspace. Last month, Newsweek magazine reported that the People's Liberation Army sent fighter jets, bombers and surveillance aircraft to patrol in the vicinity of Taiwan on December 11, 2017. The article noted that “The ‘island encirclement patrol’ took place after a senior Chinese diplomat threatened that Beijing would invade Taiwan if any U.S. warships made port visits there.”

In recent months, both David Ignatius and Josh Rogin of the Washington Post have published articles expressing concern over the aggressive influence operations undertaken by China to sway American public opinion. Unlike the Kremlin's alleged meddling in the 2016 Presidential election, Beijing carried out its actions in careful disguise through funding research projects at leading think tanks and universities.

This is not an American problem alone. Taiwan has been put under increasing pressure by China's overbearing tactics. Beijing has attempted to use tourism as an economic weapon, cutting Chinese group tours to Taiwan by an estimated thirty percent. It has also initiated programs to entice Taiwan's young and brightest talent via a brain drain. All of these are manifestations of China's soft-hard two-handed approach toward the free and democratic island.

Beijing has also put the squeeze on multinational corporations who do not toe its ideological line regarding Taiwan. According to a January 15 article in the Financial Times, Beijing shut down “the Chinese website of US hotel chain Marriott International for one week after it described Tibet, Hong Kong and Taiwan as separate countries in an email to customers.” Delta Air Lines, Zara and Medtronic have all bowed down before Beijing's throne in recent weeks by amending their websites and issuing public apologies.

Taiwan's cabinet-level Mainland Affairs Council (MAC) said January 17 that the Chinese military threat and continued efforts to suppress Taiwan’s international space jeopardize regional peace and stability. The MAC called on Beijing to respect Taiwan’s dignity and the rights of the people, to face the reality that the two sides are under separate rule, and to support cross-Strait dialogue without preconditions.

It is in the national interest of the United States and other like-minded democracies to preserve the peace and prosperity of the Asia-Pacific region by countering Beijing’s crude attempts to bully its neighbors. The use of such provocative, extralegal methods as those described above to manipulate public opinion and to seek to dominate a fellow democracy run counter to American core values and interests. Beijing must come to realize that these are not the actions of a responsible stakeholder.

Dennis P. Halpin is a Visiting Scholar at the U.S.-Korea Institute (SAIS) of Johns Hopkins University.