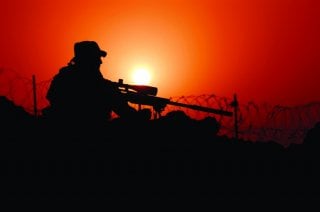 Editor’s note: Please also see the author’s postscript to this article, which discusses the events that have taken place in Iraq and Washington since this issue went to press.

IN JUNE, the jihadist organization now calling itself the Islamic State staged a stunning series of operations to capture large swathes of territory in northern Iraq. In the span of just a few days, the militants seized Mosul and Tikrit and continued marching south. Some observers feared that the Iraqi state itself might collapse completely.

Washington quickly scrambled to try to reverse these gains and bolster the Iraqi government. It sent multiple teams of military advisers to Iraq and positioned more intelligence, surveillance and reconnaissance units in the area. The Department of Defense also announced that it was considering conducting air strikes against the Islamic State in order to break the group’s momentum.

Among those in the U.S. government who must have been scrambling in the aftermath of this advance were the Obama administration’s lawyers. In a strange turn of events, there were in fact three separate legal rationales that could have potentially served as the basis for using military force in Iraq. The first was the president’s power as commander in chief under Article II of the Constitution. The second was the Authorization for Use of Military Force (AUMF) passed in response to the terrorist attacks of September 11, 2001. And the third was the 2002 AUMF that authorized the Iraq War—a war that President Barack Obama had already declared over years before.

At a meeting with congressional leaders in mid-June, Obama reportedly told those present that he did not believe the military options that he was considering required any further congressional authorization. Several senior congressional figures of both parties—including Senate Majority Leader Harry Reid, House Minority Leader Nancy Pelosi and John Thune, the GOP’s third-ranking senator—all suggested publicly that they agreed with this assessment. Jack Goldsmith, a Harvard law professor and former head of the Office of Legal Counsel, likewise argued that same month that “the 2002 Iraq AUMF almost certainly authorizes the president to use force today in Iraq.”

The two AUMFs and the conflicts they underwrote have played an outsized role in the past thirteen years of American foreign policy. Yet both pieces of legislation have also evolved in deeply problematic ways since their passage. One has served as the basis for a conflict surrounded by such a degree of secrecy that many basic facts concerning its scope remain unknown. The other, passed to authorize a war that many Americans would come to think was over, lapsed into disuse and was overlooked by all but a few—but still stayed on the books, with the potential to provide the legal grounds for a future, renewed war in Iraq. Together they tell a story of dangerous drift.

THE 2001 AUMF WAS passed by both houses of Congress with only a single “no” vote between them on September 14, and signed into law by President George W. Bush on September 18. Its central clause gives the president the power to

Today, the legislation is understood to authorize force against the Taliban, Al Qaeda and their “associated forces.” It has been used as the legal basis for the war in Afghanistan, the continued detention of prisoners at Guantánamo Bay, and the targeted-killing campaign that the United States has conducted in Pakistan, Yemen and elsewhere.

The Obama administration’s public statements on the scope of the 2001 AUMF have often been vague, but they suggest that its interpretation of the law is quite expansive. At a May 16, 2013, hearing of the Senate Armed Services Committee, Senator John McCain asked Robert Taylor, the acting general counsel of the Department of Defense, whether the AUMF could “be read to authorize lethal force against al Qaeda’s associated forces in additional countries where they are now present, such as Somalia, Libya, and Syria.” Taylor replied, “On the domestic law side, yes.” At the same hearing, Senator Lindsey Graham asked if the president had the authority to “put boots on the ground” in Yemen or the Congo, and Michael Sheehan, the assistant secretary of defense for special operations and low-intensity conflict, answered, “Yes, sir.” Sheehan later attempted to revise this answer, saying, “When I said that he did have the authority to put boots on the ground in Yemen or in the Congo, I was not necessarily referring to that under the AUMF.” But he never stated explicitly that the AUMF would not provide the president with that authority, or clarified what the alternative source of authority would be.

Adding to the confusion is the fact that the administration has refused to tell the public the names of the groups that it considers to be covered under the 2001 AUMF. A Pentagon spokesman explained the rationale for this in July 2013, telling ProPublica that “because elements that might be considered ‘associated forces’ can build credibility by being listed as such by the United States, we have classified the list. We cannot afford to inflate these organizations that rely on violent extremist ideology to strengthen their ranks.” As a result, the U.S. government is in the bizarre situation of considering itself to be at war with a series of organizations while at the same time refusing to tell its own citizens exactly who those enemies are.

The story of the Iraq AUMF is more straightforward. After its passage in October 2002, it served as the legal basis for a disastrous war in which the United States overthrew Saddam Hussein’s regime in early 2003, and then spent nearly nine years attempting to build a new Iraqi state and defend it against insurgents. American military troops completed their withdrawal from Iraq in December 2011. Obama, who had previously touted his early opposition to the war while running for president and campaigned on a promise to end it, declared the war over that same month. However, the Iraq AUMF itself was never actually repealed. And so the 2002 legislation was still in effect when the Islamic State began its march across northern Iraq this summer. As a result, when Washington found itself weighing the use of military force to try to stop this advance, the law was left as an option for the Obama administration to use in order to save it from having to go back to Congress for a new authorization.

THERE HAVE been long-running attempts to repeal or modify both of the AUMFs. In the case of the Iraq War, that effort began in late 2011 as U.S. troops were finishing their drawdown and leaving the country. Then, Senator Rand Paul introduced an amendment to the annual National Defense Authorization Act that would have repealed the Iraq AUMF. The Senate rejected his amendment by a vote of sixty-seven to thirty.

Earlier this year, Paul renewed this effort, introducing a new bill to repeal the law along with Democratic senators Ron Wyden and Kirsten Gillibrand. This time, however, he also had the support of the White House. “The Administration supports the repeal of the Iraq AUMF since it is no longer used for any U.S. Government activities,” said National Security Council spokeswoman Caitlin Hayden. Yet Paul’s bill never received a vote in the Senate. In the House, as the White House was weighing the possibility of conducting air strikes against the Islamic State this June, Representative Barbara Lee (who had previously cast the lone “no” vote against the 2001 AUMF) led a push to ward off this possibility by cutting off all funding in support of the Iraq AUMF—but she too was unsuccessful.

The debate over the 2001 AUMF has been much more sustained. This should not be particularly surprising. Unlike the Iraq AUMF—which, as Hayden said, has not been used as the basis for any military activities since the end of 2011—the 2001 AUMF continues to be used extensively, from Afghanistan to Yemen to Guantánamo Bay. It is thus a natural target for criticism from those who disapprove of many of the actions the United States is taking in the “war on terror.” The New York Times editorial board warned in March 2013 that the authorization was becoming “the basis for a perpetual, ever-expanding war that undermined the traditional constraints on government power.” Accordingly, the board recommended that the law be repealed upon the completion of the withdrawal of U.S. troops from Afghanistan. In the House, Representative Adam Schiff has introduced legislation in each of the last two years that would have done just this. However, both times it has been voted down.

What’s perhaps most interesting is that even many observers who favor waging a continued “war on terror” are unhappy with the current state of the 2001 AUMF. Like the critics, they see that the conflict has evolved significantly over the course of the past thirteen years, and that the enemy that the United States is fighting today is quite different from the one it faced in 2001. The most obvious difference is that while “core” Al Qaeda in Afghanistan and Pakistan has seen its capabilities substantially weakened as a result of America’s military campaign, at the same time numerous other terrorist groups have emerged in other countries. Along with the Islamic State, these include Al Qaeda in the Arabian Peninsula (AQAP), Al Qaeda in the Islamic Maghreb, Al Shabab, Ansar al-Sharia and Al Nusra Front. There are wide variations between all of these groups both in their capabilities and in how connected they are to the original “core” of Al Qaeda. What this means, some say, is that whether or not an organization is an “associated force” of Al Qaeda has ceased to be the best metric in evaluating whether America might need or want to take military action against it. Thus, they argue for rewriting the AUMF to take account of these changes. This might involve specifically listing new groups, or delegating to the executive branch the authority to target certain groups or individuals based on a set of criteria to be determined.