Taliban vs. ISIS: The Islamic State Is Doomed in Afghanistan 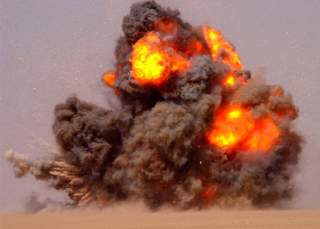 The Islamic State (IS) has grown its fearsome global franchise beyond Iraq and Syria largely by convincing, inciting, or inspiring local, homegrown groups to swear allegiance to the “Caliph” Abu Bakr al-Baghdadi. Various groups in places like Nigeria—Boko Haram—Libya, and Southeast Asia are now affiliates of IS.

The Islamic State in Afghanistan and Pakistan was established on January 26, 2015 when renegade Taliban commanders swore allegiance to al-Baghdadi. This area was constituted as the “Khorasan Province” of the Islamic State. Khorasan is an old Iranian term for much of today’s Afghanistan as well as parts of Pakistan, Iran, and Central Asia. Most Taliban commanders who joined the Islamic State were dissatisfied mid-level commanders who were impressed by the gains and bravado of IS in Iraq and Syria and frustrated with Taliban leader Mullah Mohammed Omar.

Second, the Taliban has managed to blunt the ideological appeal of the Islamic State—a notable accomplishment given the track record of IS propaganda among militant Islamists around the world. Although the Taliban are ideologically affiliated with a hardcore interpretation of Sunni Islam—the Deobandi tradition of South Asia—it is somewhat less extreme than the Wahhabi-Salafist tradition that informs the Islamic State.

The Taliban in both Pakistan and Afghanistan have rejected the “Caliphate” of al-Baghdadi in a sixty page-long publication, backed again by Al Qaeda. Instead, Mullah Omar has been referred to as Emir of the Faithful, a title that is usually associated with the Caliphate. This is in keeping with the approach of Osama Bin Laden, who technically swore allegiance to Mullah Omar.

Third, and perhaps most importantly, the Taliban are deeply rooted in the local tribal culture of the region and are, in many ways, an alliance of related Pashtun tribes (with some Afghan Tajik and Pakistani Punjabi allies) in the Hindu Kush mountains. This makes it hard for the Islamic State, which claims to be universal, to appeal to those fighting for nationalistic reasons. The Taliban see their struggle as being regionally limited and do not seek to fight in places like Syria. In fact, the Taliban recently sent a letter to al-Baghdadi warning the Islamic State to keep out of Afghanistan: “The Islamic Emirate of Afghanistan from a brotherhood point of religion wants your goodness and has no intention of interfering in your affairs. Reciprocally, we hope and expect the same from you.” There have been several clashes between the Taliban and Islamic State over the past few months, with the Taliban usually gaining the upper hand.

Fourth, the Taliban have begun to learn to be largely pragmatic in order to increase their support base, especially among the Shia minority of Afghanistan. Although the Taliban persecuted the Shia during their prior rule of Afghanistan, excepting a few massacres, they did not have genocidal intent, which cannot be said of IS. Ironically, Afghanistan’s Shia, especially the Shia Hazara of central Afghanistan, have actually turned to the Taliban for help against the Islamic State. Another former Shia enemy of the Taliban, Iran, has also begun consultations with the Taliban on fighting IS. It’s worth noting that Iran has been successful in coordinating anti-IS groups.

Fifth, Pakistan, which has consistently supported, if not coordinated and controlled the Afghan Taliban, will never allow their ally to be defeated and replaced by the Islamic State, which is also an enemy of Pakistan. Pakistan has no control or leverage over IS and it would not serve Pakistan’s goals in Afghanistan in any way for the Taliban to be replaced by IS. Pakistan has proven that it has the ability and will to sustain the Taliban, keeping them afloat for nearly two decades now, often against the odds of fighting the United States. It should be no big deal for them to keep the Taliban afloat against the Islamic State.

All in all, then, the Taliban are likely to crush the Islamic State in battles between the two Islamist groups in Afghanistan. Where this leaves the Taliban in its fight against the Afghan government, on the other hand, is still a matter of dispute.