Talking Ourselves into a Cold War with China 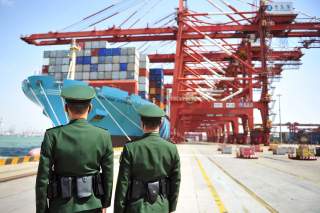 Sometimes the latest turns of phrase in policy circles are just fleeting headlines, soon to be forgotten. As a presidential candidate, Hillary Clinton called for “smart and fair trade.” But she disappeared from the political scene before we figured out what that meant.

However, other times they lead us down the road towards real changes in policy. Soon after the 9/11 attacks, Bush administration officials were accusing Saddam Hussein of being involved. At the time, the invasion of Iraq was hardly inevitable, and may not have seemed likely, but armed with the phrase “weapons of mass destruction,” the administration got the war momentum going, and that is the direction in which the country went.

The U.S.-China relationship is facing similar attempts to define it with very serious sounding terminology, as U.S. policymakers are in the grips of the latest bout of buzzwords and groupthink. The U.S.-China relationship, we are told, may undergo a “conscious uncoupling.” The two countries could be moving towards an “economic cold war.” Actual war is unlikely (although you never know), but nevertheless a seismic geopolitical shift is supposedly upon us.

But what does all this really mean? Are these just transitory phrases that will be superseded quickly by the next big policy thing? Or is this view of the U.S.-China relationship becoming entrenched across the Washington establishment, with the course of history already set?

Let’s hope it is the former. Because if the rhetoric becomes reality, then today’s trade skirmishes will seem inconsequential compared to the economic disruption that would result.

On the American side, a contributing factor may be the wistfulness for the simplicity of past conflicts such as the real Cold War. Us versus them and good versus evil are simple and easy to comprehend. In the United States, there has been a continued search by some people for a powerful rival with whom we can compete for superiority and control of the world. “Radical Islam” briefly looked like it might fill this role, but it turned out to be a marginal threat. The idea of radical Islamists taking over the world was just not credible.

But China’s economic rise came along and gave people a new rival to elevate to the status of “existential threat.” China’s economy and military are large enough, and have advanced quickly enough, to constitute a source of worry about America’s standing in the world for those determined to worry about it.

Of course, China’s many flaws are real. Its political system is authoritarian and oppressive. And there are real areas of conflict with China, including over the South China Sea, human rights, cyber-hacking and spying, as well as economic competition. But the actual degree of conflict has been exaggerated and over-hyped into a “clash of civilizations.” Tyler Cowen recently claimed that “China desires to build an international political and economic order which would destroy liberalism as we know it,” but China experts tend to see the situation differently.

The United States and China can push for that clash if they want to, and there are people on both sides who seem happy to live in that world of conflict. But neither side should want this, and it can be avoided. The two powers do not have to agree on everything, and there will inevitably be some degree of conflict. But it can be managed by sensible policies, attempts at understanding, and good faith efforts on both sides, along with reliance on international institutions.

When thinking about how the United States should deal with China, a little knowledge of history can be helpful. China went through a one-hundred-year period of foreign economic intrusions, which makes it very sensitive to foreign bullying. If the administration’s goal is to open up China’s markets and encourage structural changes to the Chinese economy, unilateral tariffs imposed by the world’s superpower are not likely to work.

Of course, if the Trump administration’s real goal is to impose tariffs, which it may be, then it has already achieved what it has set out to accomplish. Tariffs will certainly push the two economies to “decouple,” and the administration is taking this further by encouraging allies to avoid Chinese products as well. The most extreme version of this approach would be a world with two separate economic spheres, one for the United States and its allies, and one for China and its allies. If we were to reach this state of affairs, then we might find ourselves close to the old U.S.-Soviet Cold War.

The good news is that everything the Trump administration has done in relation to the trade war with China is reversible. We can still change course. The Section 301 tariffs can be removed by the next administration, which is almost certain to have less hawkish and anti-China trade and foreign-policy advisers than this one. There are a few China hawks who will portray this as “weakness,” but in reality it is just a shift from a naïve, failed strategy to one that could actually work. Removing the Section 301 tariffs would not mean letting China off the hook. Rather, in combination with removing the administration’s Section 232 tariffs on steel and aluminum that have aggravated our allies, it would mean taking on China’s bad trade practices in a coordinated effort with other countries. Relying more on multilateral institutions offers the best chance to prompt reform in China.

The talk of an economic cold war is dangerous, and America should get off this road quickly. Although there are those who long for the past glory of American economic dominance, the fact is that we will never repeat the 1950s (and we shouldn’t want to). The future will be made up of a number of wealthy countries, including China, and the U.S. economy is better off as a result of increased incomes in other parts of the world. There will be conflict, but we can manage it peacefully, and aggressive unilateralism combined with over-the-top rhetoric about a new “cold war” will only get in the way.