The Technology Trap: More Than Automation Is Driving Inequality 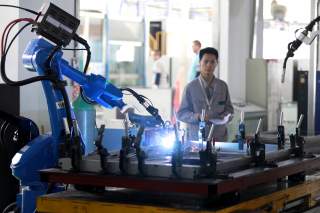 DEMOCRATIC PRESIDENTIAL candidate Andrew Yang has declared, “The automation of our jobs is the central challenge facing us today.” Yang’s message, echoed by another candidate, South Bend mayor Pete Buttigieg, won’t win him the nomination, but it is backed up by several social scientists including Massachusetts Institute of Technology’s (MIT) Erik Brynjolfsson and Andrew McAfee and Oxford researchers Carl Benedikt Frey and Michael A. Osborne. In 2013, Frey and Osborne predicted that in “perhaps a decade or two … 47 percent of total U.S. employment” would be at “high risk” of being automated. That could portend what futurist Martin Ford has called a “jobless future” and would call for drastic measures to prevent a social and political cataclysm.

Now Frey has written a long book, The Technology Trap: Capital, Labor, and Power in the Age of Automation, putting his findings in historical context. Frey argues that automation, or what he calls the third industrial revolution, is not only putting jobs at risk, but is the principal source of growing inequality within the American economy. The failure to meet this challenge, Frey warns, is fueling populist and white identity politics, most evident in the 2016 election of Donald Trump.

FREY’S BOOK is about a third longer than it needs to be. He and his publisher were, perhaps, beguiled by the commercial success of Thomas Piketty’s weighty Capital in the Twenty-First Century. Frey’s book is highly repetitious. And before getting to the heart of the argument, which is the difference between the first, second and third industrial revolutions, you have to wade through chapters about Neolithic and preindustrial technology. But the heart of the argument is interesting and worth pondering.

According to Frey, the West has experienced three industrial revolutions that have been impelled by technology. The first, dating from the late eighteenth century, was driven by the steam engine, the railroad and the cotton gin; the second, which extends through the first six decades of the twentieth century, by electricity and the internal combustion engine; and the third, which begins sometime in the 1960s, and is still going on, by computer technology and, most recently, artificial intelligence. Each of these revolutions has had different effects on employment and equality, depending on the kind of technology that was introduced.

The effect has depended on whether the technology was “enabling” or “replacing”—a distinction that is common among social scientists who write about automation. An enabling technology increases the productivity of existing workers without eliminating their jobs. A good example would be how the typewriter increased the power of a clerk without eliminating the need for clerks, or how computer design increased the productivity of architects without imperiling their jobs. But the ATM replaced and eliminated many bank tellers. Robots, combined with industrial reorganization, have replaced assembly line workers. And so on.

According to Frey, the first industrial revolution was dominated by “replacing” technology. Weavers and other artisans were replaced by simple machines that could often be operated by children. Some of these former artisans became low-wage farm laborers, while others were unemployed. Overall, wages and labor’s share of national income plummeted. Economic historians call this period the “Engels’ Pause”—a reference to Friedrich Engels’ classic The Condition of the Working Class in England in 1844, which documented the immiseration of the peasantry and working class under the new technology. Marx’s socialist politics was rooted in this first industrial revolution: it assumed a rebellious working class facing unremitting downward pressure on wages.

The second industrial revolution, Frey argues, was dominated by enabling technology. The key was the rise of the electricity-powered assembly line, the gasoline-powered engine and the new electric office. Productivity rose rapidly, but wages kept pace, and the gap between the wealthy and everyone else actually shrank. The third revolution has taken place in two stages. In the first, which featured robots, many mid-wage, routine industrial jobs disappeared—among those were the assembly line jobs created in the earlier revolution. In the next phase, based on artificial intelligence, many lower-skilled service jobs will disappear. These would include office and administrative support, sales, food preparation and serving, and transportation. Frey thinks the development of autonomous vehicles will soon have a devastating effect on truck drivers, who are the largest single occupational group in many states.

Factory workers who lost their jobs during the first phase of the third revolution (circa 1970–2010) often had to take lower-paid service sector jobs. The same thing will happen, Frey predicts, with workers who lose their jobs in the phase characterized by artificial intelligence. Frey’s prediction is dire. He writes,

A truck driver in the Midwest is not likely to become a software engineer in Silicon Valley. He might take up work as a janitor. Or he might find work in grounds maintenance, keeping parks, houses, and businesses attractive … If he became a janitor he would trade a $41,340 job (2016 annual median income) for a $24,190 job. If he manages to become a ground maintenance worker, he would make $26,830 per year. Or he might get a job as a social care worker, earning $46,890 per year. But that would require him to get a college degree.

In this way, the third industrial revolution would resemble the first: it would render a mass of workers obsolete and depress overall wages. And, like the first revolution, the third could precipitate a revolt from the bottom—led initially by right-wing populists like Donald Trump or France’s Marine Le Pen. “The robot revolution is largely a Rust Belt phenomenon, and this is also where Trump made the greatest gains for the Republican Party,” Frey observes.

SOME OF Frey’s analysis of the political implications of the third revolution seems overdrawn: he claims that the research he did with two other social scientists demonstrated that if the number of robots had not increased since 2012 in Michigan, Pennsylvania and Wisconsin, Hillary Clinton would have won these states and the 2016 election. Overall, however, Frey’s analysis of the Trump vote in the Midwest is pretty astute. Some liberal commentators have attributed Trump’s votes entirely to white racism and identity politics. Frey locates it instead in a broader problem of identity created by “fading opportunity in the labor market.”

Frey argues that “industrial male workers had to find ways of taking pride in monotonous toil on a factory’s assembly line.” Citing sociologist Michèle Lamont, Frey writes that their solution was to construct an identity as a “disciplined self.” He concludes, “In Rust Belt cities and townships, where joblessness is now widespread, the ‘disciplined self’ identity has become harder to maintain, making dormant grievances come alive.” These include the cultural resentments that liberals have focused on in explaining Trump’s votes. In my own book, The Nationalist Revival, I similarly described the threat to workers’ “way of life” from a decaying industrial base, which carried with it the destruction of neighborhoods, bars, churches, union halls and of the expectation that one’s children could enjoy the same lifetime employment.

Frey’s analysis of working-class discontent also leads him to dismiss the condescending solution favored by some wealthy Democrats for economic inequality. Yang, former Facebook publicist Chris Hughes and other one-percenters have argued for a universal basic income that would provide the equivalent of a supplementary welfare payment—from $500 to $1000 a month, even to those unable or unwilling to find work.

These eupeptic plans run afoul, Frey argues, of the average Americans’ desire to earn a living through work and aversion to those who might not share this legacy of the Protestant Ethic. He quotes his Oxford colleague, Ian Goldin, who contends that “Individuals gain not only income, but meaning, status, skills, networks and friendships through work. Delinking income and work, while rewarding people for staying at home, is what lies behind social decay.” Exactly right.

In a closing section, Frey enumerates his own proposals for dealing with job displacement owing to the third industrial revolution:

Addressing the social costs of automation, will require major reforms in education, providing relocation vouchers to help people move, reducing barriers to switching jobs, getting rid of zoning restrictions that spur social and economic divisions, boosting the incomes of low-income households through tax credits, providing wage insurance for people who lose their jobs to machines, and investing in early childhood education.

While by no means novel, these proposals make perfect sense.

FREY COVERS a lot of ground in his book, and I won’t pretend to match his erudition. But I want to raise a few questions about his historical account of the industrial revolutions and about the overweening role that he assigns to automation in explaining economic equality and inequality.

First, the history of technology and jobs: I don’t think the distinction between replacing and enabling technology fully accounts for the difference between the revolutions and their effect on jobs and economic equality.

Take the difference between the second and third revolutions. Frey acknowledges in passing that, during the second revolution, technology did dramatically replace employment, especially in agriculture. In 1850, according to some estimates, 64 percent of the country’s workers worked on farms; by 1929, due in large part to the introduction of reapers, tractors and other machinery, it was down to 18.3 percent. It is now below 2 percent, even though total production has continued to increase. During the same period, a host of crafts occupations were also replaced by assembly-line production.