Ted Cruz Detonates the Charges on a GOP Set to Split 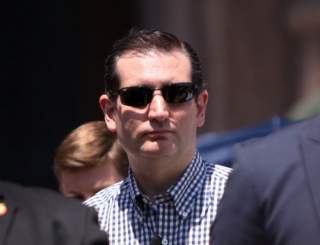 Ted Cruz’s address to the Republican National Convention was an act of betrayal, a cynical résumé enhancer aimed at winning the election in 2020 rather than the immediate matter of dispatching Hillary Clinton. Cruz, once a giant in the conservative firmament, will now be remembered as the American Michael Gove, stabbing his party’s ringmaster in the front only to irreparably bloody his own career. He won’t be forgiven.

Ted Cruz’s address to the Republican National Convention was an injection of guts into an increasingly craven GOP. While the convention’s other speakers slavishly prostrated themselves before the Dear Leader, Cruz was the valiant exception, transcending the cult of personality. And why should he endorse Trump? The man mocked his wife’s appearance and insinuated his father was involved in the Kennedy assassination.

Those two thoughts, and syncretized mixtures of both, have taken up residence in the heads of Republican delegates. That they’re almost diametrically opposed shows how riven the right has become. Even a political convention, a carefully stage-managed event planned solely to project an image of unity, can’t bridge these divisions. Cruz didn’t carve out this chasm—au contraire, he stretched himself over it more nimbly than any other presidential candidate—but last night he set off a string of charges that blew it open even wider. And here we thought Melania Trump might have been set up—the real saboteur had already been given a primetime slot.

It wasn’t just that Cruz didn’t endorse Trump: Ronald Reagan technically didn’t thumbs-up Gerald Ford in 1976 and the show still went on as planned. It was that Cruz’s entire speech was a taunting, jigging, neener-neener to the Republican Party, teasing the audience with repeated feints at an endorsement before scurrying back to the Constitution and love of country. Towards the end, he exhorted viewers to “vote your conscience,” a semantic hole wide enough to drive a Hillary for President bus through. The delegates, realizing what was up, booed and chanted for Trump—and then Cruz pivoted to his father who had escaped communism in Cuba, rendering unseemly any disapproval from the crowd. “I appreciate the enthusiasm of the New York delegation,” he said with a mocking smile, clearly relishing the mayhem.

This was a carefully blueprinted act of subversion, carried out by the Senate’s happiest warrior. The fallout of Cruz’s blast was immediate and radioactive: Utah began chanting “Ted! Ted!” while Arizona responded with “We want Trump!” If Team Trump knew in advance the endorsement wasn’t coming, as has been reported, it shows alarming ineptitude. Fast-forward to today, and the news networks are all ignoring Mike Pence’s (really excellent) speech in favor of hauling out querulous delegates and asking them to stick their fingers into the Trump-Cruz fracture. This is not what you want after night three of your convention.

The biggest problem for the GOP now is that this isn’t just a clash of personalities, or even the dusty old chalk boundary between moderates and conservatives. It’s the jostling of at least three political parties—establishmentarians, tea partiers and Trumpians—trying to fit under one roof, while the battle lines take orthogonal turns through populism and elitism, authoritarianism and libertarianism, in addition to the standard left versus right. The tea party, it turns out, wasn’t some passing fad or nest for the Trump egg: it was one faction in a brewing civil war that exploded into battle again last night.

Agree on a nominee? We don’t even agree on Syria—Rand Paul wants less involvement with the anti-Assad rebels while Tom Cotton hears them crying out for American aid. On trade, the vice presidential nominee Mike Pence supports the Trans-Pacific Partnership while the presidential nominee Donald Trump is adamantly opposed. On immigration, the Wall Street Journal wants more while Breitbart wants less. On Russia, Trump seems determined to stomp on neoconservatives’ feet until they soften their stances towards Vladimir Putin. On upper-bracket tax rates, well, who even knows anymore?

You can cast your convention in broad tones of patriotism and law enforcement, you can rally your delegates against the common Democratic enemy, and you still won’t paper over these cracks. Even a Trump win in November—a distinct possibility, according to the polls—won’t put the conservative Humpty-Dumpty back together again.