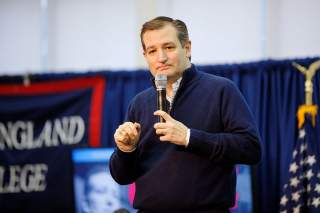 Normally, a debate between the runners-up for the major party presidential nominations wouldn’t be particularly compelling. Who would have wanted to watch Mike Huckabee or Mitt Romney debate Hillary Clinton on health care reform after the 2008 election?

But Ted Cruz and Bernie Sanders represent the activist energy in their respective parties. The Texas Republican is a product of the Tea Party. Sanders, a nominal independent who caucused with the Democrats long before he sought their presidential nomination, is emblematic of a newly energized left.

While the two come from diametrically opposed positions on health care and the role of government, the fact is that Cruz ran against Obamacare from the right and Sanders ran against it from the left. Its patchwork of regulations, mandates and subsidies, accompanied by rising premiums and deductibles, has satisfied neither the single-payer left nor those on the right who would like to see better-functioning markets in health care.

Cruz has historically been the more skilled debater, but the format evened the odds. Town halls invite participants to plead for government intervention (although networks have done a bit better in balancing the attendees in recent years). A constitutional conservative like Cruz will sometimes have to say no; Sanders, a democratic socialist, can always say yes.

That’s not to say everything always went well for Sanders. The Vermont lawmaker was questioned by a woman from Texas who owned five hairdressing salons. She said she could not afford to provide health insurance for all her employees due to her low profit margins.

Sanders conceded he didn’t know anything about the hairdressing business, but that wasn’t going to stop him from making these decisions for her. “I’m sorry, I think that in America today, everybody should have health care,” he replied. “And if you have more than 50 people, you know what, I think I’m afraid to tell you, but I think you will have to provide health insurance.”

Free health care is popular, naturally. But it runs into snags whenever it becomes apparent that it, in fact, costs real people money.

“Millions of businesses are being told by Democrats: tough luck,” Cruz retorted. “It’s one of the most damaging things about Obamacare.”

Cruz faced tough questions too. A woman with multiple sclerosis said she moved from a state that did not expand Medicaid under Obamacare to one that did, and immediately began receiving the treatments she needed. Would this still be true if Republicans repealed the law?

The Texas senator responded by pointing to Medicaid’s flaws. The program does not reimburse doctors very well, so many do not take Medicaid patients. Wait times can be long, and are in some cases rising. There are persistent questions about whether beneficiaries are in general receiving better care than the uninsured.

But this woman was benefiting from Medicaid, and said Cruz did not really answer her question.

Sanders needled Cruz on his promise to ensure continuous coverage for people insured through Obamacare even after repeal.

“Ted, I cannot believe what you just said,” Sanders said at one point. “It is a direct contradiction of what you ran for president on. What Ted has said is he wants to get rid of all federal mandates.” Cruz denied the charge, saying he wants people to pick and choose the coverage that they need, rather than having to buy plans with mandated benefits they may not want.

The debate highlighted the challenges faced by Republicans as they move from repeal to replace. Democrats have been defending Medicare and Medicaid for years, arguing the government can help more people. Republicans have never made the case for their vision of health care in any sustained way, other than to oppose Democratic proposals (like Obamacare or the 1990s Clinton plan) or imitate them (Medicare Part D under George W. Bush).

Cruz may be the better debater, but Sanders had the easier case to make. The Texan nevertheless acquitted himself well.

I’d like to think I would have been able to say the same if there had been a Cruz versus Sanders presidential contest. Given that Donald Trump won in places like Pennsylvania and Michigan by running away from limited government, and that Sanders might have appealed to some Rust Belt voters better than Clinton, I am not so sure.