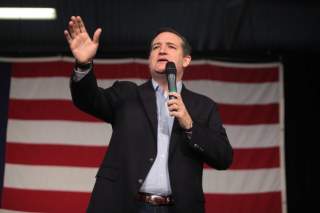 Senator Ted Cruz isn’t one to curtail his policy positions. From his pugnacious loathing of amnesty for illegal immigrants to his demand that we pave over the tax code, the Texas senator likes to take the most maximalist and aggressive stance available, pragmatism be damned.

Interviewed by Bloomberg’s Sahil Kapur earlier this week, Cruz dressed down fellow presidential candidate Marco Rubio for supporting President Obama’s 2011 intervention in Libya, saying the deposal of Muammar Qaddafi “made no sense” and blaming it for the subsequent terrorist attack on an American compound in Benghazi. He also trashed Rubio for wanting to arm rebels to fight Bashar al-Assad. “If the Obama administration and the Washington neo-cons succeed in toppling Assad, Syria will be handed over to radical Islamic terrorists,” he said.

Washington neocons recoiled. Max Boot of Commentary magazine was deployed to sniff at Cruz’s “weak grasp of foreign policy.” But Cruz’s relative moderation on issues of war and peace is nothing new. He’s long sought a third way between Rubio and the more dovish Rand Paul, criticizing the wars of the Obama era and endorsing some surveillance reform, while drenching his rhetoric with the usual stuff about how the president “leads from behind.” It’s a neat trick: mount a challenge to Republican hawkishness by couching it in a critique of Democratic policies.

The trouble comes when Cruz gets specific. So he rejects both recklessness and weakness in Syria—what would he do about that nation’s byzantine civil war? In a CNN op-ed from October, Cruz laid out his plan: launch more airstrikes, arm the Kurds, and extend a hand to “our regional allies—Israel, Egypt and Jordan—who are on the front lines of this fight.”

The first might stymie the jihadists, but it won’t defeat them. The second is already being done by President Obama, and is complicated by the presence of the Kurdish YPG and its alleged atrocities against Arabs and Turkmen. As for the third, our allies in the Middle East are more concerned with bombing the Houthis in Yemen and blocking Iranian influence than wiping out the Islamic State in Syria.

Too often, Cruz’s supposedly novel foreign policy involves the usual facile solutions, which always appear more complex under scrutiny. His “third way” is also partially a misnomer. Senator Rand Paul is no “non-interventionist” to Rubio’s neoconservative, as is often assumed. Paul has identified his own foreign policy as a realist midpoint between neoconservatism and the isolationism of the old right. That would make Cruz a fourth way, mediating Paul’s positions while Paul mediates someone else’s positions, a quadration of Paul’s triangulation.

This has created some confusion over where Cruz fits in. For example, Cruz’s prescriptions to fight ISIS aren’t all that different from the ostensibly more hawkish Carly Fiorina, who also imagines a vast Arab coalition reading and waiting. And how can anyone who counts John Bolton and James Woolsey among his advisors claim to disown “Washington neocons”?

There are plenty of questions Cruz needs to answer. But in the meantime, he’s to be commended for trying to tease out an alternative. The GOP for years has operated by default on the Bush Doctrine and the party’s establishment remains obstinately hawkish. For an ambitious Republican candidate to diverge from neoconservatism is no small matter.

Of all the presidential wannabes on the debate stage, none is more plugged into the talk-radio zeitgeist than Cruz. One could surmise, then, that he’s merely saying what he thinks conservatives want to hear on foreign policy. But even if that’s true, it means popular conservatism has markedly changed from where it was during the Bush administration. There’s been a lot of Eeyorishness from right-leaning realists about how neoconservatives still hold the GOP in a trance. Ted Cruz, whether leading or following the grassroots, suggests that analysis is a bit too fatalistic yet.

And it’s not just Cruz. Of the four presidential candidates who most closely align with a hawkish foreign policy—Jeb Bush, Marco Rubio, Carly Fiorina and Chris Christie—only Rubio measures above 6 percent in the polls. And of the candidates who have graduated into double digits—Donald Trump, Ben Carson, Marco Rubio, and Ted Cruz—only Rubio aligns with a hawkish foreign policy. Trump is a nationalist and incipient Russophile who thinks Saddam Hussein and Muammar Qaddafi should still be in power. Carson is incoherent. Cruz has his fourth way.

So don’t dismiss Cruz as searching for a fool’s golden mean. He might need to do some clarifying, he might even change his positions later, but for now he’s emblematic of a GOP that’s imperfectly but necessarily having a dialogue with itself about foreign policy.