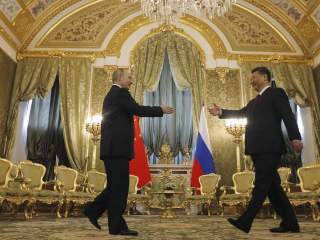 Having watched Sino-Russian relations deepen over the past decade, the West has begun to address the security implications. On both sides of the Atlantic, a debate is brewing over how to respond. Some argue that the West must avert a threatening alliance by coaxing Russia back. They call for a more conciliatory policy that challenges the strong consensus adopted after Russia’s annexation of Crimea.

Such views are superficially appealing. Unfortunately, they are based on poor evidence, flawed logic and a misreading of history. They suffer from a vice called “triangulism.” When triangulists see three major powers, they feel compelled to join them up like dots, decide who sits at the happy apex, and draw policy conclusions. The clearest triangulist manifesto was recently laid out by the New York Times editorial board. It argued that Russian president Vladimir Putin’s relationship with Chinese president Xi Jinping presented a grave threat that the United States must counter by improving its relations with Russia. Its very first lines invoke the great Ur-triangle of détente, the Nixon-Kissinger diplomatic breakthrough with Beijing that pressured the Soviet Union into an era of cooperation. The editorial warns that Putin “could pull a ‘reverse Nixon’ and play his own version of the ‘China card.’” In this reading of events, Russia and America have swapped places. America once sided with China, inducing the Soviet Union to cooperate. Today, Russia is siding with China, and America should respond as the Soviet Union did—by softening its policies. This is the logic of triangulism.

But the analogy is false. The relative strength of the three powers, and the nature of their relations are very different today. In the early 1970s, America was far more powerful than distant China. Despite long-standing ideological hostility, China presented no real threat, nor did rivalry over specific issues significantly complicate a pragmatic Sino-U.S. partnership. But what was true of America then is not true of Russia today. China is not a weaker, distant partner of Russia. It is a powerful neighbor that is becoming steadily stronger. China’s growing influence in Central Asia and dominance of trade in much of the former Soviet Union is an early development unwelcome to Moscow. It will not be the last.

Triangulism accepts at face value the effusive warmth of frequent Putin-Xi meetings. It cites Putin’s State of the Nation talk of aligning the Eurasian Economic Union and the Belt and Road Initiative as if this were an accomplished fact rather than a deeply ambiguous formula. It notes Putin’s gratitude to Xi for the 30 percent growth in trade last year, while ignoring that this was driven largely by a 32 percent rise in the oil price. It overlooks the many cases where China has played a hard economic game or expressed its disappointment with Russia.

Furthermore, antipathy dominated China’s relationship with the Soviet Union on the eve of détente. The two countries had even fought a border conflict in 1969. Few common interests bound them or hindered China from cooperating with America. But again, what was true of the Soviet Union then is not true of America today. Despite the recent decline of the Sino-U.S. relationship, the economies of the two countries remain deeply interdependent. China’s relationship with America is far more significant to it than its relationship with Russia. China has not only recognized Russia’s annexation of Crimea, but it has censored Putin’s 2018 call in Beijing for Chinese tourists to visit the occupied peninsula. U.S. sanctions on Russia have deterred China from engaging more deeply with Russia rather than encouraging it to do so. Russian and American positions today, then, are not mirror images of what they were five decades ago. Russia has not taken America’s position at the apex of a triangle. Putin could not be a Nixon even if he wished to be.

A flawed analogy yields flawed advice. The New York Times calls for the United States to “establish a sounder relationship with Russia and peel it away from China.” It even praises Trump for attempting to do so. Yet America’s Russia policy—albeit stiffened by Congress—is now more robust than when Trump took office. The editorial board’s view implies that he should resist stronger sanctions and related measures against Russia. This contradicts its own grave concerns, which were laid out in another editorial board piece just a few days later. These concerns center around the failure to adequately address continuing Russian electoral interference.

How could America “peel away” Russia anyway? By cooperation, we are told, in space exploration, the Arctic and arms control. But it is left unclear why Russia might wish to cooperate in these areas and why this would cause it to abandon its relationship with China. A key lesson of 1970s détente—and a major cause of its decline—was Soviet refusal to allow cooperation in areas of its weakness to constrain its pursuit of an advantage in areas of its strength. Even the sensible call for renewed arms control ignores the extent to which this issue is no longer a U.S.-Russian matter alone. In particular, the most urgent issue, the future of the Intermediate-Range Nuclear Forces Treaty, is now tangled up by Chinese interests and the Asian theatre.

Triangulism is not just misguided but potentially dangerous. It portrays America as demandeur, the weaker party that can tolerate the status quo less, and needs to adjust its position more, than other major powers. It encourages America to make concessions that are likely to be pocketed rather than reciprocated. And it emboldens Russia to believe it is the privileged party in the relationship. None of this is true. Triangulists think themselves far-sighted, but are in fact looking back, and squinting badly, at the very different world of the 1970s.

Triangulism is stirring In Europe too. After hosting the G7 summit last month, French president Emmanuel Macron declared that “pushing Russia away from Europe is a profound strategic error.” He called for a new relationship, arguing that “we cannot rebuild Europe without rebuilding a connection with Russia, otherwise Russia will move closer to other powers.”

But Gallic triangulism adds a curious twist. It declares itself a strategy of self-interest and generosity. A weak Russia, Macron argued, needs Europe to protect it. “Russia’s GDP is equivalent to that of Spain, and it has a declining population. Do you think anyone can last that way? We need to offer a strategic option to this country, which it will inevitably need.” In other words, Europe should reconcile with Russia because Russia threatens an alliance with China and because Russia itself needs an alternative to such an alliance. It is hard to see the logic in this contradiction.

What is the cure for triangulism? First, understand the power and interests of other states, not just your state. Second, think in terms of underlying goals rather than seductive analogies. Alignments and clashes of interests, not geometric shapes, are the forces that drive relationships. Third, recognize that “cooperation” is never an end in itself, but a policy to be pursued if it serves clearly-defined national interests.

To be sure, the Sino-Russian relationship is now stronger than at any time since the 1950s. But closer ties were inevitable regardless of Western policy. Indeed, what is remarkable is how long it took the world’s biggest energy exporter and importer, ruled by anti-Western autocrats and sharing the world’s longest border, to improve their relations. A correction was overdue. The West should overstate neither its influence on the relationship nor the threat this poses.

Few people dispute that Sino-Russian cooperation is an unwelcome development for the West. In some areas, such as cyber- and intelligence-sharing, it presents a genuine and growing concern. But the West has better options than a more obliging posture towards a country that has challenged Western interests and violated key norms of international order repeatedly and on a range of issues. These challenges have been targeted toward state sovereignty, territorial integrity and the non-use of chemical weapons. Triangulism may be gaining currency, including in the U.S. government. But it is not warranted by logic, evidence or principle. It is time to be rid of this intellectual vice.

Dr. Nigel Gould-Davies is an associate fellow of Chatham House. He is a former British diplomat and served as Ambassador to Belarus. He is the author of Tectonic Politics: Global Political Risk in an Age of Transformation (Brookings, 2019).