Tensions Are Flaring between Washington and Moscow 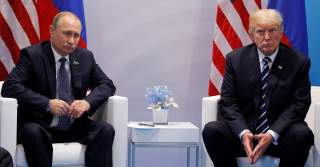 President Donald Trump is taunting Russia as he makes clear that he has decided to strike the forces of Syrian dictator Bashar al-Assad in retaliation for an alleged chemical weapons attack in the town of Douma. At the same time, and somewhat paradoxically, Trump is also offering cooperation to Russia on a range of issues including arms control. Meanwhile, Moscow is reiterating once more that its forces will retaliate forcefully if Russian citizens are harmed as a result of an American attack.

“Russia vows to shoot down any and all missiles fired at Syria,” Trump tweeted on April 11. “Get ready Russia, because they will be coming, nice and new and ‘smart!’ You shouldn’t be partners with a Gas Killing Animal who kills his people and enjoys it!”

Method Behind the Madness

What should we make of Trump’s belligerent tweet? “I think Trump's tweets are a signal to [Russian President Vladimir] Putin to consider sending his people to shelter,” Jerry Hendrix, a senior fellow and the director of the Defense Strategies and Assessments Program at the Center for a New American Security told the National Interest. “It’s a 'You better think real seriously about your next move son' moment."

The problem comes, of course, if Russia fails to heed the warning. Indeed, Moscow is reiterating its warning that if Russian forces or civilians are killed in an American attack, the Kremlin will respond. “If there is a strike by the Americans, then...the missiles will be downed and even the sources from which the missiles were fired,” Amb. Alexander Zasypkin told Hezbollah’s al-Manar TV, speaking in Arabic according to Reuters.

Zasypkin’s statement reinforces a recent declaration by the Chief of the General Staff Gen. Valery Gerasimov. “If lives of the Russian officers are threatened, the Armed Forces of the Russian Federation will retaliate against missile and launch systems,” Gerasimov said on March 13.

Gerasimov, as both American and Russian-based experts have noted, is not prone to bluffing and strictly follows directives from Putin. “When the Russian chief of the general staff says something, you have to listen because someone told him to say it,” Center for Naval Analyses’ senior research scientist Michael Kofman said recently at the Center for the National Interest.

Has a Decision Really Been Made?

Defense Secretary James Mattis said  that the investigation as to who is responsible for the Douma chemical attack remains open, but added that the military will have options ready for the president when the time comes. “We're still assessing the intelligence ourselves, and our allies. We're still working on this,” Mattis said. “We stand ready to provide military options if they're appropriate, as the President determines.”

America’s Forces in the Region

Trump, for his part, seems to have made his determination. However, the fact that Mattis seemed to be unaware of the president’s tweets suggests that an attack may not be imminent in the next twelve hours. An attack is most likely coming in the next several days.

Trump did not add any other details to the tweet, but presumably the president is referring to advanced cruise missiles such as the U.S. Navy’s Tomahawk Block IV long-range cruise missile and the AGM-158B Joint Air-to-Surface Standoff Missile-Extended Range (JASSM-ER). Indeed, there are U.S. Navy warships, including the Arleigh Burke–class USS Donald Cook (DDG-75), USS Laboon (DDG-58) and the Ohio-class guided missile submarine USS Georgia (SSGN-729) that can fire long-range cruise missiles. Georgia, for example, is armed with some 155 Tomahawks. It is likely that any strike on Syria will be launched first from the Georgia.

The French and the British may join in the fray. The British apparently have more or less made a decision to attack Syria—and according sources who spoke to the BBC—even without a vote to authorize the strike in Parliament. France, meanwhile, is ready to make a decision to strike Syria in the coming days.

French president Emmanuel Macron said that his country would make the decision to strike Syria in coordination with Britain and the United States in days. “The third element is the red lines defined by France. These red lines, which are shared by other powers, have nothing to do with the discussions taking place at the U.N. Security Council,” Macron said alongside Saudi Crown Prince Mohammed bin Salman, according to Reuters. “In this context, we will continue exchanges of technical and strategic information with our partners in particular Britain and America, and in the coming days we will announce our decision.”

The French frigate Aquitaine, which is armed with sixteen 300-nautical-mile-range SCALP EG land-attack cruise missiles is in the vicinity of Syria. Meanwhile, the French Armée de l'Air (French Air Force) can strike at Syria from bases in France itself. However, without the United States to beat down the Syrian air defenses, France would place its forces in grave danger. The French are adamant that they will only strike at Syrian forces and strictly avoid hitting Russian military targets.

The Kremlin, for its part, says that it will not participate in “Twitter diplomacy” and will approach the problem through proper channels. "We are not participating in ‘Twitter-diplomacy,’" Russian presidential spokesman Dmitry Peskov told the state-run TASS news agency in Moscow. "We are supporting serious approaches. We still firmly believe that it is important to abstain from taking steps, which may be detrimental to the already fragile situation (in Syria)."

Peskov reiterated the Russian position that the alleged chemical attack in Douma was a sham being used a “pretext” to launch an intervention in Syria. “We remain certain that the claims chemical weapons have been allegedly used in (Syria’s) Douma are far-fetched and cannot excuse any use of force," Peskov said.

Meanwhile, Russian foreign ministry spokeswoman Maria Zakharova suggested that the United States aim its cruise missiles towards “terrorists” rather than the Syrian government. “Smart missiles must fly towards terrorists, not a legitimate government that has been fighting international terrorism in its territory for several years,” Zakharova wrote on her Facebook page in Russian.

Zakharova also suggested that an American missile strike would serve only destroy evidence at the scene of the Douma attack. “Yeah, by the way, the OPCW [Organisation for the Prohibition of Chemical Weapons] inspectors warned that smart missiles would destroy all evidence of the use of chemical on Earth?” Zakharova wrote. “Or is the whole idea to quickly cover up the provocations of smart missiles, and the international inspectors have nothing to look for as evidence?”

“Our relationship with Russia is worse now than it has ever been, and that includes the Cold War,” Trump tweeted. “There is no reason for this. Russia needs us to help with their economy, something that would be very easy to do, and we need all nations to work together. Stop the arms race?”

Trump blamed Democrats and special counsel Robert Mueller for the current tensions with Russia. He also denied that his presidential campaign colluded with Russia. “Much of the bad blood with Russia is caused by the Fake & Corrupt Russia Investigation, headed up by the all Democrat loyalists, or people that worked for Obama,” Trump tweeted. “Mueller is most conflicted of all (except Rosenstein who signed FISA & Comey letter). No Collusion, so they go crazy!”

Zakharova, however, seemed unimpressed. Commenting on the Trump’s suggestion about ending the arms race, Zakharova sarcastically suggested that the president should start by disposing of the U.S. chemical-weapons arsenal, which Washington has been dragging its feet on to dispose of despite treaty obligations. “Great idea!” Zakharova said. “There's an offer to start with the destruction of chemical weapons. American.”