Tensions Are Rising with Iran, Yet No One Wants War 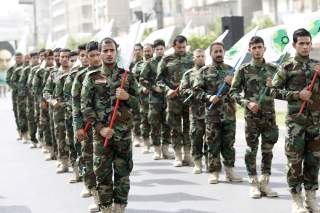 As Washington ramped up threats to retaliated against Iran for any attacks on U.S. forces this month, Tehran scrambled to respond. Islamic Revolutionary Guard Corps (IRGC) chief Hossein Salami twice assured the country that his forces were prepared for a confrontation with Washington. His comments were directed internally for Farsi media and likely reveal that Iran was initially on the back foot in confronting the United States both at home and abroad. Tehran and its allies and proxies don’t want an unpredictable new conflict with the United States.

Over the years Iran has generally enjoyed the feeling that it can strike at a time of its choosing against the United States and U.S. allies. This has included such incidents as harassing and briefly capturing U.S. sailors in 2016, firing a salvo of rockets at Israel last May from Syria, or arming Houthi rebels with ballistic missiles to strike at Saudi Arabia. Iran has continued these activities throughout the Middle East, harassing a U.S. military patrol in Nineveh near Mosul in February, according to a Defense Department report published in March. It also has transferred missiles and technology to Hezbollah in Lebanon, a transit Israel has sought to interdict with more than one thousand strikes on targets in Syria. Iran has also been accused of being behind the escalation between Israel and Hamas in Gaza this May and last October.

Iran’s role in the region makes it appear to be growing in strength, benefiting from the vacuum left behind by the defeat of Islamic State in Iraq and Syria and from exploiting divisions in Lebanon, Yemen and elsewhere. Iran’s role in the region generally feeds off the weakness of regional Arab states, allying with local mostly Shia groups such as Hezbollah in Lebanon or the Badr Organization in Iraq, or with Bashar al-Assad’s regime in Syria and the Houthis in Yemen. It created a web of allies in this way, many of them backed by the Islamic Revolutionary Guard Corps. This complex alliance system is mutually beneficial, with groups in Iraq sending fighters to help Iranian allies in Syria or with the Houthis condemning Israel and Hezbollah giving rhetorical support for the Houthis.

For critics of Iran, it makes Tehran seem all powerful and on the march to a form of regional hegemony. This might involve Iran’s “road to the sea” via Iraq and Syria, or recent evidence that Iran is basing missiles in Iraq. It is also revealed through Iran’s diplomacy with Russia and Turkey, to the extent that Ankara opposes U.S. sanctions on Iran.

By taking on so many responsibilities, Iran has also left itself vulnerable. This was revealed in the first two weeks of May as the United States suddenly escalated tensions with Tehran and threatened that any attacks by Iran or its allies would be met with a U.S. response. Secretary of State Mike Pompeo said on May 9 that “Tehran should understand that any attacks by them or their proxies of any identity against U.S. interests or citizens will be answered with a swift and decisive U.S. response.” His comments were echoed by National Security Advisor John Bolton, Republican Sen. Marco Rubio and special representative for Iran Brian Hook. Rubio even specifically warned two Iranian-backed Iraqi militias. The United States has also recently designated the IRGC and the Iraqi Harakat Hezbollah al-Nujaba militia as terrorist groups.

The usual Iranian response would be bluster and the potential harassment of U.S. forces. Iran has many areas in the region to apply that pressure. But it refrained from doing so during the first ten days of the recent crises, May 5–15. The United States has hinted that Iran was behind the sabotage of four ships in the Gulf of Oman off Fujairah in the United Arab Emirates, but has not provided any evidence. Saudi Arabia also blamed Iran for being behind Houthi drones that attacked oil facilities. On May 19 a rocket landed near the U.S. embassy in Baghdad. Even though pro-Iranian paramilitaries denied responsibility, they are among the likely culprits.

In general, Iran’s response to U.S. threats was initially quiet and circumspect. Iranian Foreign Minister Javad Zarif was on a tour of Asian countries (Japan, India, China and Turkmenistan) seeking to shore up support for the JCPOA (Iran Deal). Iran has also threatened to withdraw from parts of the deal if Europe doesn’t do more to please Tehran. Meanwhile, the head of the IRGC, Hossein Salami, spoke to a closed session of parliament to guarantee that the IRGC was ready to defend Iran. However he also indicated the United States was engaged in a “psychological” war and that U.S. forces currently in the Gulf were not enough for a major war. Nevertheless, by Wednesday May 15 Iran said it was prepared for a full confrontation. But Iran’s Press TV has sought to downplay war rumors with almost-daily headlines about how  President Donald Trump doesn’t want war. Where are the usual headlines about Iran’s advanced ballistic missiles, its “swarm” boats and its great achievements in influence in Syria and Iraq?

Iran’s influence is also its soft underbelly. What makes it strong also presents opportunities for its adversaries, in this case the United States. For instance, the United States has said that any attack by Iranian proxies will be met with a response against Iran. That puts the one hundred thousand members of the Popular Mobilization Forces or paramilitary Shia militias in Iraq on notice. It also puts on notice Hezbollah and Iran's IRGC bases in Syria. One attack by a wayward Iranian-backed groups could lead to retaliation against the IRGC or Tehran. For instance, in February 2018 pro-Syrian regime militias and alleged Russian mercenaries attacked the U.S.-backed Syrian Democratic Forces near Deir Ezzor. In September 2018 rockets were fired at the U.S. consulate in Basra and the facility was closed. In addition, Iranian-backed militias have harassed the U.S. base at Tanf in Syria near the Jordanian border. Since the United States warned Iran about its actions in early May these kinds of activities ceased.

Iran likely never expected to be held accountable for the actions of all its allies and militia groups. It sought to create a Hezbollah-style model in numerous countries for precisely this reason, assuming that opaque structures and party-militia groups are harder to dismantle and can more deeply influence countries than Iranian hard power can. Iran had plausible deniability, whether after the 1983 Marine barracks bombing in Lebanon or rockets fired more recently by Iranian-aligned Islamic Jihad in Gaza, or even assassinations in Europe.

The United States has long been aware of Iran’s involvement with militias in places like Iraq and also the role groups like Kata’ib Hezbollah, Asaib Ahl al-Haq or Badr played in opposing U.S. forces there. Previous administrations did not think to hold Tehran responsible for the work of its proxies. The Trump administration has seized on this as a way to pressure Iran. It comes after Washington left the Iran Deal, applied sanctions, and also sanctioned the IRGC and one Iranian-linked Iraqi militia.

Momentarily in mid-May, Iran was confounded by Washington’s sudden upping of the rhetoric. Tehran understands that it is involved in a complex series of small conflicts that span the entire Middle East. The large number of these conflicts and long frontlines should be looked at on a regional level. From Hezbollah on the coast of Lebanon to Deir Ezzor where U.S. forces are across the river from Iranian-backed units, to Iraq where U.S. forces have been harassed on patrol, to the Persian Gulf where U.S. allies oppose Iran’s actions, to Yemen, there is a huge circle of different conflicts. Some of these are actual hot conflicts, such as Yemen, but many are more cold struggles, such as Israel’s attempts to prevent Hezbollah from receiving arms shipments. In other cases they involve brinkmanship, such as in Iraq. For instance Iran has sought to gain influence in the Kurdistan region of northern Iraq, once a close U.S. partner, while the United States sent acting Assistant Secretary of State for Near Eastern Affairs David Satterfield to Erbil on May 8 to meet with members of the Kurdistan Regional Government. Iranian media highlighted the visit, noting that Washington was seeking to pressure Erbil to reduce relations with Iran.

Washington faces a hurdle in keeping up the pressure on Tehran and keeping Iran guessing about the White House’s intentions. There is active pushback domestically against a conflict with Iran. This involves members of former administrations, editorials in the media and also supporters of the Iran Deal. There is also skepticism among some U.S. allies. The United States is also wary of more large-scale conflicts. Iran knows this and has historically used these discussions to its advantage, playing up notions of “hardliners” and potential Iranian reactions.

The most innovative aspect of the current U.S. pressure on Iran has been the notion that Iran will be held responsible for the act of its proxies. This made Iran vulnerable in all the places that it felt were evidence of its growing strength in the region. It must now be cautious about that strategy. As much as Tehran has said that the United States doesn’t want a major war, there is no evidence Iran wants a major conflict either. The regime in Tehran has more to lose in a real war with the United States. It relies on its ability to delicately balance proxies and allies across the region by not being fully challenged and allowing each ally or proxy to fight its own local conflicts, sometimes using them to pressure Iran’s adversaries, such as Saudi Arabia or Israel. By looking at Iran's actions regionally and threatening to respond regionally the United States advanced a new policy that confounded Tehran.