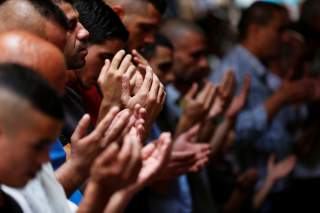 It’s happened again. In a fresh terror attack at least forty-nine people were gunned down in Christchurch, New Zealand, on Friday—a white supremacist terrorist attack streamed on social media. Two mosques, during Friday prayers. One assailant, in custody, said the dastardly acts were a “revenge on invaders.” Three others are being held.

“My warmest sympathy and best wishes goes out to the people of New Zealand after the horrible massacre in the Mosques,” President Donald J. Trump wrote on Twitter Friday morning. “49 innocent people have so senselessly died, with so many more seriously injured. The U.S. stands by New Zealand for anything we can do. God bless all!”

Said Secretary of State Mike Pompeo: “I want to offer my personal condolences to the nation of New Zealand, in the wake of the grotesque, mosque attacks in Christchurch. … The United States condemns this hateful assault.”

The fallout from the attack featured all the astringent elements that have become hallmarks of such modern acts of nihilistic violence: a discussion of the negative externalities of a globalized world, a left-wing quick to blame firearm proliferation, a right-wing eager to highlight spiritual disrepair, and social media behemoths seeking but struggling to contain internet hysteria.

Links were swiftly drawn between Friday’s bloodshed and a 2011 murder spree that killed seventy-seven, by the ethno-souverainiste Anders Breivik. Magnus Ranstorp of the Swedish National Defense College told the Associated Press that the manifesto published by the New Zealand assailant, Brenton Tarrant, is shorter and “more sloppy” than the Breivik publication—popular on the dark recesses of the internet; claims proliferated Friday that Tarrant was in contact with Breivik devotees. According to the Washington Post, “A manifesto allegedly written by a man charged with murder in connection with mosque attacks in Christchurch, New Zealand, that left 49 people dead and scores injured claimed inspiration from Norwegian mass murderer Anders Behring Breivik and suggested that the pair had been in ‘brief contact.’”

And Silicon Valley firms said they were doing their best to clamp down on the dissemination of the grisly video streamed by the killer himself. “New Zealand Police alerted us to a video on Facebook shortly after the livestream commenced and we quickly removed both the shooter's Facebook and Instagram accounts and the video,” Facebook's Mia Garlick noted in a statement.

The bloodshed will be an early test for Jacinda Ardern, the prime minister, who at thirty-eight is among the youngest heads of government in the world. She rightly called Friday one of New Zealand’s “darkest days.”