Is Terrorism Transforming America Into a Police State? 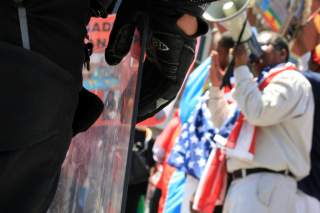 For at least three decades, experts have noted the growing militarization of America’s police forces. The proliferation of Special Weapons and Tactics forces, or SWAT forces, is the most obvious example of that trend. Originally, such units were designed to deal with exceptionally dangerous situations (such as mass hostage incidents) in which lightly armed police would be outgunned. Not surprisingly, the first SWAT contingents originated in America’s largest and most dangerous cities.

That situation has changed dramatically. Small cities and even some modest-sized towns now have such heavily armed units utilizing military hardware and traveling in armored vehicles. They look—and act—far more like military combat units than anyone’s traditional conception of police. And the missions of SWAT forces have greatly expanded since their original formation. Increasingly, local authorities use them in routine matters that involve little or no danger of major violence from the targets of police action.

A recent incident in Hutto, Texas, a sleepy, outlying suburb of Austin, illustrates just how dangerously promiscuous the utilization of SWAT teams has become. On June 26, local police conducted a raid to implement a search warrant on a house in a low-crime, middle-class neighborhood. The alleged crime? Police suspected that some residents of the target house were involved in gambling. Investigators were backed up by a SWAT unit with nearly a dozen officers in full combat regalia pouring out of an armored vehicle.

Needless to say, the neighbors were both stunned and alarmed to see such an operation take place in their quiet community. One mother stated: “I went to my daughter’s room and looked outside their window to see if I could get a better view of what was going on, and there was a man in fatigues with a sniper rifle laying in my neighbor’s driveway.”

What was even more striking is that the police spokesman admitted to a reporter that the authorities “had no reason to believe” that the residence undergoing the search was involved in any violent activity. In other words, police were using paramilitary tactics and forces to execute a search warrant involving a nonviolent (indeed, victimless, crime) in a low-crime neighborhood. Such arrogant bullying should alarm anyone who cherishes domestic civil liberties.

Unfortunately, such incidents have become all-too-common as local authorities seek new missions to justify the existence of SWAT teams and to keep the personnel alert and well trained. The expansion of SWAT units and missions is closely correlated to the existence of federal programs making surplus military hardware available at little or no cost to local police forces.

Such deadly toys have become a prime justification for law enforcement budget increases and the receipt of federal grants in communities around the country.

The war on illegal drugs has been the primary justification that authorities use to create and expand SWAT units, and antidrug raids are their primary mission. The drug-war rationale has some plausibility, since narcotics traffickers are sometimes extremely violent criminals. As concerns about terrorism became more salient, especially after the 9/11 attacks, that mission augmented the drug-war justification. Politicians, even in small communities with virtually a nonexistent possibility of being a terrorism target, highlight the alleged danger (along with the menace of illegal drugs) to pump-up police budgets and gain the military hardware from Washington.

Thus far, efforts to rescind or even curtail the federal program have proven unsuccessful. The militarization of America’s local police proceeds unabated. That is an alarming development. General Colin Powell, at the time chairman of the Joint Chiefs of Staff, observed that the military’s purpose is to “kill people and break things.” Military forces operate in enemy territory and tend to view all people there as potential adversaries who could prove deadly to them.

The purpose of America’s police forces is (or at least should be) totally different. Their legitimate role is to protect the life, liberty and property of people living in a free, constitutional republic. It is extremely unwise to confuse or conflate that role with the function of the U.S. military. Yet, that is what is occurring at an alarming rate.

The Posse Comitatus Act, which Congress passed in 1878, severely restricts the role of the military in domestic law enforcement. Unfortunately, that restriction has experienced significant erosion in recent decades, with some prominent political figures deriding the statute as “archaic.”

Even if the language of the act remains more or less intact, it will have little relevance if the proliferation of SWAT units continues. SWAT personnel are combat soldiers in everything but name. It matters little if they are technically police operating as part of a local government if their weapons and tactics are those of an occupying army. The old adage that if it looks like a duck, walks like a duck and quacks like a duck, it’s a duck, applies to the SWAT phenomenon. The sight of such combat forces deployed in civilian neighborhoods in the United States is jarringly reminiscent of the images Americans once believed confined to repressive police states. It is tragic that such images are now the norm in America itself.

Image: A Maryland State Police officer watches a man shout into a megaphone during a May 2012 G8 Summit protest in Thurmont, Maryland. Briefing Room Art/Maggie Ybarra.