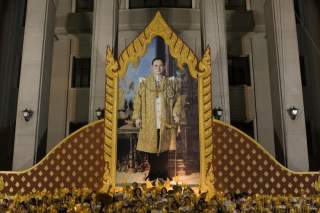 The people of Thailand are mourning today. The king they have revered and loved for seventy years has passed away.

Bhumibol Adulyadej was not just any king. To Thais, he was leader, father, mentor, moral authority and role model. As current Thai prime minister Prayuth Chan-ocha said when declaring a one-year government mourning period, the news of his passing is truly “devastating” for the people of Thailand.

The father of Thailand’s economic development, King Bhumibol stood as a shelter in the storm through Thailand’s sometimes turbulent modern history. But he also stood as a staunch American ally when we needed Thailand most.

He led his country into a treaty alliance with the United States and committed his people to battle side-by-side with the United States in Korea and Vietnam. Post-9/11, Thailand served as a valuable partner in the struggle against terrorism. It participated in the U.S.-led war effort in Iraq and contributed to reconstruction efforts in both Iraq and Afghanistan. Perhaps more importantly, Thailand made its military facilities available for U.S. transiting to both arenas.

In recent years, the king’s deteriorating health put stress on Thai politics, which, in turn, resulted in strains in U.S.-Thai relations. Since the most recent coup in 2014, the Thai military-led government has chafed under American criticism of its hedged and hesitant—and still unfulfilled—return to democracy. At the initiative of the United States, the military-to-military relationship has been curtailed—another thing that has not gone over well in Bangkok.

The king’s passing will not mean a quick return to pre-coup normality. Thailand needs breathing space. Its people need time to mourn. And as a friend, Washington should give it to them.

Managing American government commentary on Thailand’s democratic development is always a very tricky business. Over the next year, it will become even more sensitive. American diplomats would do best to keep criticism respectful and strictly in private channels.

This does not mean that Thailand’s election schedule and constitutional deficiencies should not remain priorities. Nor does it mean Washington should be silent about other concerns with the Thai government. Some issues, like the repatriation of Uighurs to China, must be addressed in real time in order to be effective.

But these issues and others must be handled with the utmost care—privately. Thai officials and politicians are still smarting from America’s refusal to offer Thailand direct assistance during the 1997 financial crisis. Get the diplomatic approach wrong in the context of the current trauma over the king’s passing, and the alliance may never recover.

After the year of mourning, Thailand will get a new king: Bhumibol’s son, Maha Vajiralongkorn. Making this adjustment will not be easy. Bhumibol is the only king the vast majority of Thais have ever known. There is palpable worry about how the kingdom will fare under new leadership.

The transition will be highly formal and symbolic. It will also be accompanied with political intrigue. In this environment, the United States would be wise to assume, despite uncertainties about Vajiralongkorn’s fitness for leadership, the transition will, indeed, take place. It is not a situation to be gamed toward a goal beyond reestablishment of a constitutional monarchy. Try to push the system too hard, and the United States will have made an enemy of an ally.

The U.S.-Thai alliance is a long-term proposition. It began in finding common cause in fighting communists. It picked back up in our joint effort to expel the Vietnamese from Cambodia in the 1980s. It has been critical to the war on terror. It has capacity built into it, and can be brought to bear on future, unforeseen challenges in much the same way. The best tribute Americans can pay to King Bhumibol is to act in a way that preserves the alliance that he began.