The 1980s Called. They Don’t Need Their Cruise Missiles Back. 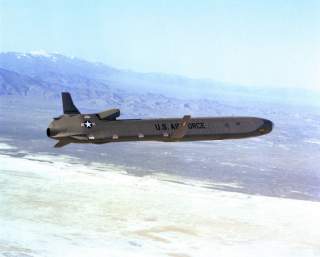 Lest anyone think that Barack Obama defanged America’s nuclear deterrent, we should all rest assured. The nuclear triad of submarines, land-based missiles and nuclear-armed bombers remains, just as it has for over 50 years. The Navy is going to produce a new ballistic missile sub. The Air Force would like to upgrade the ICBM force. The contract for the follow-on to the B2 bomber was announced just last week. If you’d gone into a coma the night the Berlin Wall fell and woken up 25 years later, you wouldn’t notice much difference other than lower numbers. The structures and strategies remain intact.

Those strategies are so persistent that once again, the United States is gearing up for a debate on yet another weapons system from another era. Apparently, the nuclear-armed B-2 and its stealth capabilities are not enough to guarantee our nuclear deterrent, at least not for advocates of a new nuclear air-launched cruise missile (what used to be called ALCMs). The “Long Range Standoff” (now blessed with the new acronym LRSO) would be the follow-on to the cruise missiles meant to be launched by bombers against the old USSR during World War III.

Why do we need a new LRSO? We don’t, unless you think America should be prepared for a protracted, all-out war with the old Soviet Union. The purpose of the old ALCM was to allow U.S. bombers to get close enough to fire its cruise weapons from a distance as part of a campaign of suppressing enemy air defenses and other targets at the edge of enemy territory. As part of an over nuclear war-fighting strategy, it made sense—at least, it made sense if you believed in nuclear war-fighting strategies.

Those strategies had their purpose during the Cold War as part of a complex deterrent ranged against a global ideological empire. Why are we still relying on such concepts now? Here’s how two advocates of the LRSO, Mel Deaile and Al Mauroni, described the need for the LRSO recently:

Deterrence and assurance only work if the U.S. military can hold all necessary targets at risk. A2/AD advances make it harder for our forces to reach their targets and our inattention to these limitations makes it harder to convince our allies that we can and will come to their defense in an emergency. Most importantly, dual-use aircraft and missiles allow us the greatest deterrent flexibility….The LRSO’s attackers also fail to account for its importance as a hedge vis-a-vis submarine-launched and intercontinental ballistic missiles. Should either of these legs be subject to technological failure or decreased capability, a flight of 30 B-52s armed with 20 LRSO missiles each would give the STRATCOM commander 600 warheads at the ready.

As Ronald Reagan said to Jimmy Carter: “There you go again.”

Think about the scenario here. Well, wait: actually, there isn’t a scenario, just a description of a capability. But as British strategist Michael Howard asked when confronted with arguments like this over thirty years ago, we have to ask ourselves: What is this war about? What, exactly, is the scenario under which the United States resorts to nuclear cruise missiles because enemy air defenses are too hazardous for the bombers? I can think of only one: a major nuclear war that’s already underway.

Advocates of the LRSO might argue that there are other contingencies to consider, but this a system whose obvious purpose is fighting a nuclear conflict. Notice the careful euphemisms in the description about why we need a new LRSO, and specifically about how those 600 airborne warheads would be a backup if other legs of the triad suffer a technological failure or “decreased capability.” If the entire ICBM and submarine force can suffer a “technological failure,” then clearly we’re doing something wrong. The more likely meaning of this expression is “a huge and paralyzing cyber-attack,” which would mean that World War III was already in the offing.

Technological reliability, however, isn’t really the point. The real rationale for the LRSO is in that second part, a “decreased capability” in the other legs of the triad, a bland term that actually means “wiped out by enemy nuclear strikes.” That’s why a future STRATCOM chief would need those 600 warheads: because all the other ones are gone. Is that the eventuality for which we’re still planning? If we’re still spinning out long-term nuclear war-fighting plans, then let’s say so and get on with that debate, instead of procurement fights that are nothing more than a way to spend money while providing a thin substitute for actually thinking about strategy.

This stale thinking about nuclear strategy always returns us to the same answers and the same force structure. Each nuclear review produces the same answer: we’re doing everything right, but we could do it a bit smaller. Each time we look at our strategy, we go back to what we think worked during the Cold War, and we try to replicate those capabilities. This is not strategy, it is intellectual stasis. Where the LRSO is concerned, former Secretary of Defense William Perry and former Assistant Secretary Andy Weber put it bluntly and accurately in their call to kill the LRSO: “The old Cold War requirement for such a capability no longer exists.” But why let reality get in the way of a program?

The United States and Russia are the only two countries who maintain a triad. We’re about to spend scads of money modernizing that triad, including replacing the most advanced bomber in the world with the next more advanced bomber in the world. We don’t need to reinvest in a nuclear program meant to destroy Soviet air defenses in 1985. How large a deterrent we need is an argument worth having, but in the meantime, let’s stop trying to refight the Cold War. That mission’s already been accomplished.

Tom Nichols is Professor of National Security Affairs at the Naval War College and an adjunct at the Harvard Extension School. His most recent book is No Use: Nuclear Weapons and U.S. National Security (University of Pennsylvania, 2014) The views expressed are his own. You can follow him on Twitter: @RadioFreeTom.