The 3-Step Guide for Tricking America into a War 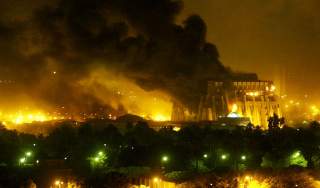 Why did the United States invade Iraq in 2003? The stock answer is because of a lie—the drummed-up belief that Saddam Hussein was stockpiling weapons of mass destruction (WMDs). After all, everyone knows that no such weapons were ever found. However, the claim that the U.S. invaded Iraq solely because of WMDs is also a lie. On its own, the WMD explanation is false because it was not the first or determining reason why America went to war. It is a concision of history that is as misleading as attributing the inevitability of World War I to Gavrilo Princip being a crack shot. That is not a sufficient or complete explanation and is at best a lie of omission that dumbs down the causes of the war.

The lie of why America invaded Iraq must be torn down now, though, before history is repeated. Political seismologists are even now noticing similar rumblings around Iran to those that occurred before the Iraq War. As Jacob Heilbrunn, editor of the National Interest, recently wrote, “the spirit of George W. Bush has once more begun to inhabit the White House.” National security adviser John Bolton, Heilbrunn said, “is busy urging Trump to revive the regime change policies that seemed to be discredited after the 2003 Iraq War, but are now making a comeback.”

Such policies should remain discredited, and so it is necessary, if not to discard the WMD lie entirely, then to situate it in a more accurate context. The WMD narrative is not unique to Iraq and serves as a useful warning today. It is also necessary to acknowledge that the United States set against Baghdad well before Secretary of State Colin Powell shook a vial of anthrax at the United Nations, dramatically making the case that Iraq had WMDs. The fact is that the case for invasion was made up of three components largely separate from Saddam’s supposed WMDs.

First, the White House did its utmost to link Iraq to as many problems as possible in the region, be it supporting terrorism, antagonizing Gulf states, or threatening Israel. This is not to say Iraq was uninvolved in these activities as clearly it was. Rather, Iraq’s support was too often described in ways suggesting it was decisive, essential to the activities’ survival, and unique to Saddam’s leadership. More often than not, however, such support by Saddam was complementary, less than critical, and a result of more-or-less fixed Iraqi geopolitics. Iraq, for instance, remains formally at war with Israel even without Saddam in power.

In addition, the U.S. continually, and quickly, listed many grievances in the runup to the war. Doing this created momentum and accumulated guilt onto Saddam and his regime more than any one specific Iraqi action could have done. Furthermore, a list of grievances made them seem all the more credible and of a piece. The image created was that every grievance was part of some coordinated, even grandly strategic, and therefore dangerous, plot by Saddam’s Iraq. Such a dangerous actor therefore required a response, even though the reality is often otherwise.

Today the current White House is attempting the same with Iran. Ambassador Nikki Haley explained to the UN Security Council on May 15 that when it comes to the conflicts in Syria and Yemen, and with Hamas, “the common thread in all of this is the destabilizing conduct of the Iranian regime.” Secretary of State Mike Pompeo followed suit with his speech on May 21, adding injustices in Afghanistan and Europe to the list. As was the case with Iraq, Iran is indeed involved and even influential in each of these conflicts. But Ayatollah Ali Khamenei’s blessing is hardly the be-all and end-all. The implied idea here is that Iran limiting its support would end these conflicts or that a different regime in Tehran would suspend its support altogether. But these ideas are more or less bunk. For example, neither Syria nor Yemen would suddenly become a haven of peace and stability upon the exit of Iran from their conflicts. Additionally, Palestinians would have charged the Israeli fences with rocks and homemade flaming kites to protest the U.S. embassy relocation to Jerusalem regardless of Iran’s influence. Palestinians do not need Iran’s robust international financing or high-end technology to continue their struggle with Israel.

Second, the George W. Bush White House and its Iraq War supporters pushed the idea that there was strong local support among Iraqis, who were in fact great admirers of America. Take the contribution of Bernard Lewis, who just died on May 19 at the age of 101. The eminent historian was brought in to educate the Bush administration on the Middle East right after 9/11, and he had an equation to reveal which locals were really on America’s side. “In countries like Saudi Arabia and Egypt, with governments seen as American allies, the popular mood is violently anti-American,” Lewis explained in December 2001. “In Iran and Iraq, with governments seen as anti-American, public opinion is pro-American,” he added. Thus, public support is the inverse of government support. This dodgy equation led him to an ominous conclusion that would support further U.S.-led regime change: “The joy displayed by the Afghan people at the ending of Taliban rule could be repeated, on a larger scale, in both these countries.”

Moreover, it was often added that democracy was supposedly concomitant with an affinity for Americans. “In two countries, Iraq and Iran, where the regimes are strongly anti-American, there are democratic oppositions capable of taking over and forming governments,” Lewis explained in 2003. “We, in what we like to call the free world, could do much to help them, and have done little.” After President Trump’s exit from the Iran nuclear deal, Secretary Pompeo was keen to explain that the United States will “advocate tirelessly for the Iranian people.” Recent protests, he added, should be understood not as calls for reform but rather as cries for revolution, for “liberty,” he said. Commentators, too, are already cajoling the president to “fight for Iranian freedom.”

Third, the White House and its regime-change advocates emphasized that the Iraq war would be, well, a lark. It would be an easy and achievable adventure at minimal cost. It would be "a cakewalk." After all, it was said, America avoided quagmires and fiascos in the Middle East and could still do so while forcing regime change. As Lewis again explained 2003, “if one compares the record of American policy in the Middle East with that of other regions, one is struck not by its failure but by its success. There is, after all, no Vietnam in the Middle East, no Cuba or Nicaragua or El Salvador, not even an Angola.” It’s hard to make that argument now, of course, but has the lesson been learned? Unfortunately, today, despite all evidence since to the contrary, there remains no shortage of voices ready to speak to the ease with which a nation might be invaded and occupied by the United States.

What we should learn from Iraq is that there’s a tried-and-true recipe for beguiling the United States into war; link every irritation directly to the adversary, assert robust local support for the invasion and claim the whole conflict will be a lark. In short, link, local, lark. While the reasons why America went to war in 2003 are many and varied, the main three are encapsulated in this trio and serve as both a formula for those who want war and a warning to those who wish to avoid it.

John Richard Cookson is a non-resident fellow at the Chicago Council on Global Affairs.