The 3 Worst Presidential Candidates of All Time 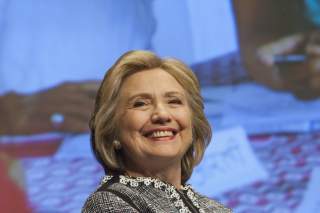 Hillary Clinton hasn't been a declared candidate for president for very long, but her 2016 campaign has so far been cringeworthy. She is avoiding voters and the press to a degree that likely wouldn't be tolerated if she were a Republican.

It is still far too early to crown Hillary the worst presidential candidate ever, however. Not only are we months away from any serious action in the campaign, but she is still leading in the polls. She is demolishing a weak, largely theoretical Democratic field and nurses comfortable leads over potential Republican opponents in most national polls (though some of the swing state polling suggests she's not in for a cakewalk).

Eight years ago, Clinton blew a seemingly insurmountable lead and wound up losing the 2008 Democratic presidential nomination to a freshman senator. (You may have heard of him.) Even that doesn't qualify her as the worst presidential candidate ever. After all, she still won New York, Florida, Ohio, California, Texas and Pennsylvania.

What does it take to be the worst? Clinton has competition from the 2012 Republican primaries if she wants to claim the crown. If Rick Perry had been even minimally engaged, he probably could have beaten Mitt Romney. Instead, he seemed to run for president on a lark, was woefully unprepared and quickly collapsed.

Jon Huntsman didn't have quite as plausible a path to the GOP nomination. He was always going to have a hard time living down the fact that he served in Barack Obama's administration, even if it was only as U.S. ambassador to China. Huntsman also probably needed Romney to implode as rapidly as Perry did.

Huntsman had a fairly conservative record as governor of Utah. But once he got into the race, he did everything he could to reinforce concerns that he was a closet liberal. Most of these feints to the center were trivial gestures, like tweets mocking widely held conservative views on global warming, but the base was just getting to know him.

Camping out in New Hampshire long enough to eke out a respectable third-place finish prevented the campaign from being a total embarrassment. But Huntsman's attempt to be the John Anderson of 2012 almost certainly finished off his political future in the party.

Barry Goldwater and George McGovern suffered two of the most lopsided defeats in American history, but you can't really call either of them the worst. Goldwater and McGovern permanently reshaped their respective political parties. The country wasn't ready for them, but in a real sense, their losses were victories over the long term.

Jesse Jackson, Pat Robertson, Howard Dean and Ron Paul all showed you can move your party without getting close to the nomination. Jackson mobilized black voters, Robertson helped revive the organized Christian right, Dean laid the groundwork for the progressive network that helped Obama four years later, and Paul rebuilt the libertarian wing of the Republican Party.

So who actually qualifies as the worst?

Remember when the senior senator from Utah ran for president in 2000? You probably don't, but he did. He dropped out after finishing sixth in the Iowa caucuses, winning just 1 percent of the vote.

You expect someone like conservative activist Gary Bauer, who tried to run for president that same year, to embarrass themselves in a campaign for the White House. Ditto gadflies like Bob Dornan, Dennis Kucinich and Mike Gravel. I never understand why important senators—and Hatch is a very accomplished and important lawmaker—run no-hope presidential campaigns.

Richard Lugar did it in 1996. Joe Biden and Chris Dodd did it on the Democratic side in 2008 (though Biden's status as the incumbent vice president of the United States might answer the question of why senators try to do this). Hatch’s campaign obviously didn't hurt his standing in Washington, but it wasn't even as impactful as Gravel's.

I proudly cast my first presidential vote for Dole in 1996. I have no regrets about it (I seldom do when the candidate loses). The Kansas senator was a war hero and an American institution. His presidential campaign, however, was really bad.

Even when he was debating Alan Keyes and Morry Taylor, the whole campaign had the feeling of a doomed enterprise. Dole was competitive in some 1995 polls, but the closer we got to the election the more his defeat seemed like a foregone conclusion. Dole wept when he resigned his Senate seat, not the best look for a limited-government presidential contender, and made it sound like going home to Russell, Kansas was some kind of death sentence.

Dole '96 was less a presidential campaign than a farewell tour, which was fitting because he won the presidential nomination on his third try as if it was a retirement gift. Republicans might as well have nominated Dole's 1976 running mate Gerald Ford.

Eleven years later, it's not really clear why the general ran for president or what he hoped to accomplish if elected. He seemed undecided as to whether he was a Republican or Democrat. Some reports say he became concerned about the direction of the GOP when Condoleezza Rice supposedly told him the Bush administration wouldn't have done the Kosovo war—a funny thing to be worried about when Democrats were angry that the Bush administration did do the Iraq war.

And Clark didn't seem to know where he stood on the Iraq war. "At the time, I probably would have voted for it, but I think that's too simple a question," he said in an interview. "I never would have voted for war," he later declared. "The war was an unnecessary war, it was an elective war, and it's been a huge strategic mistake for this country."

As it happens, the Democrats did end up nominating a candidate who voted for the Iraq war—John Kerry probably belongs on this list, though he ultimately came too close to winning to make the cut—and he was out of the race in February 2004, only winning Oklahoma.

Let's see if Lincoln Chafee can give any of these ill-fated candidates a run for their money.