5 Crucial Defense Reforms That Will Save the Pentagon 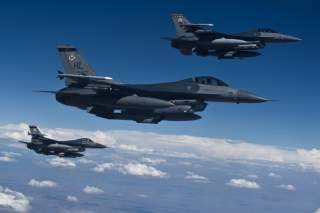 Congressman Mac Thornberry, the new chairman of the House Armed Services Committee, is unveiling this week a set of proposed reforms for the way the Department of Defense buys equipment and contracts for other services. This is a very welcome focus for a new committee chairman at this juncture in history. Combined with the reformist instincts of his fellow chairman, Senator John McCain of the Senate Armed Services Committee, as well as the background of Secretary of Defense Ash Carter and his top team, there is likely to be real progress in the months ahead. But to complement all these efforts, we also need a broader policy debate that engages Washington beyond just the defense community and that focuses more on the big picture. The changes being discussed now generally look good, but trend towards the more modest side of the possible and desirable reform agenda.

First, though, give credit where it is due. The Pentagon is already well into its better buying-power initiatives, which focus on the broad articulation of a number of common-sense reforms like better education for the acquisition workforce and clearer emphasis on affordability in the development of contracts. Combined with kindred spirits on Capitol Hill, further progress is likely in a number of areas. For example, paperwork requirements can be simplified enormously on many types of contracts, and more of the Pentagon’s smaller contracts can be awarded and executed without the formal accoutrements of the Department of Defense’s notorious milestone system. Some recent proposals have also included ideas like bringing the military service chiefs back directly into the weapons-buying decision-making process.

All these ideas are generally well motivated. They are also generally about as apple-pie as rooting for the Orioles or Nats, or your other favorite home team, on opening day in April. If I have a concern, it is that they sound so unassailable as to make one wonder where the rubber really meets the road. In other words, if no one can be against them, do they really have teeth? There are so many of them—I count thirty-two in Better Buying Power 3.0 alone—that it is hard to know which ones represent the real priorities. Moreover, most of the themes and ideas behind them date back to the earliest post–World War II days of acquisition-reform policy under Secretary McNamara and others. There is often less new here than would meet the eye.

In fairness, and to stay with the baseball theme, much about acquisition reform is inherently a lot of small-ball improvements that collectively may save the Department of Defense only a few percent of its total procurement budget in the best of cases. That is not meant as a damning criticism. To a large extent, for a country that continues to field the best weaponry in the world and to spend only about 3.5 percent of its GDP on its military in the process, the system is not fundamentally broken, so complete overhaul has not been seen as necessary. All that said, there is a case for more fundamental change in some areas and it would be good to see future acquisition-policy discussions consider some of these.

As former Deputy Secretary of Defense Bill Lynn has argued recently in the pages of Foreign Affairs, DoD now depends on a small base of largely defense-oriented American companies, not only to produce weapons, but for future military innovation as well. This defense industrial base consists of very good firms, to be sure. But the nation’s dependence on them may have gone too far. Moreover, while these firms have clearly learned how to navigate the Pentagon’s labyrinths of bureaucracy and paperwork, even they suffer from its onerous rules and regulations. For instance, DoD sometimes seems more interested in suppressing their profit than in getting maximum benefit for the taxpayer and warfighter.

As such, while Washington continues to debate acquisition reform, let’s get ourselves into the technical weeds when necessary, but let’s also focus on the bigger picture. Here are several ideas that are worth considering as legislators, regulators and other interested parties haggle over change in coming months:

– Use Federal Acquisition Regulations Title 12 more often, rather than falling back on Federal Acquisition Regulations Title 15. In theory, the Pentagon is supposed to buy commercial goods, as under the so-called FAR 12 code, whenever possible, and avoid the complex and cumbersome FAR 15 rules that involve negotiated contracts. In these FAR 12 cases, the Pentagon can in theory behave like a normal customer and avoid the complex steps and onerous paperwork involved in a major weapons procurement process. But the tendency is still to define requirements in such a way that there are enough military-unique characteristics for whatever radio or phone or jeep or compute is at issue that the FAR 15 code is used almost by default.

– Streamline oversight when the Pentagon can rely on competition to discipline firms about price. Today, for example, the Defense Contracts Management Agency has an on-site presence in many factories; its personnel literally tabulate what it thinks weapons should cost, based on all sorts of details about the production process. This may make sense for complex weapons being built by just one supplier. But for cases in which there is a commercial equivalent OR two producers, the competitive process can provide the discipline—just as it does in the commercial market—and oversight can be scaled back enormously. DoD can base its future-years purchases of a given weapon in part on which of two companies may be providing a better buy at present.

– Follow the JIEDDO model for other technologies. When so many Americans were being hurt or killed by improvised explosive devices in Iraq and Afghanistan, the Congress allowed the Department of Defense to create special, expedited acquisition procedures and ultimately the Joint Improvised-Explosive-Device Defeat Organization to research and produce relevant technologies quickly. Deputy Secretary of Defense Paul Wolfowitz and others championed the effort, to great effect. This concept could be used, especially for lower-risk technologies that nonetheless are important to build quickly.

– Break down information technology purchases into smaller batches. There are times when creating a huge common computer infrastructure with the same machines or software across hundreds of thousands of users may make sense. There are other cases where this big approach puts too many eggs in one basket. By using open-source and modularity concepts, making sure different systems can talk to each other but allowing more discrete and smaller buys by various agencies, the Department of Defense may do better.

– For technologies that have commercial analogues, but certain military-specific attributes up to a certain percentage of value, allow firms to keep their intellectual property rights rather than sharing all relevant data with the government. In such cases, the government cannot really claim to have generated the relevant expertise and information, so it makes more sense to keep it proprietary. This principle could apply to anything from aircraft engines to smart phones to space boosters. It could help convince many companies wary of doing business with the Pentagon to reassess.

Nothing about acquisition reform is easy. But if we combine the tedious technical detail that often afflicts these debates with some bigger-picture conceptual thinking, and examples not only of problems that exist today but specific programs that could work better under a different set of rules, we may be able to help broaden and strengthen the consensus for major reform. America will then have a better chance of keeping its impressive global lead in defense technology for many years and decades to come.