The 5 Most Deadly Navies in Asia 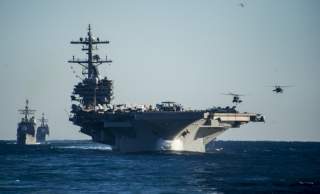 Asia has some of the world’s best militaries—their navies are no exception.

But how does one rank them? Any ranking of military force obviously requires parameters. When we say best, what exactly do we mean? The quantity of arms or the quality? The number of platforms, their firepower and their age? Or the doctrine that accompanies their use and the training and morale of their operators?

All important considerations, to which we should add: how far does the military force in question enable the policy aims of its civilian overlords? Or conversely, how does it limit the country’s options?

An examination of Asia’s navies—or more precisely, navies that operate regularly in Asian waters—puts these questions in the spotlight, not least because there is a massive disparity in the size and quality of the maritime forces in question. In a (highly hypothetical) fight between, say, India and Singapore, you’d expect the Indian Navy (IN) to best the Republic of Singapore Navy (RSN): it’s got bucketloads of experience, more ships, more manpower and more money to buy or build replacements.

But which is the better navy? In qualitative, operational and policy-making terms, you’d say Singapore’s. And that’s why the RSN in is in this top five list, and the IN doesn’t make the cut, despite its heritage, history, two aircraft carriers and imminent commissioning of a nuclear-armed submarine.

South Korea has big ambitions for its navy and it is supporting these with major investments. In recent years, it has turned the Republic of Korea Navy (RoKN) from what was essentially a littoral patrol force into an emerging blue-water navy that can protect its offshore islands, sea-lanes (and thus economic interests) and play a role in international maritime projects, whether humanitarian assistance and disaster response (HADR) or anti-piracy operations off Somalia.

The navy’s reputation for coastal defense—its primary mission—was damaged by the sinking of the corvette Chon An in the Yellow Sea (West Sea) in March 2010, most likely by a North Korean torpedo. To its credit, Seoul responded quickly with a defense-reform plan that created a new command structure for the disputed West Sea region and bolstered anti-submarine warfare capabilities.

Beyond its immediate responsibility to deter and interdict North Korean activities, the RoKN is also building a formidable fleet that can operate globally. Fifteen destroyers, twelve of which will be equipped with the Aegis Weapon System, up to twenty-four Incheon-class frigates and a new generation of attack submarines make the RoKN one of the world’s more potent offshore forces, while the RoK Marine Corps is provided with one Dokdo-class amphibious assault ship, with a second reportedly on the way.

So the kit is present, but what about training and operational capabilities? The navy supports South Korean international outreach efforts—a South Korean flag officer has commanded the multinational counterpiracy Combined Task Force 51 three times to date, while the RoKN also provides an excellent shop window for Seoul’s burgeoning presence in the international-defense trade. While budgetary issues could curtail its ambitions, for the moment, South Korea’s navy seems to be putting its money where its mouth is.

Singapore has spent the last fifty years showing Southeast Asia that the adage “quantity has a quality all of its own,” isn’t necessarily accurate when deterrence is involved.

The Republic of Singapore Navy (RSN) is just one element of the city-state’s considerable qualitative military superiority over its neighbors—a superiority that, along with smart diplomacy and alliance building, gives it an almost-impregnable defensive shield.

As well as providing defense for Singapore’s 193-km coastline, the RSN can also provide offshore defense of sea-lanes and plays a vital role in regional HADR operations. Six state-of-the-art frigates, six corvettes, five submarines (with two more on order), four amphibious landing ships, four mine warfare vessels and numerous patrol craft (and new versions in the pipeline) provide the hardware for crews that are motivated, well trained and enjoy a good reputation, both at home and abroad.

Until recently, the largest navy in Northeast Asia, the JMSDF, has a well-earned reputation as a world leader in anti-submarine and mine warfare, although the threat from North Korean ballistic missiles led it to devote resources to build a fleet of Aegis-equipped ballistic-missile defense destroyers (now six, with two more planned) that in some eyes diluted its primary mission of maritime superiority.

That appears to be back in the spotlight, thanks to China’s newfound sense of itself as a maritime power. Japan has responded by increasing its submarine fleet from sixteen to twenty-two boats and boosting its combined destroyer and frigate fleet from forty-seven to fifty-four ships. It is also investing heavily in new Kawasaki P-1 maritime patrol aircraft, and more Sikorsky-Mitsubishi SH-60Ks and AgustaWestland MCH101 naval helicopters.

In addition, it is expanding its amphibious and flattop fleets, with first-of-class helicopter carrier JS Izumo (DDH 183) currently on sea trials. The 248 m-long, 24,000-tonne vessel is the largest Japanese military ship built since the Second World War. While it is currently optimized for ASW via fourteen helicopters, unsurprisingly the specter of using Izumo—or the refurbished Osumi-class amphibious flattops—as forward operating bases for F-35Bs has been touted by those looking forward to, or fearing, a more “normal” Japan with power-projection capabilities.

The JMSDF’s ability to transform itself from a Cold War adjunct to the U.S. Navy to an independent entity that fulfils Tokyo’s current policy requirements—SLOC security, anti-piracy, HADR and BMD—suggests that it has the flexibility, wherewithal and confidence to make further changes as the geopolitical and constitutional environment changes. Perhaps the biggest issue facing the JMSDF is recruitment: staffing is already an issue for some ships, although Japan’s commercial, cultural and industrial acclimatization to automation may go a long way to assuaging this issue.

National Interest readers will be familiar with the challenge posed to U.S. interests in Northeast Asia by China’s anti access/area denial capabilities; suffice to say that the People’s Liberation Army Navy (PLAN) is the tip of the spear and has invested heavily in anti-ship missile capabilities that—on paper—outperform any Western competitors.

Beyond its missiles, China’s 2013 defense White Paper noted that the PLAN is "developing blue-water capabilities for conducting mobile operations, carrying out international cooperation, countering non-traditional security threats, and enhancing its capabilities of strategic deterrence and counterattack.” These are big changes for a force that until the mid-1980s was optimized for coastal defense, although the transformation in investment and platforms means these missions are in no way beyond the PLAN of 2015.

In the past year, we’ve seen continued investment in major surface combatants. Perhaps the greatest examples of Chinese innovation have been the developments of the Type 052C/D guided-missile destroyers—Type 054 frigates and the Type 056 corvette. The latter is the most recent to enter PLAN service and its accelerated production schedule makes it a poster child for Chinese self-confidence in this sphere.

The Pentagon also believes that the Type 094 boomers are finally entering service, while the continued development of bases and paramilitary forces in the South China Sea further supports PLAN offshore operations.

So far, the most popular counterargument to the narrative of China’s naval rise is that the PLAN is untested. That may be true, but it is difficult to think of any navies that have engaged in conventional peer-to-peer warfare anywhere in the world in recent years, so this point may be moot.

A more persuasive counterargument to Chinese military capabilities is that the PLA and PLAN are rife with corruption, factionalism and could go rogue. Given the opacity of China’s military-political system, it is impossible to confirm or deny this; what is clear is that confrontational behavior by individual Chinese naval platforms—whether airborne, surface or subsurface—has damaged the PLAN’s international reputation as a responsible operator in the global commons, but perhaps enhanced its domestic reputation as a protector of Chinese “core interests.”

So to No. 1. The U.S. Navy remains without peer globally or regionally, and given the “pivot” or “rebalance,” this is likely to continue for the foreseeable future.

The Asia-Pacific is getting the lion’s share of new U.S. platforms, whether these are P-8 maritime patrol aircraft, Littoral Combat Ships or attack submarines; it is also a region where the sea is the dominant stage for the United States to play its role of global policeman.

Sequestration and commitments elsewhere may undermine this status in the long term, but perhaps we should not count the U.S. Navy’s regional influence only in ship and personnel numbers—overwhelming as these are.

To be sure, aircraft carriers, amphibious assault ships (and the marines they embark) and destroyers all give the White House a unique opportunity to deploy force to protect or advance U.S. interests, but unique among navies listed here is the USN’s symbolic value as a manifestation of national intent.

Combine that with Washington’s mutual-defense treaties with countries across the region (Australia, Japan, the Philippines, Thailand and South Korea) and defense cooperation with others (such as Singapore and New Zealand)—relationships that allow forward deployment and homeporting in strategically vital areas—and it becomes clear that the U.S. Navy is stronger than its 288 Battle Force Ships, over 2,000 naval aviation aircraft and more than 1,000 U.S. Marine Corps aircraft.