The 5 Most Lethal Battleships That Never Set Sail 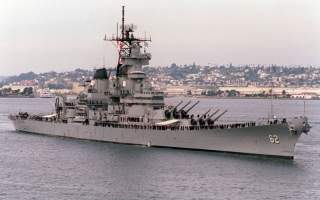 Battleships represented huge, long term investments of national treasure. The took a long time to design, and a long time to construct.  In the complex geopolitical and technological environment of the 20th century, battleships planned did not always become battleships built.  This article examines five powerful classes of battleships that never saw the sea.

At the end of World War I, the British, Japanese, and American navies each embarked on an impressive battleship construction spree. The United States, relatively untouched by the war and with the world’s largest economy, was best positioned to win this incipient naval race. The first two American entries were the Lexington class battlecruisers and the South Dakota class battleships.

Fortunately for the taxpayers of the United States, the Washington Naval Treaty intervened.  Along with their counterparts in Japan and United Kingdom, the South Dakotas were cancelled.  All of the six ships laid down were scrapped before completion.

The G3 class battlecruisers represented a radical departure for the Royal Navy. HMS Hood strongly resembled previous British battlecruisers, although she carried the armor of a battleship. The G3s would adopt several innovations, including the 16” gun, triple turrets, and a modern all-or-nothing protection scheme.

Displacing 48,000 tons, the G3s would have carried 9 16” guns in three triple turrets, with a design speed of 32 knots and armor commensurate to their armament.  The G3s were among the ugliest battleships ever conceived, a severe, utilitarian break with the lovely battleships and battlecruisers of the Grand Fleet.  Nevertheless, they were superior in armor and armament to the battlecruisers contemplated by Japan and the United Kingdom at the time.  Indeed, notwithstanding the fact that they were supposed to enter service in 1925 and 1926, they would have proven competitive with many of the fast battleships that entered service in the 1940s.

As with the South Dakotas and several other battleship classes, the Washington Naval Treaty intervened, and the G3s were never laid down. In the absence of the Treaty, they might have broken the back of the Treasury.

In 1918, the Bolshevik regime inherited the Imperial Russian Navy, consisting of a few obsolete dreadnoughts and a host of older, small ships.  This flotilla, inadequate to the defense of the USSR’s extensive maritime frontiers, nevertheless served as the core of the new Soviet Navy. During the 1920s and 1930s, Soviet authorities floated various schemes for reconstructing the fleet.  The demands of the civil war and the relentlessly hostile international environment meant that Moscow had to delay in favor of other priorities.  Moreover, the Soviet economy lacked the strength to withstand a major program of naval construction.

By the late 1930s, however, the USSR was finally prepared to commit to the reconstruction of its battlefleet. Moscow sought warships that could compete with the best that Germany and Japan (then regarded as its two most likely opponents) could offer. The fifteen ships of the Sovetsky Soyuz class would have displaced some 60,000 tons, carrying 9 16” guns in three triple turrets and making 28 knots. They would have provided the core of the four Soviet battle squadrons in the Arctic, the Baltic, the Black Sea, and the Pacific. Unfortunately, design requirements exceeded the capabilities of the Soviet shipbuilding. The Soviets could not manufacture sufficiently thick armor plate, resulting in weakened protection. More importantly, Soviet shipbuilders lacked expertise in such large ships. The Soviets had to cancel one of the ships after the laying of the keel, because the shipbuilders had so botched the job that it could not be repaired.

In any case, the German invasion of 1941 ended Stalin’s dreams of a huge, modern battlefleet.  Soviet landpower and airpower would save the Motherland, and the battleships of the Sovetsky Soyuz class would never see service.

As the restrictions imposed on Germany by the Treaty of Versailles crumbled, then collapsed, Hitler sought to rebuild German naval strength. The first step was construction of the two Scharnhorst class battleships, followed by the much larger and more powerful Bismarck and Tirpitz. With lessons learned from those ships, the Germans would begin the real core of the fleet, the six battleships of the H-39 class.

The H39s resembled enlarged Bismarcks, but likely would have benefitted from lessons learned from that class. The H-39s would have displaced 57,000 tons, made 30 knots, and carried 8 16” guns in four twin turrets, a decision designed to ensure an adequate rate of fire. German planners expected to contest not only the North Sea, but also the Baltic, and were paying close attention to the progress of the Sovetsky Soyuz class.

Only the first two H39 class ships were laid down when the war began. The Nazi government decided to concentrate on other priorities, including smaller vessels and equipment for the Luftwaffe and the Wehrmacht. The material assembled to build the two ships was broken up and repurposed.

In the late 1930s, Japan embarked on an ambitious project to build a world-beating Navy. The first step in this project was the construction of the five battleships of the Yamato class, which would, upon commissioning, become the largest battleships in the world.

The next step was the A-150 class. These ships, even larger than the Yamatos, would have carried an armament of six 20.1” guns in three twin turrets. These guns would easily have defeated the armor scheme of any battleship in existence, or any seriously planned by a major navy. Although specifications remain hazy (the Japanese destroyed all documentation regarding the ships at the end of the war) they likely would have made about 30 knots.

The Japanese intended to lay down the first of the A-150s in 1942. However, war intervened, and the Imperial Japanese Navy determined that it needed smaller support ships (not to mention aircraft carriers) more than another set of battleships. Along with the last two Yamatos, the A-150s were never built.

All of these warships would have proven formidable in battle. However, they could not withstand changes in technology, or in the international environment. The enormous investment that the ships would have required found its way into smaller ships, other military equipment and, in a few cases, more peaceful endeavors.