The 5 Most Powerful Middle Eastern Empires of All Time 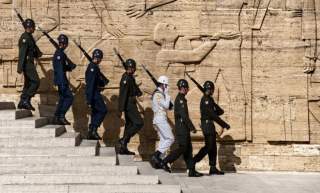 The Middle East is the cradle of civilization, centrally located between all the other major regions of Eurasia and Africa. Trade and conquest have always radiated out of and into this region. It is inevitable, then, that some of history’s most notable and powerful empires were centered in the Middle East. However, the region has always been fraught with power-struggles and danger for would-be empire builders: states rose and fell swiftly and suddenly.

Here are five of the Middle East’s most powerful empires:

The (neo) Assyrian Empire, which lasted from around 900 B.C.E. to 612 B.C.E.,was the world’s first true empire in the sense that it ruled over a multiethnic population and a vast variety of land. At its peak, Assyrian control extended over the Fertile Crescent (Mesopotamia, Syria, and the Levant), parts of Iran and Anatolia, and even to Egypt for a while.

It was especially brutal—even for its time—spending most of its history at war, and subjugating most of the major nations of the Middle East at the time. The Assyrian Empire didn’t merely defeat its enemies like previous empires; instead, it attempted to totally destroy them once and for all by deporting and displacing defeated populations and moving them around its vast territory. In this way, many ancient nations that had been around for thousands of years, like the Elamites, vanished from history.

One key factor in Assyria’s rise and success was the fact that it controlled valuable ores in hilly terrain in today’s Kurdistan region, which it could use for weapons. By contrast, most of its neighbors, who lived in flat lands, had less access to metals. However, the empire made many enemies and, exhausted by constant warfare, eventually fell to a coalition of forces in 612 after the Battle of Nineveh.

The Achaemenid Persian Empire was the first major global empire in history, spanning most of the civilized world and containing 44 percent of the world’s population at the time, a proportion that has never since been exceeded. The Persian Empire managed to successfully rule much of the Middle East, Central Asia, and parts of South Asia and Europe for hundreds of years.

The empire was founded in 550 B.C.E. by Cyrus the Great, who was notable for establishing some of the policies that made his empire successful. For example, he allowed the empire’s heterogeneous population’s cultural and religious autonomy. This made revolts infrequent and gave its many nationalities a stake in the empire’s continued existence; the Old Testament declared Cyrus the “anointed of God.”

The Persian Empire also benefited from being well-connected by a series of roads, using a standardized official language, having a bureaucracy, and establishing many of the other hallmarks of future empires. However, the fall of the empire to Alexander the Great by 330 B.C.E. was spectacular in its swiftness. Perhaps this was the result of the entropy that befalls all empires. As Cyrus the Great warned the Persians, the luxuries and wealth that comes from ruling a successful empire eventually leads to soft people.

After the death of the Prophet Muhammad, his successors, the four rightly-guided Caliphs (the Rashidun Caliphate) won spectacular victories over the Byzantines and Persians, creating an Islamic Arab empire larger than the Roman one. Yet, this could have been a short-lived burst of Arab expansion but for their successors, the Ummayads, who both expanded and consolidated the Arab empire, establishing Islam as a permanent force in the Middle East.

The Umayyads came to power with one Muawiyah in 661 C.E., who controversially seized control of the empire and created a hereditary Caliphate. The Umayyads ruled from Damascus, shifting Arab power out of Arabia and establishing a permanent Arab presence in the rest of the Middle East.

During the Umayyad Caliphate, the empire expanded to include North Africa, the city-state of Samarkand in today’s Uzbekistan, Sindh in today’s Pakistan, and Spain. Everywhere they went, they met sustained resistance but the Umayyads were highly persistent and their tenacity overcame their enemies. The city of Bukhara in today’s Uzbekistan is said to have revolted against the Umayyads three times before finally being subjugated. A Berber queen, Kahina, spent decades fighting the Arabs in North Africa in the late 600s, but was eventually overcome.

After a revolt, the Umayyads were succeeded by the Abbasids as Caliphs in 750 C.E., but the unity of the Islamic world was soon shattered. The Abbasids only ruled effectively for a century before becoming spiritual figureheads, as a variety of alternative Caliphates and sultanates, kingdoms, and emirates arose from the splintering Arab state, and many of these were ruled by Turks, Persians, Kurds, Berbers, and others.

The Seljuk Empire was founded by Turkic mercenaries from Central Asia who first conquered Khorasan, then Persia, and finally Iraq. Their rise to power began in 1040 C.E. when they defeated the dominant power in the eastern Islamic world (Afghanistan, eastern Iran), the Ghaznavids, at the Battle of Dandanaqan; from 1055 C.E., the Caliph in Baghdad was a figurehead of the Seljuk sultan. Indeed, the Seljuks were staunch Sunnis who answered the request of the Abbasid Caliph to free them from the control of a previous Persian Shia dynasty (Buyids).

The Seljuks also defeated the Shia Fatimids of Egypt in the Levant, capturing Jerusalem in 1073; their alleged brutality and harassment of pilgrims was a factor in setting off the Crusades. Under the Sultan Alp Arslan, they were able to crush the Byzantines in a way that the Arabs were not, seizing most of Anatolia after the Battle of Manzikert in 1071. Thus, the Seljuks were able to establish the largest empire in the Middle East since the early Abbasids, stretching from the present Chinese border to the gates of Constantinople.

The legacy of the Seljuks is significant. Under their rule, large parts of the Middle East began to be Turkified or settled by Turks, especially Anatolia (Turkey) and Azerbaijan. Sunni Islam became increasingly dominant throughout the Middle East as Shia power declined. The Seljuks were patrons of the Persian language and courtly culture—despite being Turks—and the decline of the prestige of Arab culture in the Islamic world continued. The Seljuks’ center of power was Persia and they revived many traditions of Persian statecraft. Their enthusiasm for conquest also led to increased confrontation with Christian Europe.

The Ottoman Empire is impressive for its longevity and breadth. Founded by Turks in Anatolia in 1299 C.E., it expanded rapidly, conquering Constantinople (Istanbul) and making it its capital in 1453, lasting all the way till 1923. In addition to being sultan, the Ottoman ruler was also widely recognized as a Caliph throughout the Sunni Islamic world after 1517.

The Ottomans were the first Islamic state to conquer and rule the Balkans, defeating the Serbs, Bulgars, Byzantines, and Hungarians. These borderlands represented the first stage of Ottoman expansion. After the fall of Constantinople in 1453, the Ottomans conquered various Turkish principalities in Anatolia, most Kurds, and even Iraq, after defeating the Safavids of Persia at the Battle of Chaldiran in 1514. However, the major Ottoman triumph came in 1516-1517, when the empire defeated the Mamluks of Egypt. This lead to not only wealthy Egypt and Syria coming under Ottoman control, but also the Hejaz, which included the holy cities of Mecca and Medina. Ottoman power continued to expand to include overlordship over Crimea and North Africa. Except for Iran, the Ottomans dominated the Middle East for nearly four hundred years. The Ottoman Empire famously (and unsuccessfully) besieged Vienna in 1529 and 1683, almost breaking into central Europe.

Why was the Ottoman Empire so successful and long lived? There were many factors at work. One was its ability to work with and co-opt local rulers rather than attempting to control territory directly. But it was always strong enough to keep these local rulers in check until the 19th century. Another Ottoman strategy was the use of a military corps beholden to nobody but the state, the Janissaries. These were a group of slaves taken from Christian families and raised as soldiers. The Ottomans also built on the elaborate and successful bureaucratic practices of the Byzantines.

Although after the mid-1800s, the empire was moribund, it survived until 1923 mostly because of the desire of various European powers to keep it afloat to prevent any nation—especially Russia—from gaining an undue advantage from its collapse.