The Age of Stealth: Nuclear Bombers 70 Years after Hiroshima 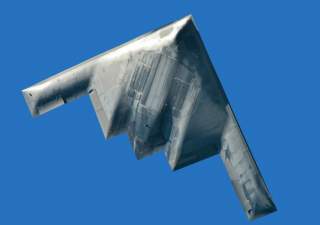 Seventy years ago today, Col. Paul Tibbets flew the Enola Gay on a mission that would change the course of world history and set the stage for the development of nuclear deterrence. The mission itself was straightforward, but the enormous scientific and industrial activity leading up to it was not. The atomic weapon, "Little Boy,” involved a massive industrial effort that is only slightly less difficult today. The development of the B-29 bomber that delivered the bomb was no simple matter either. It required an aircraft that flew higher and faster than any other aircraft could at the time.

The B-29 significantly outmatched opponents, and Japanese Zeros could only bore holes in the sky at a lower altitude as they watched American airpower pass overhead.  Even high performance follow-on aircraft to the Zero had difficulty intercepting the capable B-29.  The key to the B-29’s success was in understanding the enemy’s capabilities and crafting an aircraft capable of reducing or eliminating the Japanese ability to counter it. This understanding of an enemy’s capabilities and exploiting technology gaps continues over 70 years later with introduction of the next evolution of bomber stealth capability in the Long Range Strike Bomber, or LRS-B.

Much like it did over 70 years ago, the bomber, while often overlooked, continues to play a crucial role in the nation’s security. Not only is the yet-fielded LRS-B important for the conventional mission it will perform, but it will serve as only bombers can as an essential signaling component of deterrence and assurance.

Much ink has been spilled in the debate over the significance of the nuclear arsenal and the need to modernize aging weapons. Less has been written about the aircraft that would presumably deliver these weapons on a future mission. The LRS-B has thus far been shrouded in mystery, yet the public is assured that a contract for its production will be issued in the coming weeks.

With the process shrouded in secrecy, many Americans are left wondering: What are the features of such an aircraft? Does it have precedence? How will future missions be conducted?

While bomber technology progressed along the same basic principles from the early B-8 to the B-29 and then from the B-29 to the B-1, the guiding principle for bomber development has long been to increase altitude, range, and speed. The B-52 for example, was designed to go higher, faster, and farther than the B-36, its predecessor. Interestingly, the B-1 was designed to go fast and low to defeat enemy air defenses, which had developed to counter America's B-52 fleet.

It was always presumed that the Soviets would know we were coming, because their sophisticated radar warning network would pick up an imminent aerial invasion. Then surface-to-air missiles and fighter aircraft would be launched to destroy the invaders. In the meantime, however, a little known Soviet report on modelling radar reflections was making a splash in fighter design. The idea would lead to the revolutionary F-117, which was used to great effect in Desert Storm.

The same methodology would be used to design a stealth bomber, and suddenly the path of technological development for the air delivery of nuclear weapons entered a new age. It did so in a way completely at odds with the stealthy F-117 which, in a sense, followed the tradition of the B-29.

As with the B-29, the enemy might know the F-117 was there, but they would be essentially powerless to do anything about it. Enemy radars could not complete an intercept, because it was too difficult to find and lock on the aircraft.

The stealth bomber would take a different track, and usher in the methodology of strategic stealth. Instead of the enemy knowing the bomber was coming, the B-2 embraced "delayed detection." The idea was to delay the enemy's ability to detect the aircraft, thus preventing their surface to air missiles and fighters from ever firing on the bomber.

The entire kill chain for bringing down an invading aircraft is not as easy as the horrific shoot down of flight MH-17 might suggest. First, an aircraft must be detected, which in itself can be difficult in a high electronic stimulus environment. Once the detection is made, a track must be developed and refined to provide range, bearing, altitude, and velocity. While maintaining and refining the track, a weapon system must be assigned to destroy the adversary. Once the decision on weapon system is made, quality track data must be handed off to the surface-to-air missile or fighter. The weapon system must acquire and lock on to the incoming bomber. Finally, when the bomber is in range, the SAM or fighter can fire their weapon. This is a complicated sequence of events that stealth technology further complicates.

Some weapons are “fire and forget,” while some require the weapon system to maintain a track. Even in the low probability the bomber is detected, the crew has options to win the engagement through a series of tactical maneuvers, or by using electronic or other means to foil the shot.

Tactical stealth attacks this kill chain by taking the viewpoint, espoused by the B-29, of "kill and survive." One current representation of this viewpoint is attributed to the F-22, which is premised on the notion of "first look, first shot, first kill." Thus a tactical stealth aircraft operates at an advantage over the integrated air defense system (IADS) or other non- or less-stealthy adversaries. While killing and surviving, the enemy is aware of the presence of an intruder, but can do nothing about it.

Strategic Stealth takes the altogether different viewpoint of "survive to kill." This methodology was precipitated by an aircraft design focused on delaying detection and carrying no onboard active defenses—"detection means death." These constraints forced pilots and planners to perfect the tactics, techniques, and procedures which gave rise to the methodology of strategic stealth.

Here, the highest art form is to achieve virtual invisibility by completely denying detection. Expertise has evolved in the U.S. Air Force layer by layer. Initially it began with a focus on air defenses, but over time the methodology was expanded until it incorporated the entire route of flight beginning from point of origin. Strategic stealth proceeds from the notion of complete control of information regarding the mission.

This is exceedingly difficult if the point of origin is foreign soil. In addition, the rise of social media and generally globalized information gathering and dissemination from government and non-government actors means information about the entire route of flight must be similarly controlled.

Finally, the aircraft design ensures that the modern integrated air defense system can be dealt with in a way that ensures deception is preserved. In the most famous video demonstrating "selective attention" experiments, some amount of people always see the gorilla. What would happen, however, if the gorilla was the size of a mouse? This is the impact and effect of the stealth bomber.

To ensure that planning takes into account all possible opportunities for detection, near perfect knowledge of the stealth bomber’s radar cross section (RCS) or "signature" is a requirement. Therefore the signature must be assessed, maintained, recorded, and tracked by skilled technicians. This signature is then fed into a planning process, which determines with high accuracy the best route for delaying detection—a distinct advantage for American stealth. This same meticulous understanding of the signature is not required for tactical stealth, especially when the RCS of the adversary is orders of magnitude higher.

Due to the necessity of precise information control, the mission must be well rehearsed. Any contingencies must be considered, especially with regard to weather and fuel requirements. Mission execution must ensure sufficient information is relayed to the crew for ensuring detection is delayed. All information affecting the flight must be brought to bear to ensure all relevant data is available and assessed. Finally, this effort must be reversed along the return route.

The end result is a highly effective long-range strike capability for the United States. An aspect of that capability is its role as an effective nuclear deterrent. Since the LRS-B is also conventional, the likelihood of its demonstrated use in actual combat operations adds to its credibility in the nuclear deterrence mission in a way that no other weapon system in the nuclear triad can boast. In addition, when combined with powerful conventional weapons, like the massive ordnance penetrator, the new stealth bomber will become a convincing and powerful conventional deterrent as well.

Still, it will remain, when coupled with a nuclear weapon, the equivalent of that fateful mission in August of 1945. The bomber was key to American victory in war then and it will be central to victory in war for decades to come.