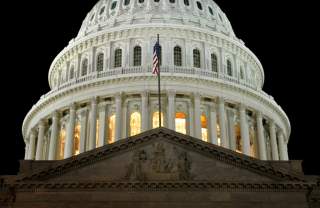 For a brief period in April, it appeared that the campaign that Democrats and neo-conservative Republicans were waging for a comprehensive investigation into the Trump campaign’s alleged collusion with the Russian government to influence the 2016 presidential election had peaked and was beginning to ebb. The Trump administration’s decision to launch missile strikes against a Syrian air base despite Russian President Vladimir Putin vehement objections to the assault on his ally, quieted accusations that Trump was Putin’s puppet. Indeed, hawks in both parties praised Trump for taking action in Syria, and the president’s supporters at Fox News and elsewhere contended that the U.S. attack discredited the notion that he was guilty of appeasing Russia.

But the hiatus in the allegations of collusion was only temporary. Worse, the resurgent anti-Russia hysteria has broader, ominous implications for U.S. foreign policy and the health of political discourse in the United States.

Congressional Democrats and their media allies have renewed their offensive in the past two weeks. Representative Maxine Waters (D-CA) even argues that the evidence already amassed seems to be enough to warrant President Trump’s impeachment. It was especially notable that no prominent Democrat denounced such an inflammatory accusation. Indeed, Democrats on the Senate Intelligence Committee appear to be escalating their concept of what constitutes a thorough investigation, now insisting that any contact by advisers to the Trump campaign with any Russian official be subject to scrutiny.

They and their neoconservative allies also insist on a laser-like focus on the alleged misdeeds of the Trump people and nothing else. The current scandal erupted full force when leaked reports from the U.S. intelligence community that newly installed National Security Adviser Michael Flynn had met with Russian ambassador Sergey Kislyak during the campaign and discussed sensitive issues, including the ongoing U.S. economic sanctions against Russia, thus apparently undermining the Obama administration’s policies.  Flynn’s action showed poor judgment, and his attempt to conceal the contact from Vice President Mike Pence, was even worse. A recent Washington Post article contends that Flynn went ahead with his meeting even though senior Trump campaign officials cautioned against it and warned him that it was almost certain that U.S. intelligence agencies were electronically monitoring Kislyak and all of his contacts.

Examining Flynn’s behavior is appropriate, but even that investigation should focus not only on his questionable Russia contacts but on the leak of the intelligence report outing him. Indeed, an intelligence official’s unmasking the identity of an American citizen in that fashion constitutes a felony. However, except for perfunctory statements from a few Democratic members of Congress that such an illegal leak also needed to be investigated, little interest has emerged in actually doing so.

The same is true of indications that President Obama’s National Security Adviser Susan Rice may have improperly targeted Trump campaign advisers for scrutiny by the intelligence agencies and illegally unmasked their identities. When Devin Nunez, the Republican chairman of the House Intelligence Committee disclosed that information and previously indicated that there was some evidence that several campaign officials may have been subjected to electronic surveillance, Democrats reacted angrily. They protested Nunez’s fitness to continue directing the House committee’s investigation, eventually forcing him to step aside. Any issue that distracted from a total focus on the alleged misdeeds of the Trump campaign was clearly unwelcome—and remains so—in such political circles.

It might be tempting to dismiss the ongoing demand for an ever more intense investigation of the “Russia connections” of Trump personnel as a mundane partisan assault. And there certainly is an element of that, as Democrats are still smarting from the biggest political upset in U.S. presidential history. Blaming the Russians for that loss salves wounded pride. Indeed, Hillary Clinton herself recently blamed Putin’s alleged interference, along with FBI Director James Comey’s decision during the final weeks of the campaign to reopen the investigation into Clinton’s e-mail problems, for her unexpected loss.

But other factors suggest that the current obsession with Russia goes far beyond partisan sour grapes. Innuendos, and sometimes outright accusations, that Trump and his advisers were dangerously soft regarding Russia policy surfaced before the election.  At one point, Clinton openly accused Trump of being “Putin’s puppet.” Moreover, even the initial focus on Flynn exhibited a distinct anti-Russian obsession. In addition to his questionable Russia dealings, Flynn had not disclosed that his firm had received more than $500,000 from the government of Turkey for promoting its interests. Failing to register as a foreign agent (which Flynn clearly was in that instance) seemed to agitate Democrats far less than his milder interactions with the Russians.

Moreover, a concerted anti-Russia campaign is also directed against scholars, journalists, and business people who have no connection with the Trump campaign or the Trump administration.  Anyone who challenges the Washington group think that an extremely hardline policy toward Moscow is necessary and desirable is vulnerable to crude smears. Princeton University professor Stephen F. Cohen, a longtime distinguished scholar regarding the Soviet Union and Russia, has had his motives impugned and his reputation sullied because he dares advocate a more conciliatory policy toward Russia. Such terms as “Putin’s American apologist” and “Putin’s pal” are routine features of the vitriol directed against Cohen.

He is hardly the only victim. Anyone who argues that Russia’s actions in Ukraine were largely a response to the West’s role in helping demonstrators overthrow the elected, pro-Russian government in Kiev, usually receives the same treatment. Targets have included Jeffrey Taylor, columnist for the Atlantic, University of Chicago Professor John Mearsheimer, conservative writer and former presidential candidate Pat Buchanan, and an assortment of journalists with a wide range of ideological orientations, such as The American Conservative’s Daniel Larison, the Intercept’s  Glenn Greenwald, and former New York Times correspondent and award-winning author Stephen Kinzer.  Epithets such as “apologists,” “stooges,” “Russian trolls,” and “useful idiots” appear frequently in hawkish attacks on these maverick foreign policy critics.

Even questioning the wisdom of NATO’s expansion to Russia’s border opens critics to vitriolic smears. An especially odious example occurred during the Senate debate on admitting Montenegro to NATO. Senator Rand Paul (R-KY) dared to object to approving the resolution making that militarily and economically insignificant microstate a treaty ally of the United States. Senator John McCain erupted at Paul for such temerity. “You are achieving the objectives of Vladimir Putin,” McCain thundered.  When Paul refused to withdraw his insistence on a floor debate and roll call vote, the Arizona Senator stated, “I repeat again, the senator from Kentucky is now working for Vladimir Putin.”

Such an outrageous accusation might have made even the infamous Senator Joseph McCarthy blush. That it came from a prominent Republican also suggests that the current bout of Russophobia is not purely a partisan phenomenon. The broader implications are extremely worrisome. A campaign appears to be underway to intimidate and silence critics of the current policy toward Russia, and even policy regarding NATO. Attempting to enshrine Washington’s group think on crucial issues is unhealthy for any democratic system. The track record on previous group think on such decisions as the military interventions in Vietnam, Iraq, and Libya also confirms that it can produce truly tragic results. Creating a similar situation of stifling debate regarding U.S. policy toward a nation armed with thousands of nuclear weapons is the essence of folly.