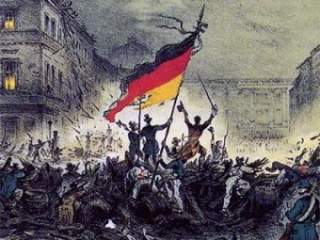 The Arab upheaval has been the cause of profound bewilderment in the developed world and among policy makers, not least in Washington. Great enthusiasm for the Arab Spring was quickly replaced by confusion and concern regarding Islamic democracy or an Islamist Winter, depending on one's perspective. This was as quickly supplanted by disconcert and despair in the face of military takeovers and ferocious civil wars. The European revolutions of 1848, the 'Spring of Nations', with their great hopes and dashed dreams, have often been cited as an analog. But indeed, what can the European experience of modernization and regime change during the nineteenth and early twentieth centuries teach us about the contemporary Arab world? History does not quite repeat itself, as differences of conditions, place and time are as significant as similarities. Still, history is the best we have got.

What makes nineteenth- and early twentieth-century Europe and the current Middle East similar is their relative position on the road to modernization. According to the most authoritative estimates, by Angus Maddison, real GDP per capita in non-oil producing Arab countries is in the same range as mid- to late-nineteenth-century Europe (roughly one-tenth of today's affluent world). Urbanization rates in Egypt and Syria are, respectively, just below and above 50 percent, a level crossed by the United Kingdom around 1850 and by Germany around 1900. Illiteracy in the major Arab countries still hovers between 20 to 30 percent (greater among women than men), again in the same range as in mid-nineteenth century Europe (with the exception of the continent's highly literate northern countries).

While these major indicators are of fundamental significance, differences remain that should also be factored in. Whereas nineteenth-century Europe and the West were the world's pioneers and world leaders in modernization, today's Arab countries are among the world's strugglers, with only Africa trailing behind. Because of this, the Arab world enjoys many of the fruits of modernization as imports from outside—in communications, household appliances, computers, medicine and the like. This also means that the Arab world is susceptible to pressures from the hegemonic developed world—most notably economic, partly military, and, more ambivalently, intellectual—even if the efficacy of such pressures is inherently limited. Finally, there are all the differences of culture and historical traditions, for, as we know, the process of modernization, while most powerful and deeply transformative, is far from being linear.

In pursuing our comparison and analysis, the following key concepts will serve as our prisms: democracy, liberalism, development, nationalism, religion, and stability.

The call for democracy has reigned supreme in the enthusiasm that surrounded the Arab Spring and the fall of the Old Regimes throughout much of the Middle East. It remains the strong expectation of Western opinion and the official demand by Western governments, most notably that of the United States. In today's West, democracy is perceived as the ultimate ideal and political norm, unconditioned by extraneous circumstances. But in reality, rather than democracy being an abstract, timeless idea waiting to be recognized and adopted by right-minded people, its successful implementation has always depended on and closely correlated with a number of developmental factors variably embedded in the process of modernization.

Thus it is anything but a coincidence that democracy on a large countrywide scale has never existed anywhere before modern times. And when it began to unfold in Europe and the West, even among countries that were turning democratic (and many countries were not), full democratization only arrived during the last decades of the nineteenth and first decades of the twentieth centuries. This was a protracted and gradual process. In France, for example, breakthroughs to democracy failed, first in 1793-5, and again in 1848-9. Democracy was only achieved with the Third Republic, from 1871-5 on, while women's suffrage was delayed until 1945. In the United Kingdom, the majority of men were given the vote only with the Third Reform Act of 1884, and the expansion and equalization of suffrage among all men and women had to wait until 1918, 1928 and 1948. Developments in the Low Countries and Scandinavia were roughly similar. Even in the United States, with its unique foundations of liberty and relatively affluent estate of free-holders, practically universal white male suffrage was only enacted in the 1820s. Women were enfranchised in 1920, and black voting, despite the post-Civil War constitutional amendments, was secured only in the 1960s. Nonetheless, there is an implicit assumption that the rest of the world should profit from our experience and wisdom, skip all intermediate phases and leap right to the end.

As Aristotle observed, the middle class is the backbone of democracy. Its growth during the nineteenth century—hand in hand with industrialization, urbanization, improved communications, increasing affluence and rising educational levels—constituted the material underpinning of democratization. True, very poor democratic countries also exist, most notably India after independence in 1947, but also a much larger number of poor developing countries that democratized after the fall of Communism and collapse of the Soviet Union. Still, other developing countries have proved highly resistant to democracy, whether for opportunistic or normative reasons. Moreover, there has always been not only an antiliberal but also a liberal apprehension of democracy. Indeed, nineteenth-century liberals were fearful of democracy, and imposed thresholds of property and education for voting, because they suspected that the masses, if enfranchised, would support neither democracy, nor liberalism, nor economic modernization. The same concerns are with us today, not least in the Arab Middle East.

The first concern is that a democratically elected government will not respect democracy. Going beyond despotism of the majority, this is popularly known as 'one man, one vote, one time'. The modern precedent is the Jacobin government during the French Revolution, which enacted universal male suffrage in 1793 but ruled dictatorially and ushered in a murderous reign of terror. Universal suffrage was abolished in the Constitution of 1795, after the fall of the Jacobins. 'One man, one vote, one time' became pretty much the norm in postcolonial Asia and Africa during the 1950s and 1960s. It is the reality in Hamas-ruled Gaza, not to mention the Fatah-ruled Palestinian Authority in the West Bank, both since 2006. Fears that Egypt’s Muslim Brotherhood might take the same path after its wins at the ballot box in 2011 and 2012 did not materialize before the overthrow of President Mohamed Morsi and the legal steps against the party in 2013. Confidence in their popular support and a reluctance to spark an open clash with their opponents and the army were variably the reasons for the Brotherhood's relative restraint during their reign in power. Their opponents, however, proved less restrained in bringing down the Brotherhood's rule by force. More than abolition of electoral procedure by the Muslim Brotherhood's government, they feared its infringement on liberal rights and values.

Liberals everywhere in nineteenth-century Europe were deeply concerned that democracy would jeopardize liberal rights, such as respect for human life, free speech, freedom of religion, toleration for a diversity of opinion and identity, and, above all, the right to property. They feared that the masses would place little value on these hard-won sociopolitical norms, or else would be swayed by nonliberal creeds, whether traditionalist-conservative or revolutionary. A new age of barbarism was their nightmare, first predicted by Edmund Burke with respect to the French Revolution, which would indeed go down that road.

The Muslim Brotherhood's reign in Egypt was too brief to offer conclusive evidence, but the omens were not very good. The Brotherhood in power were relatively restrained, for the reasons mentioned. Nonetheless, they were ideologically and politically intolerant towards the large Christian minority, the Copts, and failed to respond to widespread incidences of violence against them. They held restrictive views regarding the role of women, and wished to impose their interpretation of Islamic modesty on the public sphere. They supported the practice euphemistically known as female circumcision, already widespread in Egyptian society. And they were sure to advance the incorporation of Islamic law, the sharia, into the country's legal code as much as they felt they could get away with. It is not surprising that many in Egypt, especially in the middle- and upper-class neighborhoods of the large cities, Cairo and Alexandria, felt threatened. And as in nineteenth century Paris and other European capitals, they were strategically positioned near the centers of power to take to the streets and make their influence felt, far more so than the masses of peasantry and supporters of the Brotherhood in the countryside. In Syria, the coalition of minorities—Alawites, Christians, Druze and, partly, Kurds—that has supported and still supports the Assad regime is largely motivated by fear of the Sunni Muslim majority. This fear has only increased as the previously relatively moderate Sunni rebel movement is falling prey to militant Islamist and jihadist groups.

Western opinion and policy makers wish to see democracy installed and maintained, while also wishing that liberal values and norms be protected. They naturally tend to regard democracy and liberalism as inseparable, as the two have become in liberal democracies during the twentieth century. However, when the two sets of cherished values and norms conflict, which of them is to be given precedent? This question has long been absent from the script of Western and liberal democratic discourse. Moreover, liberal parliamentary regimes that were not democratic but later grew to become fully so were very much the norm in nineteenth-century Europe. But their opposite, the recently posited concept of 'illiberal democracy', has rarely if ever materialized anywhere. The reason for this is that liberal values seem to be essential for a deep respect for a democratic system, as opposed to an opportunistic or instrumental attitude towards it. Illiberal democracies do not only infringe on liberal values and norms, but are also ever in danger of turning undemocratic too.