The Armenian Genocide and Beyond: The Road to Deir al-Zor 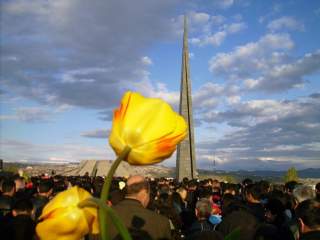 THIS YEAR, Turkey moved its Gallipoli anniversary commemoration, traditionally marked on April 25—the day the Allies landed on the peninsula just west of Istanbul—to April 24. April 24, of course, is the day on which Armenians around the world have traditionally commemorated the slaughter of their forefathers by the Ottoman Turkish government. That day, in 1915, the police in Constantinople rounded up some 250 Armenian leaders for deportation and death. This act was followed by systematic mass deportations and massacres.

This year was the centenary of both World War I events. President Recep Tayyip Erdogan, with his wonted crudity and cynicism, moved the Gallipoli remembrance by a day in order to overshadow the Armenian commemoration and divert international attention away from the Turks’ crime against humanity, considered by most historians to be the first genocide of the twentieth century.

All Turkish governments since World War I have denied Turkish responsibility for the mass murder and, indeed, have usually denied that it actually took place, explaining that a much smaller number of Armenians had died (much, incidentally, as Mahmoud Abbas, the Palestinian “president,” in his PhD thesis claimed that “only” several hundred thousand Jews had died during the Holocaust). Instead, Turkish governments have claimed that the Armenians, a disloyal people, had rebelled against the country and tried to stab it in the back during the war; that the Armenian victims were the result of clashes between armed rebels and the empire’s security forces; and that, if massacres occurred, they were the doing of overzealous local officials and/or Kurdish tribesmen, rather than a product of the policy of the central government, which had merely ordered the removal of Armenians from war zones.

Few, if any, of the foreign dignitaries who attended Erdogan’s festivities at Gallipoli, including princes Charles and Harry from Great Britain and the prime ministers of Australia and New Zealand, whose troops had participated in the landings on the peninsula, were probably aware of the grim irony that undercut the Turkish celebrations. This irony was embodied in the story, in which Gallipoli and the genocide intersect, of Captain Sarkis Torossian. His war memoir, From Dardanelles to Palestine, which had originally appeared back in Boston in 1947, was now available in Turkish, published in 2013 and edited by a Turk, Professor Ayhan Aktar of Istanbul’s Bilgi University.

Torossian was an Armenian from Everek, near Kayseri, who, unusually for an Armenian, managed to enroll in and graduate from Turkey’s military academy just before World War I. In 1915 he was stationed at Gallipoli, where he commanded artillery that badly mauled the British fleet in the Dardanelles. For his service, he was personally awarded the Ottoman State War Medal by Enver Pasha, the Ottoman war minister who, alongside Talaat Pasha, the interior minister, was one of the main architects of the Armenian genocide. During the following months, Torossian appealed to Enver to intercede and save his family. (Officially, close relatives of Armenian officers were supposed to be spared though, in fact, many were deported and killed.) Torossian’s father and mother were among those murdered, and his sister Bayzar and fiancée, Jemileh, both died of disease in the Syrian deserts (as did hundreds of thousands of Armenian women and children during the forced treks southward or in the concentration camps around Deir al-Zor). Jemileh, incidentally, was, it appears, an Armenian who had been found wandering near her home at the age of two and had been “adopted” by an Ottoman Arab general during the earlier major bout of Turkish massacres of Armenians, in 1894–1896, and had been brought up as a Muslim. Later, in 1918, Torossian, understandably embittered, switched sides and deserted to the British army during General Edmund Allenby’s conquest of northern Palestine. He subsequently served in an Armenian unit in the French Army during the Franco-Turkish hostilities in Cilicia. He emerged from his military career with a fistful of Ottoman, British and French medals.

What Torossian’s story shows is that Christian soldiers, when allowed to, fought in the Ottoman Army against the Allies in World War I (though almost all the Armenian soldiers, shortly after the war began, were disarmed and immediately murdered by the Turks or assigned to grueling labor battalions, where they were eventually murdered or died, by design, of exposure, malnutrition and disease). This story also shows that Armenians like Torossian had good—indeed, excellent—reasons to turn coat after 1915–1916.

(A caveat: Recently, serious doubts have been raised about the authenticity of the Ottoman documents quoted in Torossian’s memoir. Given the persisting denial of access to researchers to the documentation in Turkey’s military archive there is no way to reach closure in this matter. Nevertheless, the essential point of the Torossian story remains cogent—that a large number of Christians served in the Ottoman army in World War I while the empire was busy murdering their relatives, close and distant.)

But, of course, by the start of World War I there were already many Armenians who were disaffected with the empire. After all, during 1894–1896 the Turks and their Kurdish helpers had massacred at least one hundred thousand Armenians. In 1915–1916, a very small minority in a handful of places (such as Zeitoun and Van) actually took up arms against the government, mainly to avert massacre, which almost all felt was coming.

It is unclear how many Armenians lived in the empire on the eve of World War I. Ottoman official figures spoke of some 1.2 million; Armenian sources put the number as high as 2 million. Armenians have traditionally claimed that the Turks and their Kurdish, Azeri, Chechen, Circassian and Lazi helpers murdered as many as 1.5 million Armenians during the war. The current generation of historians, including Armenian historians, believe the true figure is closer to 600,000–800,000 dead. For example, historian Raymond Kévorkian, in his book The Armenian Genocide, says that the number who “perished exceeded 600,000” by the end of 1916. But many more died—murdered, or from starvation and disease—during the following years. For example, in early 1918, between Amman and Salt in Transjordan, Turks or Circassians slaughtered “253” Armenian men women and children. They all “had their throats cut, except some babies who had been stamped on.”

ALMOST ALL are agreed that what happened was “genocide”—meaning that the Turks, who ruled the empire, intended and tried to exterminate the Armenian people who were under their control, and that this physical extermination was accompanied by cultural-religious destruction through forced conversion, mainly of women and children, to Islam; mass rape (in part designed to produce “Muslim” babies in place of Christian babies); and the destruction of the Armenian school system and intellectual and clerical elites (“cultural genocide”). Armenian clerics in each community, Gregorian, Catholic and Protestant, were usually put to death first, often after abominable torture (the plucking out of eyes, dismemberment, crucifixion, etc.).

During the past thirty years, using Western, Russian, Turkish and Armenian documentation, historians—many of them Armenian—have published a succession of studies that demonstrate beyond a shadow of doubt that the extermination of the Armenians was what the Young Turk rulers in Constantinople and the military and political authorities in the provinces intended, and what indeed transpired. The most prominent writers in the field have been Richard Hovannisian (Armenia on the Road to Independence, 1918), Vahakn Dadrian (The History of the Armenian Genocide and Warrant for Genocide), Taner Akçam (A Shameful Act and The Young Turks’ Crime Against Humanity), Raymond Kévorkian (The Armenian Genocide) and Donald Bloxham (The Great Game of Genocide). Kévorkian’s encyclopedic, detailed description of what happened (running to more than a thousand densely packed pages), province by province, week by week, is something even a veteran SS man might find stomach-turning.

Historians around the world are still unraveling what happened in different vilayets (provinces) and sanjaks (districts)—for example the Phnom Penh–based Hilmar Kaiser’s recent The Extermination of Armenians in the Diarbekir Region. But the past and current generations of historians have not left many stones unturned when dealing with the comprehensive, national level. Nonetheless, the hundredth anniversary of the genocide has seen the publication of a spate of books on Armenian-Turkish relations. Some of them have focused on 1915–1916; a few have widened their scope to cover the evolution of those relations during the following decades; at least one has embedded the story of the genocide within the wider framework of Ottoman war-making during World War I.

RONALD GRIGOR SUNY’S “They Can Live in the Desert but Nowhere Else”: A History of the Armenian Genocide offers the reader a good survey of what happened, perspicacious analysis and interesting discussions about the genocide’s causal roots and the historiography of the genocide and its deniers (though the book, annoyingly, lacks a proper bibliography). Suny’s book also contains good introductory chapters on the Armenians in the Ottoman Empire and the rise of Armenian nationalism. But the study is a summary of the existing historiography; it offers next to nothing new in terms of research based on archival documentation. Indeed, all or almost all quotations are culled from existing works.