The Arrival of the Female Four-Stars 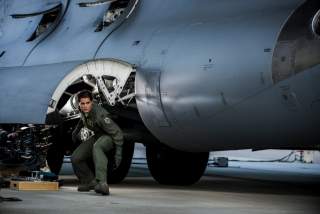 Only six years after an Army officer, General Ann Dunwoody, became the first woman in U.S. history ever to attain the rank of four-star general, the nation’s armed forces will soon appoint its third woman serving with four stars, the highest rank in the land. While this welcome news should be celebrated, it must not be misinterpreted to announce the elimination of the institutional barriers women face in the military. Just because the glass ceiling has broken doesn’t mean the ladder is any easier to climb.

The U.S. Senate recently confirmed General Lori Robinson of the U.S. Air Force as commander of all American air forces in the Pacific theater. In October, she will assume responsibility of the geographic area with jurisdiction over China, India, Korea, Japan, parts of the Indian Ocean and all of the north and south Pacific Ocean—thirty-six countries, 3.5 billion people and over 52 percent of the world’s atmosphere.

More importantly, this region is also home to several of the world’s largest militaries, at least eight close U.S. security partners, and a diplomatic and defense rebalancing indicative of its importance to U.S. interests. And this is what makes this appointment such an accomplishment: General Robinson will become the highest-ranking woman in American military history with a forward-stationed zone of combat responsibility.

As expected, General Robinson’s resume is impressive: she is trained as an Air Battle Manager, responsible for directing combat aircraft in battle, graduated from and instructed at the Air Force’s Fighter Weapons School, and commanded at several levels. But she is, of course, far from the only woman in the American military with a combat pedigree. Women make up almost 15 percent of the armed forces, have suffered about 150 fatalities in the wars since 9/11, and have made invaluable contributions throughout the battlefield. General Robinson joins fellow female four-stars Navy Admiral Michelle Howard and Air Force General Janet Wolfenbarger (General Ann Dunwoody is retired) at the very top of the military’s senior leadership ladder.

Three women currently serving with four stars, and one in position to lead combat forces, is major progress. Yet these accomplishments are far from enough—women still hold less than 8 percent of the four-star positions in the nation’s armed forces. And there is no guarantee they will do even that well in the future. First, these women represent the initial generation of women to gain entry to the armed services. This leading-edge status carries with it a bright spotlight: both proponents and detractors focused laser-like attention on their careers. Such investment can offer both the benefits of sponsorship and drawbacks of scrutiny that subsequent women are unlikely to experience.

Further, there is still a need for cultural change in many parts of the U.S. military. Both female and minority leaders may be hesitant to sponsor junior service members of the same minority status, worried about allegations of favoritism. And senior male officers may also shy away from hiring young women with whom they must work long hours or travel due to concerns about perception.

Indeed, the ranks of female officers following these superstars are thin: the July 2014 Air Force Brigadier General (one-star) board selected zero women, for example. Overall exit rates for female officers across the services are roughly double those of men. Since fewer women join the military in the first place, lower retention rates mean women comprise a steadily decreasing proportion of the pool of candidates for promotion. According to the 2013 Air Force Officer Diversity numbers, women represent almost 23 percent of Second Lieutenants but shrink to only 12 percent of Colonels and less than 7 percent of three-stars.

The reasons behind low retention and promotion rates are difficult to pin down, and many point to cultural dynamics that induce women to leave. But recent work focusing on the Air Force identifies structural impediments to female-officer retention and promotion. Military service is still largely predicated on a 1950s family model that relies on a stay-at-home, portable spouse to free the military member to navigate demanding career checklists required for promotion. Few military women have such spouses, and they face the same disproportionate burden of housework and child-rearing as their civilian counterparts. This combination often leads them to suboptimize their career path with less-promotable assignments. Faced with the up-or-out promotion system that requires women to compete against their (mostly) male counterparts and a binary choice to stay or go, many women voluntarily or involuntarily leave service.

There is good news. First, senior military leaders have recognized this dilemma and are taking steps to rectify it. In the Air Force, both Air Force Chief of Staff General Mark Welsh and Secretary Deborah James have identified women’s retention and promotion as a priority and are committed to addressing the issue. The Air Force has also recently joined the Navy in opening a sabbatical program (termed the Career Intermission Pilot Program) for both women and men to briefly break from service for education or family reasons. The program is a trial run for broader opportunities for more flexible military-service options to enhance talent retention.

And of course, service leaders are promoting deserving women to top leadership billets. Four-stars Robinson, Howard, Wolfenbarger and Dunwoody not only inspire other women to achieve success, but actively change cultural expectations and norms inside our military. Perhaps even more importantly, their competence and professionalism help normalize the deep and pervasive presence of women on the front lines of national defense.

Miriam Krieger is a Pre-Doctoral Fellow at the Brookings Institution and officer in the US Air Force; these views are her own and do not reflect those of the Air Force.