From the Ashes of Iraq: Mesopotamia Rises Again 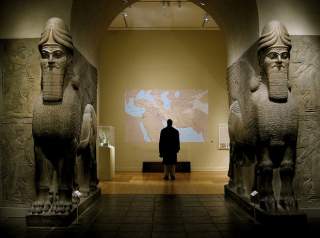 The dissolution of the colonial creation named "Iraq" is now almost complete. Perhaps what comes next is a return to the past; not a brutal Islamic “caliphate,” but something more basic.

Today, Mesopotamia is reappearing. The term is a Greek word meaning “the land between the two rivers.” The Tigris and Euphrates Rivers are the defining features, each arising in mountains far to the north of Baghdad. The rivers and their annual floods defined the landscape, the cycle of life and the worldview of civilizations. The deserts to the west and the mountains to the east and far north provided rough boundaries and were liminal spaces related to the center, but yet separate and apart, sunbaked and dangerous. Inside Mesopotamia was a cauldron.

From the Sumerians of the third millennium BCE through the Assyrian and Babylonian civilizations of the second and first millennia BCE, to the Abbasids of the eighth century CE and until the arrival of the British in the early twentieth century, the space called Mesopotamia was the container for civilizations that rose and collapsed. Cultures invented writing and built the first cities, growing and shrinking in response to changing river courses and global climate. They conquered and were conquered, traded with surrounding regions, and formed a baggy but recognizable whole—what we call Mesopotamian civilization.

Internal distinctions were paramount. Babylonia in the south was dominated by the rivers and the annual flood, irrigation agriculture and seemingly unrelenting heat and mud. Assyria in the northern, rain-fed zone sat amidst undulating plains and foothills. Culturally, Babylonia was older and more developed, the “heartland of cities” going back to 4000 BCE, a primacy that Assyria acknowledged even in periods when they dominated the south. By and large, both shared the same deities and myths, the same aggressive tendencies, and the same fear and loathing of surrounding regions. But competition, warfare and repression were constant.

For inhabitants, that is to say the kings and priests whose thoughts we read on clay tablets many millennia later, Mesopotamia the whole, a unity of north and south, was an ideal—the supreme prize, something overseen by the gods—to be aspired to and claimed by quotidian rulers. But, much like the idea of “Iraq,” it was conceptual, rather than practical. The south often dominated the north and vice versa, but never for very long.

Then, as now, the neighbors were a problem. One historical parallel seems especially apposite today. The Third Dynasty of Ur was short-lived, existing from around 2212 to 2004 BCE. It arose in southern Mesopotamia after the fall of the Semitic Akkadian Empire and revived the culture of the original or dominant southern ethnic group, the Sumerians. This dynasty created a fanatically integrated state, where temples, palaces and estates spun elaborate networks of supply and whose record keeping was unprecedented. As a territorial state, it was not far-flung; its core area extended only from modern Baghdad south to the Arabian Gulf, but it briefly reached into Iran and Assyria.

Toward the end of the dynasty, however, ruler Su-Sin faced a growing threat, the Amorites. These Semitic-speaking peoples arose somewhere on the middle stretches of the Euphrates River and surrounding steppe-lands in what is, for now, called Syria. Amorites were regarded with contempt and fear by the neo-Sumerians. It was said they did not cultivate grain, nor did they cook their meat. They did not even bury their dead.

Whether this terrifying image was correct or was something cultivated by Ur III scribes, Amorites themselves, or both is unknown. But Su-Sin’s response was to build a wall—the “wall against the Martu,” perhaps 280 kilometers in length—to keep the Amorites out. It didn’t work, any better than other walls in antiquity designed to keep barbarians out. The Ur III dynasty collapsed and was followed by centuries of conflict between various dynasties.

Eventually, the Amorites took control, their most famous scion being Hammurabi of Babylon. Like all Mesopotamian dynasties before and since, it was necessary to connect with the greater Mesopotamian tradition; Hammurabi’s lineage was crafted to show he descended from ancient kings and was the restorer of justice. Hammurabi’s famous “law code” described him as the pious defender of widows and orphans, when in fact he was their maker. No surprise that Saddam Hussein was often depicted with Hammurabi and with Nebuchadnezzar, destroyer of the temple in Jerusalem. Similarly, ISIS’ claims to the Islamic “caliphate,” to the restoration of glory and piety can be viewed through the same lens. In Mesopotamia, the past is always charter.

As concession to divisive reality, the Ottoman Turks had ruled Mesopotamia with three administrative units, in which a bewildering assortment of ethnic groups coexisted uncomfortably. About the Sunni-dominated state created by Britain, their “Iraq,” a revived medieval term, little more need be said. The claptrap monarchy they invented gave way to a repressive and then tyrannical “republic.” As it happened, America disposed of Saddam Hussein, although the Arab Spring may have done the same. In a historical irony, an act of imperialist intervention thus undid a previous one.

So it is as well with Syria, now divided into warring territories along lines familiar three thousand years ago. Many, especially ISIS itself, pointed to the vehement erasure of the so-called “Sykes-Picot” line, the 1916 boundary between British and French spheres of influence, from which the borders of Iraq and Syria were drawn. ISIS even bulldozed the berm that marked this mostly arbitrary line.

The symbolism of Sykes-Picot in the minds of Westerners and Islamists alike is telling, if nothing else, of the psychological impact of the last century. Their borders, drawn with thick pencils on imprecise maps, looked to the future, to a Middle East under Western domination. Iraq, and Syria, created holes where none existed.

Iraq has fractured along traditional lines; Kurdistan in the north, the Sunni regions around Baghdad and west toward the Euphrates and the Shiite regions of the south. These correspond roughly to Assyria and Babylonia, and the swing zones in the middle over which they fought endlessly. Hordes more terrifying than the Amorites—judging from their tweets of mass murder and crucifixion—rush in from the west while Persia struggles to defend its Shiite vassal state in Baghdad.

More of what is old is new again. ISIS threatens the Haditha Dam on the Euphrates, which if destroyed, would unleash catastrophic floods, much as the Assyrian king Sargon II did in 710 BCE against rebellious Babylonian ruler Merodach-Baladan. Cutting off the water supply, as ISIS did when it captured the Fallujah Dam earlier this year, is an even more ancient tactic; the cities of Lagash and Umma had fought a water war around 2500 BCE.

Ethnic cleansing and mass slaughter, proud announcement of the mutilation and execution of captives as nearly religious expressions of power, arbitrary decisions to provision or starve captive populations—all these are ancient Mesopotamian patterns of conflict. Only the destruction of Islamic religious buildings and sites by ISIS is truly new; Mesopotamian dynasties were fastidious about maintaining or restoring the cults and temples of conquered city-gods, even though the gods’ statues might “choose” to dwell in the conqueror’s city.

Geography is the container for cultures and helps create their possibilities and limits. Iraq was always a figment, as well as an ideal held by people who, for a few decades following the European style, thought of themselves as a nation-state. But underlying dynamics have proven stronger, and Iraq is no more. The ancient cauldron returns and decades of warring tribes and dynasties likely await.

Alex Joffe is editor of The Ancient Near East Today, the monthly e-newsletter of the American Schools of Oriental Research. He is also a Shillman-Ginsburg Fellow at the Middle East Forum.