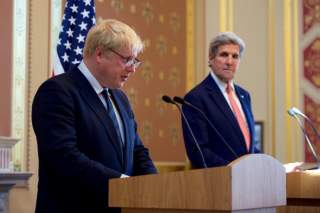 THE UNITED STATES and Europe have a blind date with history. By 2020, decisions made about the alliance of purpose and the union of necessity built during the Cold War will leave each either more united and stronger, or more divided and weaker. In June 2016, a referendum in Britain changed the terms of its relations with the European Union, but it may also have reactivated its indispensability to its member states, and even strengthened the role of NATO as a unifying factor with the United States. Now, the thirty-four members of NATO and the EU (including twenty states, not including Britain, that belong to both) need a Transatlantic Strategic Dialogue to share strategic foresight and provide policy input for a world of increasing complexity and permanent crises.

In all instances, the aim is to achieve a complementarity of action: even when the transatlantic partners do not act together on every issue, they can still make sure that together they act on all issues that shape the battle of ideas no less than the battlefield. If not America with Europe, with whom? If not Europe as a union, how? If not the EU and NATO, what? And if not now, when?

“Foreigners are not like the folks I’m used to,” Lyndon B. Johnson reportedly said. If asked, he might have added that the Europeans came closest to the folks he knew. Yet, this special affinity is ending. This is a demographic fact of life, which is unlikely to be reversed. Consider: As recently as 1965, 84 percent of all Americans were non-Hispanic whites; by 2015, that share had declined to 62 percent, with the Hispanic share rising from 4 to 18 percent while the Asian share rose from less than 1 to 6 percent. Now, non-Hispanic whites are projected to fall to 46 percent by 2065, with the Hispanic share of the population rising to 24 percent, and the Asian share to 14 percent, while the African American share will remain steady at about 13 percent. These trends suggest a post-American America whose world map is moving away from the Atlantic basin, which is where America was born, down to Latin America where it used to dominate and across the Pacific where it has been drifting.

Such a cultural separation, which also involves a significant demographic shift of Europe southward, makes it all the more important to move toward some transatlantic institutional finality—meaning a better understanding of the modalities that will govern the terms of transatlantic and intra-European relations. But now, instead, the EU is fading and NATO looks stale, with the latter arguably the least influential it has been since 1949 and with the EU visibly more troubled than at any time since the Maastricht Treaty in December 1991. For Britain to say “No” to Brexit would not have been enough to reverse either condition. But for Britain to have said “Yes” leaves Europe historically disfigured and geographically dismembered—a post-Atlantic Europe that moves America away and brings Russia closer, while making Germany more dominant and the EU less important.

THE CONSTRUCTION of Europe as “an ever-closer union” is often told as a fairy tale, including a happy ending. But it was written as a complex tale of treaties fraught with ambiguities and contradictions that made the recurrence of institutional crises inevitable. For the process to go on as it did, four conditions had to be met: first, robust and evenly shared economic growth to sustain a permissive consensus in all member states; second, stable and confident centrist national leaderships, whether left- or right-leaning; third, regional security, threatened in the east during the Cold War and in the south since September 11, 2001 especially; and fourth, a bi- or multinational locomotive to help keep the process moving after the United States had gotten it started during the first postwar decade.

As a whole, these conditions do not exist today. National borders are being closed again, the single currency is at risk, prosperity is receding as growth stagnates and unemployment remains high. Inequalities between the EU member states are widening, intra-EU bilateral relations are tense, the case for solidarity is shattered, democratic politics is under assault and security is at risk. Local and global anxieties reflect widely shared premonitions of impending disasters that the EU seems unable to deter or manage. In short, the idea of Europe has turned into a contentious issue as its citizens disagree over what the EU is, debate what it does, ignore what it has achieved and differ over what it should do next—all with self-defeating populist, anti-EU tones that raise the risks of institutional rollback. Predictably enough, this is cause for apprehension in the United States, whose interest in an ever-closer and bigger Europe now seems stronger than many EU members.

What next, then, for 2020? Brexit has made at least one thing clear: “muddling through” one crisis at a time with barely enough economic growth to permit incremental gains that mask a steady rise of public skepticism is not an option. Given the state of the union and the lack of unity within each state, inaction would be a choice for more regression and fragmentation. At half past the 2010s, three paths remain open, each with a chance to succeed but all vitiated by weaknesses.

A first path to 2020 would end the institutional logic of an ever-closer union (bigger is better, deeper is smarter and stronger is safer) and would instead follow a logic of cleavage (smaller is wiser, lesser is better and weaker is cheaper). Europe, in this scenario, would fragment into old-fashioned clusters of states to stop the refugees where the Habsburg Empire used to prevail, or to contain Russia east of the former Warsaw Pact members, or to return to Europe’s starting core of six states plus a very few, if willing and as needed. Admittedly, anticipating the regression and rollback of the EU is hardly new; but that it would no longer be limited to professional Euroskeptics reflects an unprecedented depth of concern over the fissures that have appeared during the past few years. While a clear majority of EU citizens still welcomes membership (71 percent approval), a nearly equal number objects to its policies and methods (72 percent), which leaves the EU increasingly vulnerable to the next crisis, meaning more Brexits and less Europe.

A second path would extend Germany’s unipolar moment in Europe at least to 2020. However, with sluggish and uneven EU-wide economic growth—1.5 percent or less—an austerity-conscious Germany that outperforms its partners would remain economically depressing and politically oppressive, thus increasing the resentment of a number of EU members about German leadership (now at 53 percent for, and 47 percent against) and deepening Berlin’s ambivalence about the burdens of EU membership. This is not just about Germany as Europe’s problem; it is also about Europe as Germany’s problem.

In a climate of strategic retrenchment, welcomed by Germany, and economic nationalism, favored by many EU members, the Transatlantic Trade and Investment Partnership (TTIP) would likely be stalled and eventually abandoned by an increasingly indifferent U.S. Congress and hostile national parliaments in Europe. Even with reduced refugee flows and no immediate prospect for another round of enlargement, anti-EU populist pressures would remain high, inducing more calls for a renationalization of, or opt-out from, some EU policies, notwithstanding feeble German attempts to steer the union away from institutional shrinkage and “save” the EU from itself and its citizens. Already, Germany’s political restlessness, demographic pressures and vulnerability to a sluggish world economy may be too difficult to overcome for its hegemonic role to last much beyond the end of the decade anyway—with or without a weakened Angela Merkel, but above all with no reliable alternative members able or willing to lead the EU.

A third path to 2020 would gradually reset Europe. With Brexit acting as a wake-up call, Europe’s institutional rebalance would be conceived one issue at a time around a political “new deal” that would follow a cycle of national elections—including France and Germany in 2017 after new elections in Britain would also have reorganized its relations with the union. (Remember the political turnover that shaped the Western pivot of the years 1979–83, from Margaret Thatcher and Ronald Reagan to François Mitterrand and Helmut Kohl?) A more prosperous global economy, buoyed by surging American and Chinese markets, would permit stronger and more evenly distributed gains among EU members. With a motivated new U.S. administration and stronger European governments, TTIP, including Britain and possibly other European members of NATO that are not EU members, could move forward and help to unleash the full potential of the transatlantic economy for a genuine transatlantic marketplace by 2025.

Entering a new decade, negotiations for further EU enlargement would also gain momentum, and improved conditions in the Middle East would reduce the flows of refugees and, together with better economic conditions, help abate populist pressures. With the gradual erosion of Germany’s unipolar moment, a wider leadership for the EU would facilitate the institutional reforms needed for what used to be known as Europe’s “finality,” as well as reset EU relations with a fading Russia and insist on a more active role elsewhere.