The Attack on Charlie Hebdo: A Warning to Europe Written in Blood 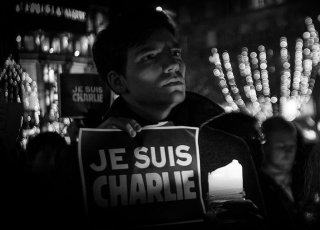 The hideous attack on Charlie Hebdo, the Parisian satirical weekly, was not just an assault on France, which has gone into lockdown mode as it searches for the gunmen who murdered twelve journalists. It was also a warning to the rest of Europe, which has been grappling with its growing Muslim population. The latest issue of Hebdo itself featured an illustration about the new novel called Submission by the professional provocateur Michel Houellebecq that is set in 2022 and that depicts a France governed by an Islamic president who bans women from working.

The blunt fact is that Europe has a Muslim problem because radical Muslims have a problem with it. They are following a Leninist strategy of attempting to heighten the contradictions between Western values and Islamic ones. They also happen, more often than not, to be anti-Semitic. Writing in the Independent, Jonathan Fenby says:

As Yonathan Arfi, Vice-President of the main Jewish organisation, CRIF, noted, anti-Semitism had become “a portmanteau for a lot of angry people; radical Muslims, alienated youths from immigrant families, the far right, the far left” amid a “a process of normalisation by which anti-Semitism is being made somehow acceptable.” The French office of the Jewish Agency for Israel reported that the “climate of anti-Semitism” had led more immigrants to Israel in the first eight months of 2014 than from any other country.

In Germany, France and Great Britain, the attacks are likely to strengthen anti-immigrant parties. The question facing European leaders—German chancellor Angela Merkel is meeting British prime minister David Cameron today—is whether they can move to co-opt and defuse nationalist passions. Until now, they have often taken refuge in banalities and homilies.

Confronting the plague of Islamic radicalism, which has been greatly inflamed by the fighting in Syria and the rise of ISIS, is imperative. The Islamic threat may have the effect of forcing European leaders to work together more closely rather than feud with each other, as is often their wont. Already, Russian revanchism in Ukraine has inadvertently helped to revive a moribund NATO—had the Kremlin simply waited another year before annexing Crimea, NATO would by then likely have degenerated into a complete state of collapse. Now, Islamic radicalism could animate European leaders to seek further common ground in intelligence and educational efforts to combat terrorism. If it takes a threat to forge unity, then Europe has found it.

For now, however, the most immediate political beneficiary is Marine Le Pen, the daughter of Jean-Marie Le Pen and the leader of the Front National party, which has long agitated against foreigners. France has experienced a rash of terrorist violence, including the use of cars to attack festive celebrations. French president Francois Hollande will come under increasing pressure to show that he can effectively combat terrorism. He has vowed to capture the gunmen; it needs to happen quickly. But the broader problem Hollande will confront is the mounting tension between Muslim radicalism and French society. Add in an economy in the doldrums and you have a recipe for further trouble.

In Germany, the nationalist Alternative Party, which is to the right of the Christian Democrats led by chancellor Angela Merkel, may see an uptick in support. Already, weekly demonstrations called by Pegida against Muslim immigration are taking place in Dresden—the center of the uprising against the former communist regime—and 18,000 people showed up this past Monday. Chancellor Merkel has condemned the rallies. Her condemnation has been ignored.

The Alternative Party does not sponsor the rallies, though some of its leaders have attended them. It focuses on calling for an exit from the European Union, but it is hostile to the institution and is anti-Euro. It won 14 percent of the vote in state elections in Thuringia and 10 percent in Brandenburg this past September. The collapse of the centrist libertarian Free Democratic Party in the last federal elections has opened the door for the Alternative Party to replace it. It is eroding the long-standing taboo against German nationalism.

And in Great Britain, where radical Islam has long been a potent problem, UKIP may win more legitimacy for its warnings about the untoward effects of immigration. Cameron has been under steady pressure from UKIP. With elections looming in May, Cameron is under intense pressure over Britain’s status in the EU and government benefits to immigrants.

With its proximity to the Middle East, Europe is the locus of efforts to target terrorism at the West. It was no accident that the 9/11 plot was hatched in Hamburg. But it is Europe that has seen the most consistent efforts by Islamic militants to target its institutions and populations, whether it is in Spain, Germany, the Netherlands or Great Britain. Now is no time—to borrow a phrase from former British prime minister Margaret Thatcher—to go wobbly.