The Balkans Suffer for the EU's Refugee Mistakes 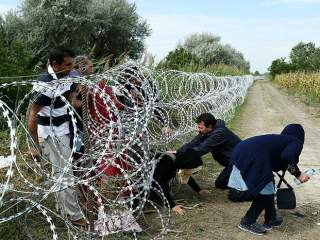 The Balkans are burning. Europe’s refugee crisis has now entwined with the general crisis of governance afflicting the Balkans, and reached its apogee in Macedonia.

Between April 13 and 14, Macedonian rioters burned the presidential office and destroyed the building housing the country’s Ministry of Justice because the president had pardoned people involved in a 2015 wiretapping scandal. Just days earlier, on April 10, Greek police had bussed refugees to the Macedonian border, telling them that they could cross within an hour. Groups of up to five hundred men subsequently stormed the border, and thereafter clashed with Macedonian police.

Thus Macedonia, a pro-Western state that has made remarkable advances in health care and economic growth, and which successfully processed one million refugees last year (half of its total population), now faces anarchy at the worst possible time. Moreover, leftist opinion in the European Union blames the Macedonian government for allegedly undemocratic behavior, and is making threats against it.

But Macedonia is not alone. The massive human tragedy of Muslim refugees, who are now being deported from the Balkans back to Turkey because Europe cannot and will not accept them, along with the recent terror attacks in Brussels, underscore Europe’s twin failures of counterterrorism and assimilation.

A tidal wave of Muslim refugees fleeing failing states and civil wars throughout the Middle East will soon overwhelm Europe. The BBC reports that over a million refugees entered Europe in 2015, and that over 135,000 did so between January and February of this year alone.

To date, Europe’s response to this trend has been woefully inadequate. As part of a recent agreement with Turkey, the EU agreed to take control of the problem and stop the smuggling of refugees into Europe by returning (i.e., deporting) new arrivals to Turkey, which will then process them and allow some of them to move to Europe in return for a substantial EU financial package. Yet while this deal may reduce smuggling, the problem continues to fester because European countries refuse to fulfill previously accepted immigrant quotas. Eastern European states are even more adamant about refusing refugees.

Consequently, the Balkan states, among the poorest in Europe, now face the burden of processing the refugees on their own, without EU support and in the face of denunciations from Brussels for alleged "democracy deficits.”

Such a stance is shortsighted in the extreme. Historically, every major Balkan crisis inevitably became a crisis of the European state system. World War I was the worst such incident, but Yugoslavia’s collapse in the 1990s also triggered a pan-European crisis. Stability in the Balkans, in other words, is paramount to the same in the Eurozone.

It stands to reason that the United States and EU need to formulate stronger policies to help these countries meet the refugee challenge. Invoking their democratic deficits is, in this context, a smokescreen for inaction—one which deeply hurts European security.

A European Union that can compensate Turkey for its role in mitigating refugee flows can certainly afford the material and reputational costs of helping Serbia and Macedonia confront their respective refugee and governance crises. Such a contribution would be a preventive investment in security, and one that is sure to cost less than the price of the inevitable crisis in the Balkans that will arise if nothing is done. For while the deal with Turkey may help Europe regain control over the immigration process, excluding the Balkan states from it will ensure its ultimate failure.

Stephen Blank is a senior fellow at the American Foreign Policy Council in Washington, DC.