The Baltimore Riots: Could Larry Hogan Pull a Spiro Agnew? 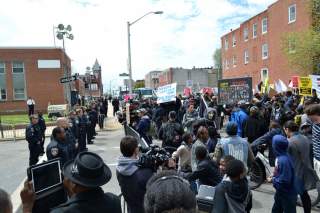 Larry Hogan is only the second Republican governor of Maryland since Spiro Agnew. Agnew's handling of the last major rioting in Baltimore back in 1968 propelled him to the vice presidency of the United States.

Agnew was actually elected in 1966 as a pro–civil rights Republican. He supported an open housing law for Maryland that would have banned racial discrimination. His Democratic opponent was against it, campaigning on the slogan "Your home is your castle."

Richard Nixon agreed with Agnew. In fact, he lumped Agnew's opponent together with George Wallace and Lester Maddox as representatives of the dying segregationist wing of the Democratic Party. Nixon wrote in the Washington Post that "Maddox, [George] Mahoney and Wallace" would "squeeze the last ounces of political juice from the rotting fruit of racial injustice."

But what really impressed Nixon was what Agnew did when Baltimore was torn asunder by riots in the aftermath of Martin Luther King, Jr.'s assassination. Agnew sent in thousands of National Guard troops and hundreds of state police to put down the violence, arresting some 5,800 people.

Agnew also summoned top civil-rights leaders in Maryland to meet with him. His remarks were anything but conciliatory. "I did not ask you here to recount previous deprivations, or to hear me enumerate prior attempts to correct them," he said. "I did not request your presence to bid for peace with the public dollar."

The governor challenged the black leaders present to denounce radicals like Stokely Carmichael, who had only recently visited Baltimore. "It is deplorable and a sign of sickness in our society that the lunatic fringes of the black and white communities speak with wide publicity while we, the moderates, remain continuously mute," Agnew said. "I cannot believe that the only alternative to white racism is black racism. Somewhere the objectives of the civil rights movement have been obscured in a surge of emotional oversimplification."

"Tell me one constructive achievement that has flowed from the madness of the twin priests of violence, Stokely Carmichael and Rap Brown," he continued. "They do not build—they demolish. They are agents of destruction and they will surely destroy us if we do not repudiate them and their philosophies—along with the white racists such as Joseph Carroll and Connie Lynch—the American Nazi Party, the John Birchers, and their fellow travelers."

Agnew's audience was stunned. Many of them left before his speech was over. The liberal Baltimore journalist Jules Witcover described it as an "insulting sermon." But Pat Buchanan writes in his book The Greatest Comeback that the speech "was a major factor in Nixon’s choice of him for vice president."

Yet it also cost Agnew his reputation as a supporter of the civil-rights movement, despite his repeated denunciations of white racism in the speech. On the thirtieth anniversary of the riots, Theo Lippman, Jr. wrote a piece in the Baltimore Sun, quoting former governor Theodore McKeldin as saying, "That speech made him the darling of the Strom Thurmond set."

Can Hogan similarly stand up to the rioters in Baltimore without being consigned to today's version of the Strom Thurmond set? That is the open question. Then, as now, there is a serious issue of racial injustice and deep distrust of law enforcement in the black community.

Many Republicans dismiss black concerns about the police as irrational, but they are deep-seated and ought to be important to a party that bills itself as defending limited government. Healing these divisions may also go a long way to restoring some measure of law and order to Baltimore, a city long terrorized by violent crime and afflicted with poverty.

At the same time, Hogan must avoid being crippled by the liberal guilt that prevents some elected officials from forthrightly condemning the indefensible rioting and looting in Baltimore. Thankfully, Barack Obama is not among these timorous elected officials, but as a Democrat and the first African American president of the United States, he has more room to maneuver than Hogan.

If Hogan can thread this needle, he might someday find himself on a national ticket. Or he could at least be the first Republican governor of Maryland to win reelection since Theodore McKeldin.