The Banishment of Bannon 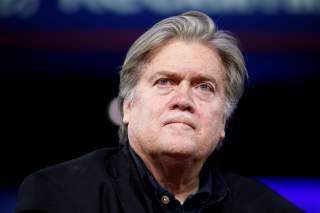 “It’s like asking me what Louie Gohmert should do next,” one experienced media hand tells me Tuesday night, comparing the ex-White House chief strategist and ex-Breitbart News chief to the colorful backbench lawmaker from Texas: a staple on the right-wing circuit, but far from the nexus of power. That’s the consensus a day after Steve Bannon’s ouster from Breitbart, headquartered in the same Capitol Hill townhouse he calls home: a defeat that’s humiliating, personal, sudden, and potentially, final. “He should just write a book. And retire. He has to walk away.”

More have piled on. “I think that was a long time coming,” Tucker Carlson said on the podcast of the London Spectator’s Freddy Gray. Alex Pfeiffer, now with Carlson’s show and formerly White House correspondent at The Daily Caller, has been saying Bannon is overrated for months, which has been gleefully highlighted by Matt Drudge, a leading Bannon hater. Julius Krein, editor of American Affairs, told me he thought much the same of the former White House chief strategist last summer.

“I think Bannon is a difficult guy to get along with in the first place. … I’ve never thought he was particularly smart. Ever. … I was never impressed by him. In fact, I thought he was profoundly unimpressive. … Sometimes the most aggressive person just bulls his way to the front, and that was what that was about, in my opinion,” said Carlson, who then alluded to old beefs from earlier this decade when Carlson ran The Caller day-to-day (he retains ownership but has relinquished control since rising to preeminence at Fox News) and Bannon captained Breitbart, “a website not so different from the one that I ran.” While conceding to Gray he thought Bannon was “sincere,” Carlson on his show Tuesday night offered a final indignity by not even covering the Bannon ouster, only noting cryptically at the tail end of his show: “You think it's going to last forever but it never does.”

Others have been quick to argue that the putsch against Bannon is a victory for “Andrew Breitbart’s legacy,” even though Mr. Breitbart was, like Bannon, deeply controversial in his own time. “My only sadness is the stain Bannon placed on Andrew Breitbart’s name,” DailyWire.com editor and Breitbart apostate Ben Shapiro tweeted. “Today, they changed for the better,” noted prominent Caller reporter Benny Johnson in a Facebook post. Scott Greer notes that he thinks this will largely not disrupt Breitbart’s operation, one way or another. “Don't think Bannon leaving Breitbart is going to mean serious changes over there. Remember he was gone from the site for a year and the site was basically the same,” Greer noted Tuesday night. “No real change,” Greer texted me Tuesday, noting Breitbart editor Alex Marlow is capable and the site is adept at getting traffic on its own.

“I think it’s a way to rebuild the relationship. Bannon falls on his samurai sword and Trump gets to forgive him and move on. DACA is far more of a risk to Trump,” Washington Examiner commentary writer Tom Rogan emailed me Wednesday. Rogan is also the host of the newly rebooted, classic Washington talk show The Mclaughlin Group. “I think there’s a 50 percent chance that Bannon will be back in the fold by after year 2018,” Patrick J. Buchanan said on the inaugural episode of the new show Sunday. Rogan went further: “I think he’s Trump’s brains. So, I’m 75 [percent].”

What does a Trump completely divorced from Bannon, policy-wise, look like? One critical area where this will be tested immediately is North Korea. And Rogan, for his part, hints at an issue that could be potentially be an early entry ramp back into primetime for Bannon. On the day Bannon was forced out from the news organization he has run off-and-on since 2012, the president was widely seen as misstepping on the issue of immigration and DACA, in televised negotiations with the Democrats. Comments Trump made to Sen. Dianne Feinstein—that he’d be open to caving on DACA with essentially no preconditions, and only a promise to handle “border security” down the line—shocked the right-wing.

Might Bannon make a play here? “It goes without saying that if Trump sells out on immigration, Bannon will be entirely vindicated,” tweeted conservative writer J. Arthur Bloom. Bannon was once rumored to be in the running to be president of The Heritage Foundation. Now Heritage is trying to invite Oprah Winfrey to speak and Bannon is further from power than he’s been since he first hooked up with Trump.