The Battle for Ukraine: Who Is Winning? 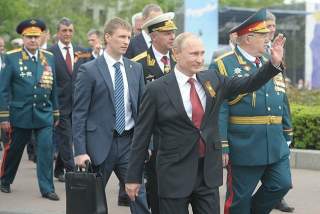 Russia’s May 9 Victory Day parade was a special occasion this year intended to mark not just the defeat of Germany in World War II, but also Vladimir Putin’s victory in Crimea. Units from the newly annexed Republic of Crimea were near the forefront of the parade. The message was clear: Russia will ultimately prove victorious as it did in WWII, though it may have to go through great hardship in the interim. Of course, this parade may prove to be the high-water mark in the recent surge of Russian patriotism and Vladimir Putin’s approval ratings. Some analysts have already concluded that Russia’s confrontation with the West could lead to a rapid decline in Russian power and the revival of NATO’s sense of purpose. Still, all of these long-term scenarios must be of little comfort to Ukraine, which is steadily descending into organized, and disorganized, chaos.

Ukraine’s future is being determined by an unpredictable battle for leverage on the ground, which has been ongoing ever since Russia annexed Crimea, and will continue until the May 25 election in Ukraine. Ultimately, whoever is elected in Kyiv will have to agree to a compromise with Moscow on the degree of structural influence it will be given in Ukraine. After the independence referendums held in Luhansk and Donetsk on May 11, that is as inevitable an outcome as it is unpalatable in Western capitals. The notion that all of Ukraine can be pulled into a Western orientation now appears unrealistic and naïve.

The remaining question is whether Russia’s efforts to improve its bargaining position in Ukraine and the interim government’s efforts to contain this sponsored separatism will lead to an escalation of the conflict. The violence in Odessa demonstrated that it could certainly spread further, but also that in other Ukrainian cities, large segments of the population are not in favor of Russia’s agenda, and if Moscow presses the matter, it could result in uncontrollable violence. This is a moderating factor, because Russia is not interested in general, disorganized chaos and instability in Ukraine. It does not want the interim government in Kyiv to have control and legitimacy in Russian-speaking areas, but it also does not want the country descending into civil war. That serves nobody’s purpose in Ukraine.

Upon annexing Crimea, Vladimir Putin outlined the terms of a prospective deal on Ukraine: Russian-speaking regions are to be given autonomy so that Russia can retain its influence, and—by proxy—a vote over Ukraine’s strategic orientation. All of this is to be codified in a constitution or written framework that devolves authority to those regions. Moscow has spent the past month orchestrating events in Ukraine to leverage such a deal into existence; a work that appears largely complete. Russia has gained enough leverage on the ground to force negotiations on autonomy, but it lacks influence over Kharkiv or Odessa, important cities and industrial centers. Its control over the two separatist regions is tentative at best. May 25 is rapidly approaching, marking a period when the dynamic in Ukraine changes and the battle for influence with it. This date cannot come sooner, since the continued crisis has spawned a veritable menagerie of paramilitary groups in support of and against the current government in Kyiv.

At the moment, Russia holds most of the cards it needs to secure the original terms of its proposal for a compromise on Ukraine. Moscow has been using the threat of invasion to establish a ceiling for what Kyiv can hope to accomplish in its military operations, lest Ukraine and the West wish to risk a Russian invasion, and they do not. More importantly, many in the West are convinced that Vladimir Putin’s true intentions are to disrupt the upcoming elections. American and European leaders have set them as the next goal post for a new phase of sanctions against Russia. Putin has little interest in either of those outcomes. He simply wants the West to reserve the truly damaging sanctions for a potential phase of this conflict that he does not plan on entering. Most in Ukraine want a legitimate government in Kyiv to close this chapter and begin restoring order in the country. Moscow is also eager for a government that it can recognize, and one that could conclude the arrangements it desires. Russian-sponsored insurgents have probably seized all the geography they can obtain without sparking a broader conflict.

After May 11, Vladimir Putin added the possibility of recognizing the independence referendums held by separatists as yet another chip of leverage to trade away at the negotiating table. Russia’s only interest in recognizing them would be if it wanted to invade Ukraine by staging a request for intervention from the newly minted “Donetsk People’s Republic”. To recognize them now could both preclude a deal with Kyiv after the election and inherently make Russia responsible for their fate. Such a step is difficult to reverse, but the threat to recognize them has a long shelf life. Moscow does not want to support these regions. Absorbing Crimea is already a significant burden on the Russian state, likely to cost billions. Russia’s natural preference is that Ukraine, and by implication, the West, continue to be responsible financially for whatever happens in the country. No matter what Russia breaks, it wants the West to keep it.

Though subtle in nature, the past several weeks have witnessed the United States and Europe steadily moving into the passenger seat of events in Ukraine. Ukraine is busily conducting “counterterrorism operations,” but it has become increasingly obvious that these are a veneer to mask Kyiv’s lack of interest in contesting the Russian-supported insurgency. President Turchynov vacillates between stating that his government is effectively helpless to restore order in the East, and vowing that counterterrorism operations will continue. Ukrainian troops seize buildings, only to let them be recaptured hours later. The casualty numbers continue to rise without any tangible gains. This confounding juxtaposition of policy statements suggests that the only purpose to such operations is as a demonstration to the West that they are backing a government willing to fight for its territory, and able to confront Russian meddling. They are intended to prop up a narrative that affirms Western policy in Ukraine, and bolsters public sentiment, but not to accomplish anything substantive.

If Kyiv was to attempt a serious assault on the separatist regions, it would result in civilian casualties, and could precipitate either a Russian invasion, or spark a genuine civil war in those regions. Both would prove disastrous for Ukraine. Given that the separatists are armed with heavy weapons, and undoubtedly led by Russian special forces, the process would be bloody and costly. Ukraine’s military has thus far proven undependable, and appears to have been hollowed out of any serious operational capability. If anything, Ukraine’s government appears to be returning to its traditional policy of finding a way to manage Western expectations and moderating Russia’s anger. Hence Kyiv is trying to do enough to satisfy the political necessities of the West, but staying short of inciting a heavy-handed Russian response. Ukraine’s interim leaders have no intention of sparking a war, or a bloodbath, with so little time left on their political clock. Whatever government comes next, it will blame them for either incompetence or belligerence. Besides, playing the middle has always been Ukraine’s political area of expertise.

Moscow’s latest turn in this crisis is an effort to distance itself from the separatists so that they can be set up as an independent group to negotiate with Kyiv. This was evident when Vladimir Putin asked the separatists to postpone their referendums on May 11, only to be ignored. The real purpose of this drama was to lessen the rationale for new Western sanctions as a punishment for the actions of the separatists. Alternatively, if the separatists prove uncontrollable or burdensome, they will have to be sacrificed like pawns. It also gives Russia the option of playing a spoiler after the elections if Ukraine does not appear willing to compromise on demands for federalism. Hence, Vladimir Putin will have the opportunity to be publicly for the May 25 election, and also dispute its results if Kyiv is not amenable to negotiations. Recent polling suggests that 63% of Ukrainians in the east believe the elections will be unfair, compared with 59% in the west, who have a positive outlook. Given this deep regional divide, contesting the legitimacy of the outcome would not be difficult for Moscow. Either way, it makes sense for Russia to start unwinding that relationship.

Western leaders have a serious problem on their hands. In the near term, Ukrainian and Western policies are increasingly divergent in nature. The West needs visible action on the ground to validate its policies and support for Ukraine. Otherwise, it appears that all it has to answer Russia are punitive sanctions, which thus far have proven completely ineffective, and those that might be effective must be kept in reserve as a contingency. Unfortunately, none of the actions Kyiv can take militarily are in Ukraine’s long-term interest. Moscow realizes this, and it also sees that it is Western leaders who need a policy “off-ramp” in the crisis. It is thus willing to support various frameworks for negotiations to keep the West occupied, and to watch Ukraine create a merry-go-round of counterterrorism operations that go nowhere.