The Big Hail Mary: Can Jack Kemp Save the GOP? 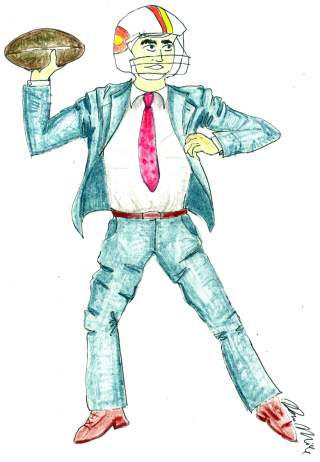 WHO WAS the last century’s most important Republican politician that failed to become president? For Fred Barnes and Morton Kondracke, the answer is Jack Kemp, the football-hero-turned-Congressman who served as secretary of housing and urban development under President George H. W. Bush and was the Republican vice-presidential nominee in 1996. In their encomium to the former football star, Barnes and Kondracke, veteran Washington journalists who were once colleagues at the New Republic, assert that Kemp deserves history’s laurels because he led the charge for supply-side economics, rallied the Republican Party and President Ronald Reagan to his cause and thereby “help[ed] to win the cold war and convert much of the world to democratic capitalism.”

Nor is this all. They add that he’s worth remembering for his inspiring life, the positive spirit and idealistic policies he brought to Washington, and the need for Kemp’s example in today’s polarized politics and anemic economy. “[W]e have written this book,” they explain, “because we believe America is in trouble, perhaps more deeply in trouble than in the 1970s. And we think that Jack Kemp’s spirit—and his policy ideas—could again help turn the country around.” And, although it’s somewhat of a subsidiary theme in this biography, Kemp is notable for his tireless efforts to enlarge the GOP’s tent by reaching out to minorities, young people, poor and working-class Americans, and other groups that did not traditionally vote Republican. Kondracke and Barnes’ account is well-written and informative, but will their paean to Kemp really serve to revive him in today’s GOP? Or did he do less to change America than they believe?

Kemp, who was born in 1935, grew up in Los Angeles, where his father owned a small trucking company and his mother was a social worker who spoke fluent Spanish. He inherited his parents’ Republicanism as well as their Christian Science faith, which seems to have instilled in him a benign view of humanity and the conviction that anything could be accomplished through will and hard work. At age five, we are told, Kemp decided to become a quarterback. After college, Kemp knocked around with several professional football teams before catching on with the Buffalo Bills. He became a star quarterback and led the team to two American Football League championships in 1964 and 1965.

The game served him well. It was on the gridiron that he developed his style of bold, offense-minded leadership while becoming inured to booing crowds. (He threw more interceptions than touchdowns.) He later remarked, “Pro football gave me a good sense of perspective to enter politics. I’d already been booed, cheered, cut, sold, traded and hung in effigy.”

His experience as president of the AFL players’ union gave him a reverence for collective bargaining that most Republicans lacked. His close friendships with black teammates reinforced his belief in civil rights, and he helped get the AFL’s 1965 all-star game moved out of segregated New Orleans. Kemp educated himself about politics and economics during bus and plane trips to away games, and he interned for California governor Ronald Reagan in 1967. Three years later, he parlayed his football celebrity into a winning campaign for the Congress, representing the mostly working-class suburbs of Buffalo. According to Kondracke and Barnes, “When Kemp arrived in Congress in 1971, he was basically a novice in economics. He’d read the free market classics—Hayek, von Mises, Friedman—but was hardly policy savvy.”

IN JANUARY 1976, Kemp crossed paths with supply-side guru Jude Wanniski, who taught him the liturgy as he had learned it from anti-Keynesian economists such as Arthur Laffer and Robert Mundell. Kemp was also close to Irving Kristol, another apostle of the Laffer credo, though Kristol later conceded that he was never sure of whether or not the doctrine would work but was convinced of its political efficacy. The essence of the supply-sider message was that conventional Keynesian economists were all wet in focusing on stimulating demand. The new theory was that tight money and low taxes would produce high growth, much as the economic boom of the mid-1960s had followed the tax cut proposed by President John F. Kennedy. It was Laffer’s belief—graphically expressed in his famous curve—that tax reduction, by stimulating production, would result in so much additional revenue that it would pay for itself. A kind of perpetual-motion tax machine . . .

Wanniski’s gospel of supply-side economics instantly converted Kemp, for reasons that Barnes and Kondracke do not fully explore. They correctly point out that he would have seen it as a way to help his working-class constituents, who were suffering from the persistent unemployment and double-digit inflation that afflicted the American economy under President Jimmy Carter. These two factors were related: inflation pushed workers into higher tax brackets, cutting into their take-home pay, while cost-of-living adjustments built into most contracts made labor prohibitively expensive for employers, especially in manufacturing cities like Buffalo that were being hit hard by overseas competition.

Supply-side economists posited that tax reduction would incentivize individuals and businesses to work and invest. This would hold down prices by increasing the supply of goods and services but avoid the severe unemployment that traditional Keynesian economists insisted was necessary to reduce inflation. (Kondracke and Barnes dismiss any such tradeoff as “dogma.”) And, in Kemp’s view, increasing the rate of savings, investment, capital formation and technological innovation was the only way to increase productivity—which, in the long run, was the only way to raise workers’ real incomes. Kemp, at least, never intended the principal beneficiaries of supply-side economics to be the wealthy few.

Barnes and Kondracke present supply-side economics as primarily a means toward the end of economic growth. Certainly Kemp wanted to avoid the social and political conflicts that he believed were inherent in stagnant economies. Supply-side economics also promised a way to reinvigorate the economy without having to cut back on the social-welfare programs that many Americans (particularly minorities and less affluent citizens) needed to make ends meet. But it’s often forgotten that GDP grew at near-historic levels between 1976 and 1978, so overcoming inflation and unemployment would have been more immediate concerns than growth in those years.

In 1977, Kemp and Senator William V. Roth, Jr., a Delaware Republican, introduced legislation to cut individual taxes by approximately one-third across the board. Kemp got the Republican Party to adopt Kemp-Roth (as the bill became known) as its official position, and he was instrumental in persuading Reagan to adopt tax reduction as the centerpiece of his 1980 presidential campaign. Following Reagan’s election, a modified version of Kemp-Roth was enacted in 1981. The measure reduced the top individual rate from 70 to 50 percent—and removed many low earners from the tax rolls altogether. Kemp then went on to spearhead the Tax Reform Act of 1986, which further lowered the top rate to 28 percent and reduced the corporate rate from 46 to 34 percent. Barnes and Kondracke hold that these two Kemp-inspired supply-side reforms were Reagan’s most important domestic achievements.

Supply-side economics scrambled the traditional battle lines within the Republican Party. Kemp formed a sort of idiosyncratic bridge between moderates and conservatives in the GOP, and many members of both camps enlisted in his crusade. Some were convinced of supply side’s economic merits, while others saw it in strictly political terms as a positive, idealistic program that would allow Republicans to stop playing Scrooge to the Democrats’ Santa Claus. Former Senator Bill Brock of Tennessee, who was chairman of the Republican National Committee in the late 1970s, told Kondracke that the party desperately needed a makeover: “We were, at least in perception, anti-women, anti-minority, anti-union, anti-poor.” Kemp’s new approach and ideas provided the “catalytic agent” needed to change the party’s image, just as Reagan reshaped conservatism with his genial and optimistic personality.

But supply-side’s GOP opponents had serious and justified reservations about the doctrine, and Kemp was too ready to dismiss them as timid, Herbert Hoover-style, “root-canal” Republicans. A case in point was a 1985 series of “Dear Republican Colleague” letters Kemp exchanged with Rep. Willis “Bill” Gradison of Ohio following Kemp’s assertion that “America can grow its way out of the deficit,” and that “Indeed, there is no other way to get the deficit down to manageable proportions.” This would be easy enough to accomplish, Kemp claimed, since tax and monetary reform would bring about five consecutive years of the 5 percent growth rates the United States had experienced in the 1960s, after which the budget would be balanced without the need for spending cutbacks. Gradison, who had taught at the Harvard Business School, declared that this rosy projection was little more than wishful thinking. (And, in fact, America has never again experienced even one year of growth as high as 5 percent, let alone five consecutive years.) “I recognize the attractiveness of a strategy that avoids difficult choices,” Gradison wrote. “But given both the consequences and the probability of being wrong,” he doubted that it was wise or responsible to “bet the country” on the assertion that tax cuts would solve the deficit. Kemp made no effective response. The present federal debt of $18 trillion is a legacy of three decades of tacit bipartisan agreement to avoid difficult choices.