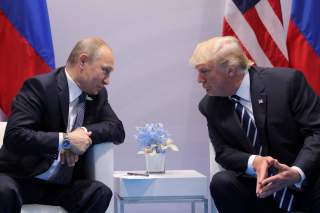 At long last, nearly six months after his inauguration, Donald Trump finally had the opportunity to meet Russian president Vladimir Putin for more than two hours on Friday at the G-20 summit in Hamburg. Cable-news networks spent the weekend buzzing, as pundits dissected the meeting to determine who won and lost what in this battle of global titans. The meeting was newsworthy mainly because it happened, not so much because of the modest agreements that emerged from it.

But for a bilateral relationship that had degraded to a more dangerous kind of postmodern Cold War since the Russian seizure of Crimea more than three years ago, and a vicious whirlwind of Russophobia in Washington after Moscow’s meddling in last year’s presidential election, a relatively normal first meeting between Russian and American leaders is a good thing. As the Washington Post’s David Ignatius headlined his Sunday column, “Diplomacy breaks out at the U.S.-Russia meeting.” Imagine that!

Trump was smart to ask Putin right off the bat whether Russia had interfered in the U.S. presidential election. And according to Putin’s remarks at a press conference on Saturday, Trump asked a number of questions around the topic. The readouts from Putin and his foreign minister, Sergey Lavrov, on this topic certainly differ from Secretary Tillerson’s characterization of the conversation. It seems fair to say that Putin and Trump agreed to disagree, but did apparently agree to establish a bilateral working group on cybersecurity to try to clarify the “rules of the road,” including a framework for noninterference in each country’s domestic affairs. While many shudder at the seeming hypocrisy of such an endeavor, there is no question that the United States needs to have a forum with the Russians, as with the Chinese and others, to discuss this critical set of issues. Don’t expect any major breakthroughs soon, but engaging in talks with Moscow on cybersecurity is also a good thing.

It has been reported that the majority of the discussion centered on Syria. This was to be expected, given hopes for transitioning away from military engagement and toward diplomacy to resolve the now six-year civil war, which has resulted in devastation to many regions of the country and the greatest humanitarian catastrophe since World War II. The ensuing agreement for a cease-fire in southwestern Syria, which included Jordan as a party and considerable facilitation from Israel, is a modest achievement for sure, and obviously there has been a long history of failed cease-fires, so this is hardly cause for great celebration. Nevertheless, it marks a positive, if small, step for U.S.-Russian cooperation in Syria. A tremendous amount of very hard diplomacy remains to address the multitude of actors, internal and external, involved in Syria.

Little has been reported at this point about discussion of Ukraine, except that it was made public that former diplomat Kurt Volker has been appointed to a new position in the State Department, special representative for Ukraine. There is some irony here, as reports suggest Secretary Tillerson’s ongoing organizational review of the State Department has sought to mitigate the recent proliferation of such special appointments. While the appointment may suggest that the Trump administration seeks a more visible role for Washington in the diplomatic resolution of Ukraine, we will have to wait and see. Certainly, nobody can accuse Trump and Tillerson of appointing a pro-Russian patsy to this important position: Volker is a very smart and experienced diplomat who has been very critical of Russia and was affiliated for some time with the McCain Institute in Washington.

Those who were fearful that Donald Trump would fall under the spell of the much more experienced Vladimir Putin can rest assured that nothing was “given” to Russia, and no concessions made. There was some speculation that Trump would return the two Russian diplomatic compounds in Maryland and New York that were seized last December, but that did not happen. On a side note, commentators and public figures alike, including Congress, almost seem to have forgotten that the Obama administration did “punish” Russia for interference into our election—by evicting thirty-five spies and seizing the two compounds. If I had a dollar for every time I heard something to the effect that “Russia hacked our election and got away with it,” I could happily retire!

Many deep-seated differences between Washington and Moscow will remain either intractable or very hard to resolve. This list includes the future of Syria, Ukraine, the INF Treaty, U.S. missile-defense deployments, North Korea, cybersecurity, European security and a host of other challenges. Whether America will be able to have a constructive relationship with Russia, as Donald Trump rightly said on the campaign trail would be a good thing, remains totally unclear. What we do know is that Trump and Putin had a very frank and businesslike first meeting that resulted in a few small agreements about Syria and cybersecurity. Perhaps for the moment the dangerous downward trajectory of bilateral relations has been halted. That is a reasonably good outcome.

Obviously, this does not solve the Trump administration’s domestic problems around the Russia investigation, nor does it really put the bilateral relationship in a significantly more positive light. The improvement of U.S.-Russia relations, in the best of cases, will be a long and winding road. One of my favorite Russian expressions is pozhivem, uvidem: “We will wait and see.” Whether this first meeting between Putin and Trump will mark a real turning point remains to be seen; we will just have to wait and see.

Andrew Kuchins is a senior fellow at the Center for Eurasian, Russian, and East European Studies (CERES) at Georgetown University.