The Budding Bromance Between Donald Trump and Emmanuel Macron 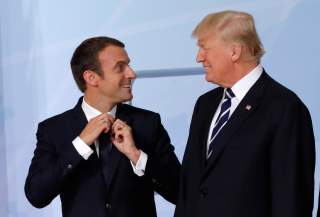 Donald Trump and his entourage touched down in Paris Thursday morning, on the invitation of French president Emmanuel Macron, to attend Bastille Day celebrations the following day. At first glance, the two are seemingly near opposites, but recent developments bely a chummier relationship than observers had originally expected. Macron appears on the verge of becoming Trump’s number one international buddy.

Initially, the invitation to the U.S. president to attend the French national day struck many as another trollish publicity stunt by Macron, the occupant of Elysée Palace who once locked Trump in a death-grip handshake. A May survey found over 80 percent of Frenchmen disapprove of the New York business mogul. And the Washington Post pointed out Wednesday that Trump has a long recent history of rebarbative remarks about Paris (complete with references to a presidential friend, “Jim,” who may or may not actually exist).

“Trump’s visit . . . has stirred some controversies in France. The American president has a terrible reputation here, to say the least,” says Cecile Alduy of Stanford. “In France, Donald Trump is the most unpopular U.S. president ever and hosting him on such a symbolic day exposes the French president to savage criticism,” adds Vincent Michelot of Sciences Po.

But Trump has shrewdly counter-trolled, actually accepting Macron’s offer. "President Trump looks forward to reaffirming America's strong ties . . . and to commemorating the 100th anniversary of America's entry into World War I,” the White House said in a statement late last month. Michelot argues it would have been a scandal if Trump hadn’t gone this year: “not having a high-level U.S. presence at the July 14 military march as we celebrate the one hundredth anniversary of the U.S. entering World War I would have sent a disastrous signal.”

And from the administration’s perspective, it also likely doesn’t hurt to get Trump out of Washington, as this week saw more concerning revelations of connections between his apparatus and Moscow. “When scandal takes hold, presidents usually look for opportunities to demonstrate they aren't prisoners in the White House,” says Larry Sabato of the University of Virginia. “There's nothing more presidential than foreign affairs and travel. Nixon, Reagan and Clinton all used international forums while under the weight of scandals.”

But spurring further intrigue, there are signs that Trump, the nationalist populist gadfly of the international scene, and Macron, the cosmopolitan champion of the European Union and liberal democracy, might actually be getting along. A senior administration official emphasized to reporters in Washington on Tuesday the number of times the two have spoken since Macron’s election victory in April, actually allowing the two to forgo a formal sit-down at last week’s G-20 gathering—since they have already built such a familiarity. The White House repeatedly characterized the early goings in the relationship as immensely encouraging, and there are signs this might be more than just puffery from team Trump. Macron’s outsized popularity in France and internationally also might be giving him more leeway than most leaders in dealing with the U.S. president, who has achieved pariah status in western Europe.

By way of example, the British parliament has tediously debated whether Trump should be allowed to visit the country for over a year, even when he was just a candidate. Macron decided he should come to Paris by swift fiat, and the U.S. president will visit Elysée and eat blue lobster in the Eiffel Tower. “Sometimes Trump makes decisions we don’t like, such as on climate, but we can deal with it in two ways: we can say, ‘We are not going to talk to you,’ or we can offer you our hand to bring you back into the circle,” government spokesman Christophe Castaner has told LCI, a French news channel. “Macron is symbolically offering Trump his hand.”

Euronews argues that Macron’s business background, which includes stints at a Rothschild investment bank (somewhat controversial during the campaign) and as economy minister, is also making him a more natural fit for Trump. “Both he and Macron have a political interest in building rapport, and both have a corporate background that may help underpin their relationship,” the outlet noted. Likely further greasing the wheels is that Macron speaks near-fluent English, and does so more openly than other French presidents, who have made the political calculation to militantly emphasize the cherished French language. Observers have noted that Trump has routinely shirked translation and earpiece software in interactions with foreign leaders, of course murdering any chance at true retention.

And in June, Macron said that there is no clear successor in Syria to Bashar al-Assad, reversing on a previous stance, and in putting him more in line with Trump, who has intermittently endorsed such sentiments, despite striking the Syrian president in April. “Only Nixon could go to China, and only Macron could have taken France out of the ‘Assad must go’ camp without anyone batting an eyelash,” Russia Insider commented.

But even more is going on here: the emerging classical liberal tendencies of Macron. The thirty-nine-year-old, who before April had never been elected to office, is a proud centrist who came to power at a relatively young age under unique circumstances. That he faced off with, and trounced, hard-line nationalist Marine Le Pen earlier this year prompted him to be embraced by much of the liberal left as a sort of bulwark against barbarism. But, aside from saber-rattling on the climate and science, he doesn’t seem to be much of a left-winger.

Macron’s appointed second-in-command, the conservative Edouard Philippe, gave remarks to the Financial Times earlier this week that should dash the hopes of any socialist supporters of Macron. FT: “When it is suggested that the government’s plans for a more flexible labour market, tax cuts for businesses and emphasis on public spending curbs were all rightwing measures, Mr Philippe bursts into laughter. ‘Yes, what did you expect?’ he says.”

And “it remains a little bit to be seen how big a backer of globalization and immigration Macron is,” says Scott McConnell of the American Conservative. “He certainly campaigned as one, but he doesn’t seem any more eager to allow migrant encampments in the north of Paris than any preceding French president. . . . That joke he made about the kwassa-kwassa—caught by an open mic—is not something that anyone genuinely steeped in Anglo-American-style political correctness would ever say.”

Macron’s popular now, but the former Socialist Party minister could soon face heat from the left. The final outcome of this week’s visit is “unclear,” notes Stanford’s Alduy. “The famous ‘virile’ handshake between Macron and Trump last time yielded no tangible result except symbolic ones for Macron. Trump still withdrew from the [Paris] agreement. Things might be warming up between them, but what matters are concrete policy agreements.” But both Macron and Trump won improbable victories and both are realists. Whether the issue is Syria or trade, this could be the start, to use Trump’s favorite word, of a beautiful relationship.