The Burkini Isn't a Religious Duty 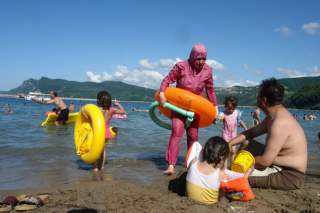 The debate over the so-called “burkini” in Europe has taken a sharp twist in the United States, emboldening those who support wearing the burkini not only as a matter of human rights but also as a matter of religious duty. This perspective on the burkini could not be farther from the truth and only reinforces the conservative Islamic view about the role of women in society.

The debate over the burkini began in France as a logical extension of the ongoing deliberations over the place of Islam in French society. The burkini controversy highlighted societal fault lines over the concept and application of laïcité, or broadly speaking, the separation of church and state. Coming in the wake of terror acts in France, the burkini affair deepened the polarization of French society when the State Council suspended the ban that was initially issued in July 2016 by the mayor of Cannes. It prevented “access to beaches and for swimming . . . to anyone not wearing appropriate clothing, respectful of moral standards and secularism.” Some hailed the decision as a victory over Islamophobia and stigmatization of Muslims, while others denounced it as an act of surrender to the creeping Islamization of French society.

Surprisingly, the burkini controversy was taken up in the United States to corroborate Islam’s outsized role in public life and to underscore Muslims’ personal relationship with God. Writing in the Los Angeles Times, Shadi Hamid asserted:

If you’re a Muslim woman who wears the hijab . . . you can’t wear just any swimsuit. Some women, of course, are pressured or even legally mandated to wear the hijab (as in Saudi Arabia and Iran), but most choose to do so; it’s about their personal relationship with God. Regardless of whether we like it, the predominant scholarly opinion today is that wearing hijab is fard, or obligatory.

This rationale not only misses the foundational ideology against which the view of women developed in Muslim society, it also reinforces the conservative and/or Islamist view concerning women and their role in society. The first Arab Umayyad dynasty expanded its rule from its capital in Damascus to Spain through military and political means, often discouraging conversion to Islam. Muslim historians accused the dynasty of relegating Islam to traditional Arab ideas and customs. Notwithstanding the fact that some Abbasid caliphs were hedonistic, the second Arab Abbasid dynasty (750–1258) inaugurated the period in which Islam (and its practice) was incorporated into religious schools, in tandem with centralized efforts to settle theological disputes, regulate society, and justify Abbasid rule on religious ground.

It is in this early period of Abbasid rule that the view of women in society took its final indisputable shape through the modern era. Building on preexisting Abrahamic beliefs and views, themes of cunning, plotting, enticing, cheating, seducing and sorcery enveloped the view of women in Arab Muslim society. With the blessing of rulers, who promoted polygamy and concubinage both as a matter of supremacy and pride, the religious scholars of Islam, the ulema, vindicated the view that women are associates of Satan and the instigators of fitna (strife). Consequently, women had to be confined and their sexual desire curbed so that fitna would not endanger the peace of Muslim society. Therefore, marriage and the veil became necessary vessels to protect society. In fact, marriage and the veil worked hand in hand in securing peace in society. They secured fidelity and inheritance, satisfied male desire and hid impotence, and most importantly, subdued women as an aspect of submitting to God.

This view of women easily trickled along the centuries. Preventing strife during period of social upheavals became a religious duty. Rebellion against a ruler was equivalent to fitna brought about by uncaged, unveiled women. Admonitions and warnings against the unveiling of women whiffed Muslim society. Sayings such as, “If the sexual organ of the man rises up, a third of his religion is lost,” and, “If the male organ rises up, it is an overwhelming catastrophe for once provoked it cannot be resisted by either reason or religion,” reinforced the obligation of veiling and caging of women, all in the interest of the welfare of Muslim society.

Not surprisingly, stories of Houb Ozri (platonic love) punctuated Arab history, literature, and poetry (Keiss and Leila; Gamil and Bousseina). And themes of suffering for love, pleasure in pain of separation, and deprivation of one’s lover were expressed in song and verse. Hub (love) leaned towards an expressive masochistic tendency taking pleasure in pain.

To be sure, with the advent of the modern era and nationalism, Muslim women and progressive men fought the strictness of classical conservatism. Women championed their emancipation in as much as they struggled for their fatherlands’ independence. Nationalist secular rule in Arab countries more or less helped improve the status of women. However, as Arab society limped into an anemic political state, conservative voices re-emerged and emphasized the equality of the sexes in Islam, but conditioned this equality on the divinely decreed differences of their natures. Conservatives (and Islamists) asserted that God created the sexes as mutually complementary halves. Whereas He gave decisive will, power of reason, and physical strength to the man, He endowed the woman with compassion, sensitivity and caring. In this sense, woman-as-rib tradition reappears in a context whereby the woman’s preponderance of emotions over rationality defined her place in Muslim society. In other words, the notion of secluding women remained valid for they were essential to raising children. Conservatives and Islamists alike have frowned upon the principle of gender equality in the public sphere.

This attitude, which gathered momentum with the decline of nationalism and the rise of Islamism, dovetailed neatly with the almost unchallenged conservative interpretation of the Koran. More specifically, the Koran, as a divine revelation that determined a sacred mandate for mankind, has been interpreted by conservative men of religion to the exclusion of female participation. Amina Wadud, an American Muslim religious scholar, challenged the traditional tafsir (exegetical work) of the Koran. Part of her argument is that traditional tafsir has been exclusively written by males. Which means, according to her, that

men and men’s experiences were included and women and women’s experiences were either excluded or interpreted through the male vision, perspective, desire, or needs of woman. In the final analysis, the creation of the basic paradigms through which we examine and discuss the Qur’an and Qu’ranic interpretation were generated without participation and firsthand representation of women.

This exclusion of the female voice in interpreting the Koran has only served the perpetuation and entrenchment of conservative values and traditions in Muslim society. Paradoxically, within the context of the Koranic Weltanschauung, or worldview, the verses that references women become secondary to the Koran’s universal mission. Therefore, the distinction between individuals saliently become neutrally gendered and based on devoutness. The Koranic verse (Sura 49:13) makes this distinction clear:

Oh mankind, We created you male and female and have made you nations and tribes that you may know one another. Inna akramakum ‘inda Allah atqa-kum (indeed the most noble of you from Allah’s perspective is whoever (he or she) has the most Taqwa (devoutness).

So when Muslim scholars assert that wearing the veil or the burkini is about the women’s relationship with God and that wearing the veil is obligatory according to predominant scholarly opinion, they are perpetuating misconceived Islamic notions and doing a great disservice to the progressiveness of Muslim females in oriental and especially occidental Muslim societies. Modesty or religiosity in decorum can be defined through means other than the burkini. In fact, garments that covered the body and/or the face have been used to advance nationalist or Islamist views and positions regardless of their religious and social values. Algerian females played a key role in the struggle for independence from French rule. Females hid bombs under their niqabs, which they detonated in restaurants frequented by French soldiers. When the French took notice and monitored niqab wearing females, militant females wore western clothes to avoid suspicion and hid bombs in their handbags. Egypt’s media in the 1940s and 1950s boasted movies and television series in which female decorum and dress were considered provocative by American standards at the time. Few females veiled themselves until the 1990s when conservatism and Islamism permeated significant sectors of Egyptian society.

Wearing or banning the burkini or veil can be debated on grounds of human rights, stigmatization of Muslims in Western society, decorum, and the spread of Islamic and Islamist values. Nevertheless, the undeniable fact is that the burkini, niqab, burqa and the veil, like other conservative traditions, are more or less the product of religio-social mores defined and shaped exclusively by conservative Muslim males.

Robert G. Rabil is a professor of political science at Florida Atlantic University. He is the author most recently of The Syrian Refugee Crisis in Lebanon: The Double Tragedy of Refugees and Impacted Host Communities (2016), and Salafism in Lebanon: From Apoliticism to Transnational Jihadism (2014). The opinions expressed in the article do not necessarily reflect those at FAU.