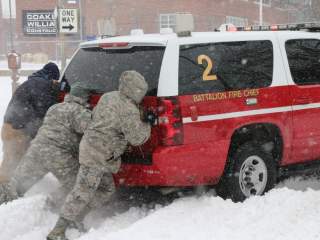 If Americans want to show the rest of the world that our country remains capable of international leadership, we may want to start by demonstrating that we can efficiently manage what many still like to call the capital of the free world. Unfortunately, the region’s response to this week’s snowstorm—and the media coverage it generated around the world—was hardly inspiring.

To be fair to regional officials, the January 2016 blizzard ranked fourth in snowfall among winter storms since 1899. As a policy matter, few governments could afford—and few voters would choose—to pay for idle plows or other equipment to clean up entirely the next day. Local governments face inherent resource constraints in dealing with any storm on this scale. This is why many citizens are willing to wait, at least for a time.

Conversely, however, the storm was not a surprise. Four days in advance, weather forecasters already saw a “crippling storm” as “somewhat likely”—a standard by which officials responsible for public safety and welfare should make careful contingency plans. Some of this clearly happened. Yet post-storm realities show that there were clearly many gaps. Fortunately for area residents, some of the worst impacts—like the large-scale power outages that could have resulted from high winds—did not materialize.

The larger problem is that local officials seem to feel little connection to or sympathy for their constituents. In the Washington area, the governors of Maryland and Virginia, and the mayor of Washington, D.C., frequently urged residents to stay off the roads and to be patient with snow removal efforts. It is less apparent what else any of them, Democrat or Republican, did to lead their respective governments during this period. Calls for patience would be far more persuasive if coupled with visible efforts from top state and local officials to take charge and make a difference.

Many area residents have been quite forgiving in this situation and some have gone so far as to organize groups to shovel their own streets rather than wait for plows. Indeed, in geographically large counties like Montgomery County (Maryland) or Fairfax County (Virginia), there will inherently be some less populated areas that officials give lower priority. In many of those cases, however, greater transparency would help residents to make plans and move on with their lives—and would not be too difficult.

Local governments clearly have systematic snow removal plans and know which streets and neighborhoods they will plow first, second and later. Unless they are sending their public relations departments into the streets with shovels, which they do not seem to have done, they also have the ability to share those plans with residents online and in local media. Montgomery County did somewhat better than others at this, with a Web site that displayed where plows were operating. What is unclear is why most officials chose not to share their plans widely, even if with bureaucratic disclaimers to explain unavoidable uncertainties.

While the District of Columbia government generally seems to have cleared downtown streets fairly quickly, and had students back in school long before other jurisdictions, D.C. officials often seem to have a casual disregard for those who work in the city without living there. One example of this is in the District government’s routine failure to manage traffic out of the city not only in snowstorms, but also during protests, special events or other predictably congested periods. Police and other government officials don’t seem to think that directing traffic (even in a “snow emergency”) is part of their job description. Ongoing problems like this are a major reason that some citizens no longer extend the District government the benefit of the doubt—and more broadly why Americans across the country are frustrated or even angry at their local and national officials. When departments of motor vehicles force long waits, potholes damage cars for weeks before being repaired and local governments seem more energetic in collecting taxes and speed-camera fines than addressing public concerns, this should surprise no one.

The D.C. government’s dysfunction was especially evident on January 27, four days after the recent storm, when there were huge rush-hour traffic jams leading to the Virginia bridges despite very light traffic on the bridges or on Virginia’s side of the Potomac River. There was no apparent effort to mitigate, much less prevent, this unsurprising result of snow-narrowed roadways on the first day that federal employees returned to work.

The following day, January 28, there was still a pile of snow blocking one lane of K Street Northwest, a major downtown artery, for no clear reason—it was big enough to interfere with traffic but small enough to remove in an hour or less with heavy equipment.

Ultimately, by falling short in meeting day-to-day expectations, and by refusing to extend the understanding they seek to residents facing their own extenuating circumstances, leaders have done little to establish a reservoir of good will upon which they could draw in extraordinary circumstances. Problems after the storm are thus seen as the rule rather than the exception.

President Obama cannot and should not try to be the mayor of Washington, D.C.—and is probably unwilling to criticize the District’s mayor or other predominantly Democratic local officials for their performance. Still, as the person responsible for America and its leadership and image, he could at least have set a better example himself, including by not disparaging his fellow residents struggling with the aftermath of the storm as somehow unaccustomed to snow. And he could have encouraged the First Lady to show a little sensitivity too, perhaps by postponing her visit to an expensive Georgetown gym the day after the storm, when local officials were asking everyone else to stay off the roads except in emergencies, and many people without tax-payer funded four-wheel drive vehicles (and immediate road-side emergency assistance) were trapped in their homes. Perhaps most important, however, he could ask federal, state and local officials across the country to show the same respect for the people they serve that he urges onto foreign leaders and governments.