The Central African Republic Is Still in Crisis. Can UN Peacekeepers Help? 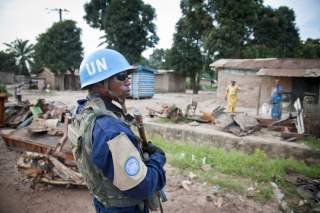 The kidnapping and assassination of senior political figures in Bangui in recent weeks, along with a number of violent intercommunal reprisals and attacks on peacekeepers, have sparked concerns the Central African Republic’s capital may be about to descend into yet another cycle of devastating sectarian violence. These recent events have already cast doubt over Pope Francis’ scheduled visit at the end of November. This is at a time when the transitional government and the UN’s newest peacekeeping mission, known as MINUSCA, are still struggling to address the consequences of September’s political and sectarian violence, which displaced tens of thousands and cost dozens of lives, all while preparing for elections next month.

The situation in CAR provides a stark illustration of the dilemma that many UN peacekeeping operations face today. The mission was urgently needed to protect civilians from widespread political and sectarian violence that began in December 2013. Yet, with only temporary national counterparts in the transitional government to work with—and multiple parties trying to prevent elections that would install a legitimate elected government—MINUSCA has encountered serious challenges in supporting a political solution to the conflict.

We had arrived in Bangui to conduct research into MINUSCA’s effectiveness only a few days before the violence broke out in late September. The abstract information we had been gathering about the mission’s attempts to protect civilians in the volatile environment of CAR suddenly became all too real on September 26, when the apparent murder of a Muslim man in Bangui sparked renewed tensions between the Muslim and Christian communities. The violence spread as political actors keen to exploit an opportunity to delay national elections stoked the conflict further. It was this type of violence, and concerns that the country was on the brink of genocide, which had prompted the UN Security Council to authorize the deployment of a UN peacekeeping mission to CAR in April 2014. MINUSCA was subsequently mandated to protect civilians under threat of violence as its top priority.

The mission has made efforts to protect civilians along several lines since its deployment. A common complaint about UN peacekeeping troops is that they are overly cautious and risk-averse, but many of MINUSCA’s troops—particularly those from regional neighbors—have been proactive and willing to engage armed groups in the country’s provinces. The mission has also made innovative use of its police component to protect civilians, creating a joint task force of police and military peacekeepers to patrol the capital and respond to urban violence. Similar innovative efforts have also been undertaken by the mission's civilian components, incorporating best practices from other UN peacekeeping operations. For example, the mission has deployed community liaison assistants to improve relationships between peacekeeping troops and local communities, and set up communication networks to allow communities to alert the mission to impending violence.

These efforts have, however, been hampered by a lack of resources. MINUSCA currently has about 10,800 uniformed personnel—2,000 fewer than its authorized strength—deployed to maintain security in a country roughly the size of France.

Despite the deeply concerning potential for violence in CAR to further destabilize the central African region, and the safe havens this may provide for terrorist and criminal networks in the Sahel to operate, the UN peacekeeping mission in CAR has received relatively little attention from the international community. That is, other than for its inadequate efforts to call attention to horrific allegations of sexual abuse by troops from a parallel French force deployed in the country, as well as similar allegations against peacekeepers serving in MINUSCA itself.

At the same time as the crisis unfolded last month, President Obama and the leaders of eight other countries were convening a high-level summit during the UN General Assembly to encourage greater global contributions to UN peacekeeping missions. As representatives delivered speeches and pledged greater commitments to peacekeeping, few offered capabilities in support of MINUSCA.

Greater contributions of military and police capabilities would improve MINUSCA’s capacity to respond to these crises, and should be sought. But even so, they will not address the root causes fueling the violence, nor the fundamental political challenges that the mission faces. As a new high-level report on UN peace operations noted earlier this year, politics must drive the design of peace operations. Political conditions were not favorable to a successful peacekeeping mission when MINUSCA was first authorized, but the international community had no other viable options to protect the civilian population.

The presence and work of MINUSCA continues to perform a critical role in attempting to reduce ongoing tensions in CAR. It undoubtedly saved lives during the September crisis. But that crisis highlighted the limits of what can be achieved by UN peacekeepers in the absence of functioning state and civil society institutions and a viable peace process. To succeed against these odds, MINUSCA will need not only more resources, but greater international and regional support to disarm the increasingly fragmented array of armed groups, establish effective and functioning governance institutions, advance justice and reconciliation efforts and oversee the conduct of inclusive and fair elections in the coming months. That will require sustained and long-term international engagement with the transitional authorities and other political actors, as well as armed groups, civil society and religious communities.

With so many forces pulling the country toward the brink of collapse, the international community must step up to provide this support.

Aditi Gorur is the director of the Protecting Civilians in Conflict program at the Stimson Center, a global security think tank based in Washington, DC. Lisa Sharland is a visiting fellow at the Stimson Center and analyst at the Australian Strategic Policy Institute. They recently returned from a research visit to the Central African Republic.