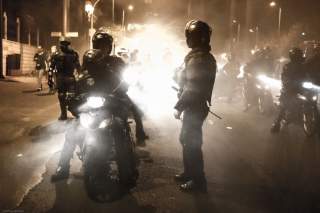 I thought summer is supposed to be a slow news season. For some, the headlines over the past several months might just be a cacophony that distracts from vacations and the beach: bloviating politicians, doomsday world leaders prophesizing about an imminent apocalypse and Asian and European markets grinding into recession. For those who are engaged in the world, however, the summer of 2015 might be the equivalent of the dark greenish sky that presages a destructive tornado.

Events that seemed unthinkable a year or two ago emerged in unison this summer: The Greek crisis and the near death of the euro, the emergence of Bernie Sanders and Donald Trump as standard bearers for political parties that loathe them, ISIS’ growth and beheadings, Pope Francis’ encyclicals that are dragging his Church kicking and screaming towards a path of reform, the plunging of oil prices and geopolitical instability stretching across every region in the world. They all seem to be tremors that in and of themselves are harmless, but when seen as a whole, they beg analysis.

Is there a common theme? Has a new zeitgeist emerged that explains this tumult both here in the United States and the broader world?

The answer is yes and no. The world we live in today perilously totters on a balance beam inspired by eighteenth-century Enlightenment philosophers and their revolutionary ideas about reason, individualism, human dignity and the casting off of repressive regimes and organized religions. The spiritual legacy of that movement has embedded in the Western world an entitlement to freedom, choice and various inalienable rights.

On the other hand, political philosophers—Aristotle, Plato and later Hobbes, Locke and Mill—justified familial, civic and government institutions on various grounds (religion can be thrown in this mix), but with the common rationale that individuals need institutions as much as institutions need individuals. A tug of war was born between government and citizens, organized religion and adherents, enterprise and labor.

World history tends to swing between these two poles. Some eras are characterized by deep trust in institutions and a willingness to sacrifice a measure of individual freedom in the interests of stronger government, larger businesses or institutional religion. And then inevitably these institutions overreach, abusing the trust to usurp more power and control, which at some point overwhelms the polity, leading to revolt. Depending on the nature of the institutional system, this can result in revolutions of the feet, at the ballot box, or behind barricades.

And that is what we are experiencing today. Poll after poll reflects a deep antipathy towards the institutions that govern our everyday lives and the leaders who guide them. From supranational organizations like the UN, EU, World Bank and the IAEA to national governments, Wall Street and organized religion, there is a feeling on the street that the little guy is sacrificing too much of his or her liberty to these institutions for a paltry return on investment. So the cycle is repeated, and we look for new institutions and leaders who tap into this current and promise, often cynically, to provide the panacea.

In 1920s Russia, there was a similar sentiment and it resulted in Stalin; in 1930s Germany, it was Hitler; in 1970s Iran, it was Khomeini; and today it is Putin, ISIS, Hezbollah and Hamas. For a number of reasons, America tends towards moderation, and our social upheavals tend to express themselves in protest and extreme rhetoric but, thankfully, no brutal dictators. However, make no mistake, our body politic today feels unmoored from the past, cynical about the future and hopelessly disgusted with our leaders.

So the headlines this summer scream in bold type the upshot of this alienation and cynicism: Greece defaulting on its debt and flirting with leaving the eurozone; extreme nationalist parties in France, Holland and Belgium winning local elections and parliamentary seats; ISIS successfully recruiting upper middle-class young adults by convincing them that a return to their “Dark Age” civilization is a safer and purer alternative than grappling with the challenges of the twenty-first century; Donald Trump’s incendiary rhetoric on immigration; Bernie Sanders, a Socialist who just happens to caucus with the Democratic Party, railing against Wall Street and the “system,” and his resonance with both White and Black America.

The seesaw set in motion by the enlightenment will never find an exact equilibrium between individualism and authority—which, to paraphrase Kant, is exactly what one would expect from a system devised by the crooked timber of humanity. Yet, when the pendulum begins to violently swing away from the belief in authority, the descent is never into a Libertarian utopia in which government magically goes away and we all go our separate ways. Rather, the polity choose a different type of authority, one that preys on fears and anxieties and descends into autocratic dystopia. Let’s hope that the summer of 2015 is just a blip on the screen and not a harbinger of things to come.

Keith Zakheim, CEO of PR firms Beckerman and Antenna Group, serves as a strategic advisor to political leaders, both domestically and internationally.