The Challenges Facing a Would-Be Coup in Venezuela 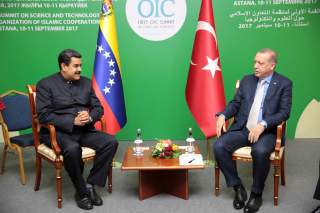 After Venezuela’s dictator Maduro won the sham elections on May 20, the Trump administration has been facing the difficult question of how to push for a transition of power in Venezuela. After a long time, high-level officials of the United States administration have started to hint at the desirability of a putsch in that Latin American country. For instance, recent remarks of Florida’s Republican Senator, Marco Rubio, and White House Senior Director for Latin America, Juan Cruz, calling for the Venezuelan army to stand against the Maduro regime, sparked a discussion of a possible military coup. Amid these discussions, some experts on Venezuela have speculated what a possible military intervention against Maduro government could accomplish.

Conventional wisdom points out that it would be unwise for the Trump administration to encourage a coup d’état in Venezuela against Maduro, who remains entrenched in power. One of the reasons is that, alongside all repercussions of a coup, the U.S. officials should not rule out the high probability of a failed coup attempt. It is also plausible to argue that the consequences of a failed plot would be of great danger for Venezuela and the entire region.

Fed up with rampant corruption, the abuse of power, and the dire humanitarian situation, Venezuelans are seeking a way out of the catastrophe Maduro has made. In a situation where the opposition is paralyzed, and other democratic options have not worked, a military intervention offers a glimpse of hope amid the worsening crisis for Venezuelan people. Some believe that a putsch will topple the Venezuelan dictatorship and pave the way for democracy is the best-case scenario. Although such a coup could eventually be the catalyst for a political change in Venezuela, some domestic and external factors illustrate the difficulty of toppling Maduro government.

First of all, the presence of an effective intelligence service made up of Cuban officers is a serious obstacle to a coup. For instance, it is a well-known fact that Venezuela is highly dependent on Cuba for intelligence. The Venezuelan government has long subsidized oil supplies to Cuba in return for military advisors and intelligence experts, as well as teachers, doctors, and other civilian experts. Hence, thousands of Cubans hold important positions in Venezuela’s national security and intelligence institutions. The most crucial role of these operatives seems to be the monitoring of any conspiracies against Maduro’s administration. This is because the overthrow of existing government will create great concern for Cuba which needs Venezuelan oil and other incentives to maintain the island’s economy. In this sense, intelligence assistance will remain essential for Cuba to protect the Maduro status quo against any alternative, including coup attempts.

Moreover, a successful military coup seems unlikely in Venezuela since high ranking officials in the military explicitly side with the regime. This means Maduro can count on strong support from his armed forces at this critical moment.

Of course, there is no doubt that keeping the army loyal to the regime constitutes one of the key objectives of any authoritarian leader. Over the last decade, military officers who were dissatisfied with the regime have been fired, whereas those who supported it have been promoted. Anticipating the threat from the armed forces, Maduro has also extensively pampered those officials by incorporating them into his cabinet or hiring them for the top of the critical institutions.

As a result, critical positions of the military are held by those corrupt individuals who have as much to lose in any political transition favoring democracy and the rule of law. They are well aware of the fact that a transition to democracy could lead them to face prosecution and long-term imprisonment on account of their involvement in corruption and drug trafficking. Therefore, high ranking military officials would remain loyal to their commander in chief.

Setting aside the intervention by high ranking officials, it would also be quite naive to expect that a coup attempt in Venezuela by mid-level officers would succeed. After all, a failed coup would give Maduro regime an excuse to repress dissidents further. Additionally, it is not hard to imagine that Maduro will reap some domestic political benefits upon the failure of the plot as other authoritarian leaders have in the past. Moreover, the response of authoritarian governments to any attempt aiming at undermining their authorities usually seems harsher than expected. The Turkish failed coup attempt in 2016 offers significant evidence for a possible outcome of an unsuccessful coup attempt in Venezuela.

“Did you see what happened in Turkey? Erdoğan will seem like a nursing baby compared to what the Bolivarian revolution will do if the right wing steps over the line with a coup.” These were the words Maduro used to describe his reaction to the failed Turkish coup. He asserted that the unprecedented purge held by Erdogan was nothing compared to what will happen in Venezuela following a coup attempt.

The world witnessed an awkward coup attempt on the night of July 15, 2016 in Turkey. A group of soldiers appeared to overthrow the Erdogan government. While complete narrative and evidence about the failed coup have yet to be clarified, the scope of the reaction by the Turkish government to the heinous coup attempt was more horrifying. The post-coup purge was unprecedented. Since the first moment of the plot, Erdogan called this failed attempt as a “gift from God.” Drawing on this “gift,” the Turkish government declared a state of emergency only a few days after the coup attempt. Under the state of emergency, Erdogan carried out a large-scale crackdown by conducting a widespread purge in civil and military institutions including many who had no connection to the coup. The government also used the state of emergency to shut down several media and civil society organizations and arrest journalists and civil servants for their alleged links to the group which Erdogan blames for the botched coup attempt.

Erdogan used the coup attempt as an excuse to eliminate the opposition and fortify his absolute monopoly over democratic institutions. Throughout this process, democracy, the rule of law and human rights records were severely undermined in Turkey. The latest report by Freedom House illustrates the scope of Turkey’s downward spiral—Turkey’s status which was reduced from “Partly Free” to “Not Free.” The coup also played a significant role in spurring the AKP government towards more authoritarianism.

Moreover, Turkey has been somewhat isolated diplomatically since the July 2016 failed coup. Shortly after the failed attempt, pro-government media circulated reports noting that the United States had orchestrated the coup against Erdogan. Ankara`s relations with the United States and other Western allies have further deteriorated. Amid this isolation, Russia took advantage of increasing anti-western anger in Ankara to build its influence on Erdogan. The Russians promoted some stories highlighting that Russian intelligence had saved Erdogan by providing him advanced warning of the coup. After the abortive coup attempt, the relations between Turkey and Russia have highly intensified. Amid the rapprochement between Ankara and Moscow, the Eurasianist clique within the Turkish army which long aspired to be closely aligned with Russia emerged holding key positions following the coup attempt.

Following an unsuccessful military uprising in Venezuela, we would witness the same worrying backlash that occurred in Turkey, if not worse. The embattled president Maduro will further cement his repressive rule, tightening his grip on power. The government will take additional steps to centralize its power further, pushing for extraordinary measures. With this, the opposition would thoroughly be frightened and disempowered. A handful of patriotic, democratic, and honest military officers would be purged and persecuted by the Maduro regime. Finally, a failed coup could further cripple political stability in a country already mired in turmoil.

A coup plot which will make Venezuela more unstable and pose severe challenges in the near term will undoubtedly impact U.S. interests as well. It will justify the traditional discourse of leftist governments in the continent that highlights U.S.-led international conspiracies to overthrow the anti-U.S. governments. It could also prompt Venezuela to rely more heavily on Russia in response to the coup attempt, as the Turkish government did after its coup attempt. Needless to say, the Russians will continue to pursue opportunities that will solidify their role in the consolidation of Maduro’s power. As a result, there is little doubt that the United States will entirely lose its minimal control over Venezuela.

While the Trump administration is clearly signaling a coup in Venezuela, the lessons of the Turkish failed coup attempt should be taken into account. If the military takes a step against Maduro government and does not succeed it, it will likely have adverse consequences. A destabilized and unpredictable Venezuela following a failed coup will be more costly for the people of Venezuela and also the region. It may result in an expansion of Venezuela’s humanitarian crisis that has already had a substantial impact in the region. For the Trump administration, pushing for international pressure on Venezuela seems like a more plausible solution than opting for a coup which would bring more uncertainties.