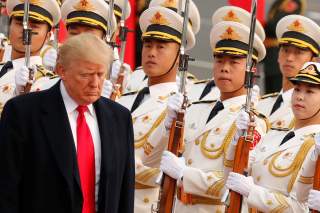 NO ONE can say we didn’t see it coming. Since the end of the Cold War, and even before, it has been obvious that a rapidly rising China could eventually menace America’s position and influence in East Asia—and, perhaps, globally as well. Since the Taiwan Strait Crisis in 1995–96, moreover, there have been accumulating signs that Beijing is not a status quo power, but rather one determined to reshape the East Asian order. For decades, then, there has been no shortage of warnings about the emerging China challenge.

As early as 1975, Henry Kissinger predicted, “If they keep developing the way they have, they could be a pretty scary outfit.” In the 1980s, Pentagon analysts worried that the long-run “possibility of Chinese conflicts with U.S. allies and friends and the United States itself cannot be excluded.” After the Cold War ended, the George H. W. Bush administration speculated that Washington might have to “contain, or balance” Beijing. By 1997–98, the CIA was publicly reporting China’s determination “to assert itself as the paramount East Asian power,” and even to become a global power “on a par with the United States by the middle of the 21st century.” And in the early 2000s, Andrew Marshall—the legendary director of the Office of Net Assessment in the Department of Defense—argued that America must gear up “for a long-term competition between the US and China for influence and position within the Eurasian continent and the Pacific Rimland.” All of this, besides warnings by prominent intellectuals such as Robert Kagan, Aaron Friedberg and John Mearsheimer, who predicted—as early as the mid-1990s—that China’s rise was likely to be disruptive.

Today, these warnings increasingly seem vindicated. From China’s maritime expansionism and illegal island building in the South China Sea to its efforts to coerce and intimidate neighbors from India to Japan, from ambitious geoeconomic projects meant to draw surrounding countries more deeply into its grasp to a multidecade military buildup shrouded in opacity and deception, there is abundant evidence that Beijing seeks to dominate its periphery. As Adm. Harry Harris, the commander of U.S. Pacific Command, remarked in 2016, one would “have to believe in a flat earth” not to perceive China’s agenda. Indeed, Chinese leaders themselves have become quite candid about the country’s vaulting geopolitical ambitions. In October 2017, at the Nineteenth National Congress of the Chinese Communist Party, President Xi Jinping proclaimed that China had entered a “new era” and could now “take center stage in the world.”

The point at which the Chinese threat goes from a distant prospect to an urgent near-term reality is thus rapidly approaching, if it has not already arrived. For years, American strategists have known this moment was coming—yet Washington consistently has been slow to react. The rapidity of China’s rise has been matched by the lethargy of America’s response. Understanding why is critical to addressing that challenge in the years ahead.

TO BE clear, America has not simply stood aside as China reaches for regional hegemony. After the Cold War, Washington maintained a powerful military presence in East Asia, partially as a check on a potentially aggressive China. Since then, America has periodically modernized its bilateral alliances, developed deeper partnerships with non-ally countries such as Singapore and Vietnam, built and deployed new and advanced military capabilities to the region, and designed creative operational concepts. From the Bush-era “transformation agenda” to AirSea Battle and the Third Offset Strategy, the China threat has never been far from Pentagon planners’ minds. From the mid-2000s onward, in fact, the Pentagon gradually shifted a larger proportion of its air and naval forces into the Asia-Pacific region, as part of a quiet rebalance under George W. Bush and a more ostentatious version under Obama. Meanwhile, the United States has sought to prevent China from bullying its neighbors—by sending two carrier strike groups to deter potential action against Taiwan in 1996, for instance—and it has worked to strengthen regional diplomatic resistance to Beijing’s assertiveness in the South China Sea and elsewhere. None of this has been lost on Chinese observers, many of whom accuse America of seeking to thwart Beijing’s ascent.

What is also clear, however, is that these efforts have not kept pace with the challenge. The regional military balance has shifted sharply in China’s favor: the RAND Corporation reported in 2015 that the Asia-Pacific was “approaching a series of tipping points” at which Beijing might believe it could successfully use force in crises involving Taiwan or perhaps even the South China Sea. “By next decade,” another close observer predicts, “China’s military buildup will give it the ability to dominate the air and sea lines of communication in the western Pacific.” The United States has also struggled to respond to Chinese coercion short of war; it has largely failed, as former Obama administration officials have acknowledged, to prevent Beijing from dramatically strengthening its position in the South China Sea through island building and intimidation of neighboring states. China’s economic tentacles have spread across the region, giving Beijing increased leverage in countries as far afield as Australia. The president of the Philippines, Rodrigo Duterte, exaggerated when he said in 2016 that “America has lost” in the Asia-Pacific, but the situation has grown steadily grimmer.

And far from systematically containing China, the United States has powerfully assisted its rise. By opening U.S. markets to China, bringing Beijing into the World Trade Organization, and promoting technology transfer and foreign investment in China, America has contributed enormously to China’s astonishing economic growth. Moreover, America has encouraged China to increase its international reach by pushing Beijing to become more involved in addressing challenges from climate change to nuclear proliferation. It is hard to square the accusation that America “is bent on containing China,” as Hillary Clinton pointed out in 2010, with the reality that “China has experienced breathtaking growth and development” since reestablishing relations with the United States.

For historians looking back on this period, America’s behavior will present a puzzle. Hegemonic powers are not supposed to tolerate, much less assist, the rise of challengers; they are supposed to fiercely and even violently resist. Was it not “the growth of Athenian power and the fear which this caused in Sparta” that led to the Peloponnesian War? So why has the United States responded so counterintuitively to the rise of such a formidable rival?

Part of the answer undoubtedly lies in the particular strategies China has pursued to dull America’s response. From the late 1980s through the late 2000s, China adhered to Deng Xiaoping’s dictum: “Hide our capabilities and bide our time.” Accordingly, Beijing sought to project an unthreatening image and stressed its commitment to rising peacefully, so as to avoid conflict even as it assiduously developed “comprehensive national power.” After 2008, Chinese behavior became more truculent, as the global financial crisis and perceptions of American retrenchment convinced China’s leaders that the country’s geopolitical window was opening. But even as China started pushing harder throughout the region, it did so via incremental tactics—island building, using paramilitary and Coast Guard forces to control disputed areas in the South China Sea, and taking other measures short of war—that were deliberately designed not to provoke a U.S. military response. Give credit where due: China has proven adept at strengthening its position while limiting resistance to its rise.

Yet if these strategies have proven effective, it is also because America has constrained itself. Over the past quarter century, U.S. policy has been shaped by a set of core ideas about how best to respond to China’s emergence. All of these ideas were sincere and well intentioned, all contained elements of real insight, and in many cases they were reasonable and even arguably appropriate, given the context in which they took root. But all these ideas pointed in the same direction—toward policies that now appear to represent more of an underreaction than an overreaction to China’s rise—and they seem increasingly suspect today. Good policy begins with getting the underlying ideas right. When it comes to China, America is overdue for an intellectual reset.

THAT RESET should begin with the idea that China will inevitably—if perhaps only eventually—become a satisfied democracy at peace with its neighbors and the world. This belief took root at the outset of the post–Cold War era, when authoritarian regimes were tumbling everywhere, and the Chinese government, which had been badly shaken during the Tiananmen Square protests, looked like the next to fall. By 1993, predicted Winston Lord, the former U.S. ambassador to China, “There will be a more moderate, humane government in Beijing.” A more democratic government, in turn, would presumably be more peaceful in its foreign relations and more positively disposed toward the United States. The reconsolidation of the Communist regime in the early 1990s was thus an ideological cold shower of sorts, for it indicated that history had not yet ended in Beijing. In response, however, U.S. officials simply tweaked the argument.

The Chinese dictatorship might be here to stay in the short term, they acknowledged, but surely it was unsustainable over the long run. In the meantime, promoting greater trade ties with Beijing would hurry the inevitable along by hastening the development of a middle class that would demand greater political rights. Indeed, promoting globalization and promoting democracy went hand in hand, because greater commerce would expose Chinese citizens to liberalizing currents from abroad, and because only truly free societies could compete in an integrated global market. “The more China liberalizes its economy, the more fully it will liberate the potential of its people,” Bill Clinton argued. “And when individuals have the power, not just to dream, but to realize their dreams, they will demand a greater say.” The crucial implication was that the United States could trade freely with China—and thereby contribute to Beijing’s skyrocketing national wealth and power—without fearing the geopolitical consequences, because the forces of economic modernization and integration would ultimately transform the regime. “Trade freely with China,” George W. Bush remarked, “and time is on our side.”