The Clumsy Case for U.S. Intervention in Syria 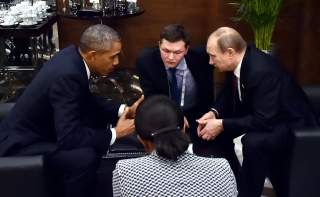 Those who advocate a deeper U.S. intervention in Syria against Bashar al-Assad’s regime have a difficult case to make. The risk that such an intervention would lead to a serious showdown with Russia is real. Russian air, land and naval forces are all present in Syria, meaning there is a real chance American strikes would inadvertently kill Russian personnel or destroy their equipment. Even if this doesn’t happen, Russia surely won’t be happy with an attack on its ally, and may take steps to respond, in Syria or elsewhere. A direct confrontation with a nuclear-armed great power would be the most serious crisis in U.S. national security since the end of the Cold War. Intervention advocates owe it to the public to take these concerns into account, and show that in spite of them, war is still the best choice. Specifically, they need to prevail on three points:

• First, they must explain how they intend to control the risks of confrontation with Russia over Syria in the wake of a U.S. attack, particularly if Russia takes steps to escalate.

• Second, they must identify vital U.S. interests at stake in Syria that justify taking such risks, especially given the chance that Russia will act against U.S. interests elsewhere.

• Third, they must show that intervention will be effective in defending those interests.

An argument that fails on any of these three points needs to go back to the drawing board, as an intervention that is ineffective, that risks uncontrolled escalation, or that is not tied to vital American interests is simply not worth the danger.

Unfortunately, a recent, widely praised essay calling for intervention fails on all three points, and fails by default: it does not attempt to explain how to control escalation, what critical American interests intervention would serve, or why intervention would be effective. Writing in the Washington Post, former anti-ISIS coalition head Gen. John Allen and respected terrorism expert Charles Lister state that “it is time for the United States to act more assertively on Syria.” Specifically, we should “save Aleppo” by giving moderate rebels more weaponry, and giving it to them faster than we’ve done before; at the same time, we should initiate a new push for a cease-fire in Syria “in which flagrant violations will be met with targeted U.S. military consequences.” This, they argue, “would almost certainly result in the eventual use of targeted, punitive force in Syria” by a U.S.-led “coalition of the willing.” The coalition’s attacks ought to hit “Syrian military facilities and assets involved in supporting the bombardment of civilians, such as military airfields, aircraft, weapons stores and artillery positions,” and also may include “a task force of regional Special Operations forces, which could play an advisory role in assisting vetted opposition groups in attacking regime assets.”

So what about the risks of confrontation with Russia? Allen and Lister acknowledge them, but they offer no account of how these risks are to be controlled: “We should expect the possible intentional co-mingling of Syrian and Russian forces and assets as a deterrent [against a strike]. While this may complicate targeting strategies, we should not miss the opportunity to hit offending Syrian elements and units, while sustaining counter-Islamic State operations elsewhere.” Given the confusion and uncertainty that pervade warfare, there is some chance we’d accidentally kill Russians; Allen and Lister’s wording also does not rule out attacks on key targets where we know Russians will be killed. Either way, their assessment of Moscow’s motives in Syria suggests escalation is a real possibility: “Russia will determinedly protect its interests by any means.” What if those means include, as Russian military officials have hinted, shooting down American aircraft? How would we respond?

If a spiraling confrontation resulted, it’s worth remembering that Russia’s large nuclear arsenal makes it the only country that can pose a truly existential threat to the United States. But Russia can challenge the United States with actions that stop far short of nuclear war. Within Syria, for example, it could turn its air-defense radars on American aircraft operating against Islamic State, and it could encourage Assad to do the same, forcing American pilots to choose between attacking those radars, operating under the threat of “ambush . . . ‘with virtually no warning,’” or accepting a less efficient standoff anti-ISIS campaign. (The latter option would seriously hinder Allen and Lister’s goal of “sustaining counter-Islamic State operations elsewhere.”) Outside Syria, Russia could ratchet up tensions in Europe, conduct cyberattacks, accelerate its disinformation campaigns, or cozy up with China (which would also be unhappy with an American strike). Iran, too, would be furious after a U.S. strike on Assad, would be at risk of losing personnel in that strike, and would have its own (less dangerous) methods for responding.

But of course, foreign policy is risky business, and severe risks like these can sometimes be justified if the interests at stake are sufficiently valuable. What crucial U.S. interests are at risk in Syria? Allen and Lister don’t say directly, although they warn that “the consequences of continued inaction are dreadful.” The consequences include that “the world will not forgive us for our inaction,” that Assad will not move toward transition, and that the fight against ISIS, a mere “symptom of the civil war,” would thus be stalled. Further, an opposition defeat in Aleppo “would dramatically empower extremist narratives. Groups linked to al-Qaeda would reap the rewards of our shortcomings.” They offer “four justifiable objectives” for an intervention: “to end mass civilian killing; to protect what remains of the moderate opposition; to undermine extremist narratives of Western indifference to injustice; and to force Assad to the negotiating table.” And, in closing, they add that “the credibility of the United States as the leader and defender of the free world must be salvaged from the horrific devastation of Syria. It is not too late to enforce international law and norms.”

Let’s unpack these one by one. What will happen to American citizens, their freedom, and their prosperity if “the world will not forgive us”? Who speaks for “the world,” and what consequences do they impose on the unshriven? If the world is capable of punishing the United States for not punishing Assad, wouldn’t the world also be capable of dealing with Assad itself? There may be particular people in the world who are angered, such as extremists. But it’s not certain that losing in Aleppo will “dramatically empower extremist narratives,” or at least not ones about the United States. The whole point of Al Qaeda, for example, was a strategic calculation that the United States, as the patron of Middle Eastern regimes, would never allow Islamic extremists to prevail, and should therefore be attacked first. It is a narrative of American action, not American inaction; extremist narratives like these won’t be empowered by American inaction. Further, the significant extremist presence among the rebels, including in Aleppo, is no secret. A defeat might just as well discourage the extremists’ potential supporters, as has been the case with ISIS; the forces that actually caused the defeat (Assad, Iran, Russia, Hezbollah and so forth), rather than a third party like the United States, would be natural targets for any extremists who are energized by losing.

What about the need to transition Assad from power? America has survived forty-five years of rule by one Assad or another in Syria. Assad’s continued role does close some pathways to peace, and continued conflict there does have negative consequences for American interests. Proxy fighting and refugee flows have destabilized the regional order. The deepening Russian and Iranian roles have permanently made the eastern Mediterranean a bit less safe for American presence. But none of these are vital dangers to America; the same is true of the other risks Allen and Lister identify, such as mass killings or the defeat of moderates among the opposition.

And what of the dangers to American credibility? Daryl Press’s research on credibility has suggested that “power and interests in the current crisis - not past actions - determine the credibility of a threat.” And America’s power and interests in Syria are each limited, the former by the Russian presence and the situation’s complexity, the latter by the limited damage events in Syria can cause to America itself. That gets to the most serious gap in Allen and Lister’s argument: whether intervention would be effective. At no point do they explain how it will be. They talk about past failures of other U.S. policy approaches, and add that although they’ve said there will be no military solution in Syria, “the Russians and their allies have pushed the military dimension of the crisis to strengthen the regime’s political position.” They discuss how resilient and brutal the Russians have been in pursuing their goals, and note that the Russians do not expect the United States to escalate the conflict. They then step down from the strategic to the operational level, and discuss ways the United States can escalate, things it should destroy, people it should arm and that the regime might divert forces away from Aleppo.