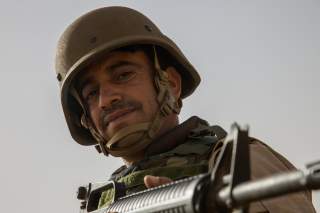 On the plane trip back from a meeting in Pakistan on March 2, Turkey’s President Recep Tayyip Erdogan threatened to expand Turkey’s role in the Syrian conflict. “After the liberation of al-Bab from Daesh [ISIS] terrorists, Turkey’s new target in Syria is Manbij. Manbij is a city which belongs to Arabs, and the Syrian Democratic Forces [SDF] must also not be in Raqqa,” he told reporters, referring to ISIS by its Arabic acronym.

The statement represents a challenge to American policy in Syria, and indirectly to American special forces, who are deployed with the SDF in combat operations against ISIS. Since last year, the United States has committed dozens of special operations forces to bolster Kurdish fighters and their Arab allies in eastern Syria. This is the second time Erdogan has threatened to expand Turkey’s role in Syria, which has been aiding mostly Sunni Arab rebel forces that oppose the regime of Bashar al-Assad. Before leaving for Pakistan he also threatened the Kurds, saying Turkey would move towards Manbij.

His comments came after Turkey’s Daily Sabah claimed on February 25 that Gen. Joseph Votel, commander of U.S. Central Command, made a “secret trip to northern Syria.” Votel also told U.S. reporters that he was “very concerned about maintaining momentum in Syria” and that “it could be that we take on a larger burden ourselves.” Read between the lines, and this means more U.S. ground troops. Americans have already upped the tempo in Iraq’s Mosul offensive, moving troops closer to the front than at any time during the two-year war on ISIS.

Turkey’s threats occur amidst U.S. president Donald Trump’s vow to defeat ISIS and his demands that the Pentagon present him with a new plan on how to do so. What the United States fears is that its Kurdish allies in Syria will be drawn into a conflict with its Turkish allies. This has been a major headache for U.S. planners, particularly at the CIA and Defense Department, as divergent agendas and differing friends have led to a Janus-faced policy. On one hand, Turkey is one of America’s closes allies in the region and a NATO partner. Soon after he was sworn in as CIA chief, on February 9, Mike Pompeo made a trip to Turkey. But at the same time, the Defense Department is shoring up ties with the Kurds, supplying vehicles and other hardware.

Turkey has expected improved ties with the Trump administration, but it also wants to test the new team to see how closely those ties will bind. Turkey will try to push the SDF back across the Euphrates. However the Kurds and their allies fought a difficult battle to eject ISIS from Manbij, and they won’t surrender it so easily. To avoid doing so, they may work with the Syrian regime and, according to recent statements, hand over some villages to the Syrian army, because they know Turkey fears being drawn into direct contact with Syria and Syria’s Russian ally.

Erdogan views the Kurdish forces in Syria as “terrorists.” In a recent interview, he said, “It is impossible that Turkey accepts the presence of armed terrorists along its border.” Referring to the fighters that the United States has been working side-by-side with, and that have played the largest role in defeating ISIS, as “terrorists” puts Turkey deeply at odds with the United States. Turkey would like to encourage U.S. policymakers to support a Turkish-backed rebel offensive on Raqqa. Anyone looking at a map of Syria knows that such an offensive cannot work except by removing the Kurdish-backed forces and cutting off their backing from the United States.

Is Ankara on a collision course with Washington over the next step? Both sides have to tread carefully; as ISIS’s defeat looms, there is a scramble to fill the vacuum it is creating. The presence of Turkish and American special forces, warplanes and armored vehicles so close to one another creates the chance for an accident, like the one that befell a Russian jet near the Turkish border in 2015.

The larger picture is that Turkey wants to see how far Trump’s support for America’s Kurdish allies will go. Trump has been tight-lipped about the Kurds, and his senior military and political advisors have as well. Nevertheless, Brett McGurk, a holdover from Obama’s White House who is the special Presidential Envoy for the Global Coalition to Counter ISIS, is well aware of the key role Syria’s Kurds have played. Trump chose to keep him.

Turkey has other assets that can challenge Trump’s policies. In northern Iraq, Turkey has carried out airstrikes against the Kurdish PKK, and Turkey maintains bases in Iraqi Kurdistan. Turkey wants to protect Sunni Arabs and Sunni Turkmen in northern Iraq, while the United States is working more closely with Baghdad, which opposes Turkey’s presence. Turkey’s goal is to carve out a sphere of influence—and it will see how far it can push that sphere, even at the expense of U.S. policy.

On March 6, events around Manbij, the center of Turkey's attention, took a new turn as the Pentagon said U.S. troops were in the vicinity “to deter all parties from fighting anybody other than” ISIS. A column of armored vehicles flying large American flags was photographed near Manbij and distributed to Western media. Pentagon spokesman Capt. Jeff Davis said it was a “visible sign of deterrence and reassurance.” This development, along with reports that Russia and the Syrian regime were involved in planning a way for Syrian regime forces to man a buffer between the SDF and the Turkish-backed rebels, creates a complex situation designed to deter Turkey from further moves. But with the Syrian regime, Kurds, the SDF, the United States, Turkey and Syrian rebels all operating in close proximity, the risk of conflict between the sides grows—and groups with an agenda to start such a conflict, such as local rebels who might benefit, will be tempted. Moreover, it is a welcome distraction for ISIS.