The Complex Calculus of the Ukraine Crisis 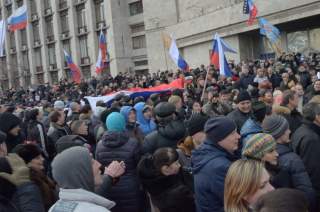 It is interesting that the U.S. Department of State and various European Union leaders are demonstrating extreme interest in Ukraine’s May 25 Presidential elections. This suggests that they recognize the illegitimacy of the self-appointed authorities in Kiev and their patent inability to establish even a modicum of order. But rather than attempting to press Kiev to seek a resolution with the protesting southeast regions, the emphasis is on legalizing a pro-western government, which would thereby obtain a formal basis for harshly suppressing the opposition and for imposing an anti-Russian course on the country.

If chaos and instability in Ukraine’s southeast, where more than 12 million people live, is in the national security interests of the United States, then holding elections on May 25 under the Ukrainian government’s current policies (the “anti-terror operation” and the refusal to engage in negotiations) is a good way to achieve it. The aim, of course, is that the winner will represent the western part of the country (this role, as approved in Washington and Berlin, will be taken by oligarch Petro Poroshenko), the situation in the country will stabilize and the protesters in the southeast will lay down their arms and go home. But the tone which Washington has adopted toward Moscow rules out Russia’s real assistance in realizing such a plan. On the contrary, it pushes Moscow towards all kinds of support to protests in eastern Ukraine and to refusing to recognize election results in much of the country.

At the same time, President Vladimir Putin’s statement to the effect that “holding of the Presidential elections is a path in the right direction” provided a weak basis to hope that Russia will be prepared to acknowledge the results of the Presidential elections despite their predetermined results. It is obvious that to achieve this it would be necessary to meet a number of conditions. These conditions have been repeatedly formulated by lawful representatives of regional communities—the regional and city councils of the Donetsk and Lugansk regions.

But the Kiev authorities have not made a single step towards meeting these requirements. Only abstract promises on “decentralization” against the background of criminal prosecution and arrests of activists—at that time unarmed.  This stimulated radical protest activity including the capture of administrative buildings and armories. It would be absurd to state that Russia did not support protests. Of course it did—and this was entirely predictable.

What did the Ukrainian authorities and their powerful patrons in Washington and Brussels expect? Strengthening the openly anti-Russian authorities in Kiev is obviously a serious threat to the security of Russia. In any case, there were no grounds to believe that Russia would react differently to Ukraine’s transfer to U.S. geopolitical control. The unexpected “Crimean operation” was, in fact, quite predictable. And, in my view, Putin was ready to limit himself to Crimea. But all along, the West underestimated Putin’s readiness to guard Russia’s interests in the “geopolitical buffer,” as Stratfor’s George Friedman refers to Ukraine.

Yet Putin also underestimated Washington and, especially Berlin. As a result, these geopolitical opponents became involved in building extremely dangerous tension. The State Department and also Berlin supported the Kiev authorities unconditionally, without displaying willingness to find a compromise with Moscow. The weak Kiev government, which is not capable of controlling post-Maidan paramilitary groups with a strong ultra-right element, and that is leaning for sympathy on the Obama administration, decided that it could forcefully curb protests in the southeast. Moscow, in turn, simply raised the stakes in the place where it was easiest—in a region where a high percentage of the population has pro-Russian sentiments—in the Donets basin (as also known as the Donbas).

This text was written right after the referendum in the Donetsk and Lugansk regions. Before using force, including heavy armored vehicles and aviation, any responsible authorities would first have found out what the attitude towards them in this region was. On the eve of this anti-terrorist operation, a poll of the district population was commissioned by a publication sympathetic to the Kiev government. According to this over 70% of citizens of the Donbas region believe the Kiev authorities are illegitimate.

This poll was carried out before the tragic events in Odessa and Mariupol. One may be sure that these events, which claimed the lives of dozens of peaceful citizens, did not improve the attitude in the southeast toward Kiev. Acting President Oleksandr Turchinov should have recognized that local populations in the Donbas support the protests.   Nonetheless, the military operation was not stopped despite failing to attain a single goal and peaceful citizens continuing to die.

It goes without saying that the referendum held in the two Donbas regions did not correspond to Ukrainian legislation and generally accepted democratic standards.  Nevertheless, Kiev does not possess the right to ignore the opinions of millions of its fellow citizens.

It was not a positive development for the leaders of self-proclaimed Donetsk and Lugansk Republics to apply to the leadership of Russia to accept them as part of the Russian Federation.  But we may be witnessing the start a real peace process and real negotiations between Kiev and the Donbas region. Negotiations involving the OSCE, which could be completed with an agreement granting Donbas broad autonomy within Ukraine, would have to be accompanied by international guarantees. There is a problem that may soon crop up, however: competition among different regional political entities for the right to represent interests of the Donbas region in negotiations with Kiev. Finally, events in Ukraine plainly demonstrate the lack of any future for geopolitical policies in Ukraine based on the principles of “a zero sum game” where the “winner takes all.”   Washington and Brussels base this policy on the erroneous idea of Ukraine as just another Eastern European country whose population is burdened by its dependence on Russia and that dreams of dispensing with it.

The symmetrical notion that Ukraine is part of “the Russian world” and should remain in the sphere of monopoly influence of the Russian Federation, as it used to be for centuries, is also mistaken. Resolution of the current Ukraine crisis preserving Ukraine’s territorial integrity (without Crimea, which is lost irrecoverably) is possible only through a mutual withdrawal of both the West and the Russian Federation from claims to include Ukraine into sphere of their monopoly influence. It appears that the opposing parties are almost ready to understand this reality.

Mikhail Pogrebinsky is a political analyst and director of the Kiev Center of Political Research and Conflict Study.